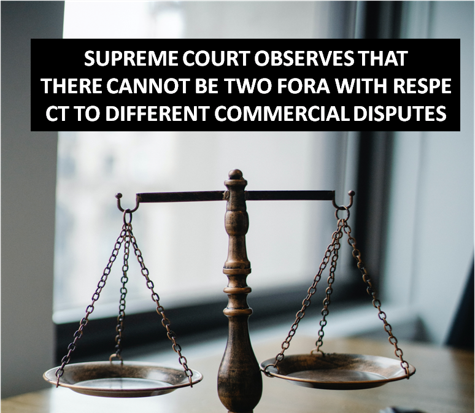 A Two Judge Bench of the Supreme Court presided by Justice MR Shah and Justice Krishna Murari passed a Judgment dated 19.10.2022 in Jaycee Housing Pvt. Ltd. & Ors.Versus Registrar (General), Orissa High Court, Cuttack & Ors in Civil Appeal No.  6876 OF 2022 and two other connected petitions and decided upon the enforceability of Notification dated 13.11.2020, issued by the State of Odisha through its Principal Secretary, Law Department in establishing the Court of the Civil Judge (Senior Division) as Commercial Courts for the purposes of exercising jurisdiction and powers under the Commercial Courts Act, 2015 (hereinafter referred to as the Act, 2015).

In exercise of powers conferred by Section 3 and subsection (1) of Section 9 read with Section 10 of the Odisha Civil Courts Act, 1984 and Section 30 of the Act, 2015, the State Government on the recommendation of and after consultation with the High Court of Orissa released notification for establishing the Courts of Civil Judge (Senior Division) as Commercial Courts for the purposes of exercising the jurisdiction and powers under the Act, 2015.

The Jaycee Housing Pvt. Ltd. & Ors (original writ petitioners), Appellants initially filed the proceedings under Section 34 of the Arbitration and Conciliation Act, 1996 (hereinafter referred to as the Arbitration   Act,   1996) in the Court of learned District Judge. However, on establishment of the Commercial Courts under the aforesaid Notification, the said proceedings were transferred to the Commercial Court i.e.,the Court of Civil Judge (Senior Division) [designated as Commercial   Court].   Therefore,   the Appellants herein challenged the aforesaid Notification and designating the Courts of   Civil Judge (Senior Division) as Commercial Courts under the Act, 2015 before the High Court by way of present writ petitions.

Whether in exercise of powers under Section 3 of the Commercial Courts Act, 2015, the State Government can confer jurisdiction to hear applications under Sections 9, 14 and 34 of the Arbitration and Conciliation Act, 1996, upon Commercial Courts which are subordinate to the rank of the Principal Civil Judge in the District, contrary to the provisions of Section 2(1)(e) of the Arbitration Act?

The Hon’ble Apex Court observed that the Objects and Reasons of Commercial Courts Act, 2015 is to provide for speedy disposal of the commercial disputes which includes the arbitration proceedings.   Therefore, in order to achieve the said Objects, the legislature in its wisdom has specifically   conferred   the   jurisdiction   in   respect   of arbitration matters as per Section 10 of the Act, 2015.  Further that the Act, 2015 is the Act later in time and therefore when the Act, 2015 has been enacted, more particularly Sections 3 & 10, there was already a provision contained in Section 2(1)(e) of the Act, 1996.

The Hon’ble Supreme Court also observed that as per settled position of law, it is to be presumed that while enacting the subsequent law, the legislature is conscious of the provisions of the Act prior in time and therefore the later Act shall prevail. It was also noted by the Hon’ble Court that even as per Section 15 of the Act, 2015, all suits and applications including applications under the Act, 1996, relating to a commercial dispute of a specified value shall have to be transferred to the Commercial Court. Even as per Section 21 of the Act, 2015, shall have overriding effect. It provides that save as otherwise provided, the provisions of this Act shall have effect, notwithstanding anything inconsistent therewith contained in any other law for the time being in force.

Thus, based on the aforesaid reasoning, the Apex Court dismissed all the Appeals.