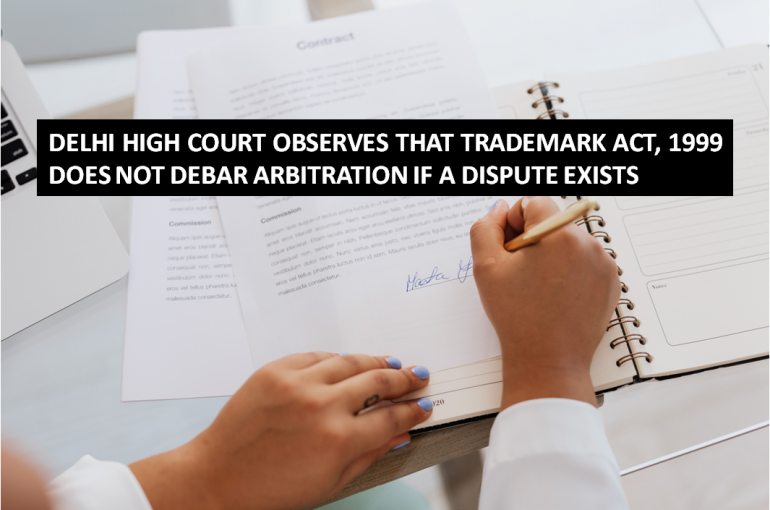 DELHI HIGH COURT OBSERVES THAT TRADEMARK ACT, 1999 DOES NOT DEBAR ARBITRATION IF A DISPUTE EXISTS

A Single Judge Bench of the Delhi High Court presided by Justice Navin Chawla passed a Judgment dated 10.01.2023 in M/S Liberty Footwear Company Versus M/S Liberty International in CS(COMM) 715/2019 and observed that rights in personam are amenable to arbitration and disputes in rem are required to be adjudicated by the Courts and Public Tribunals.

The Plaintiff, M/S Liberty Footwear Company is a partnership firm and is also the proprietor of the registered trade mark ‘LIBERTY’, amongst several other trademarks. Mr. Dheeraj Gupta, the Sole Proprietor of the Defendant, M/S Liberty International, is a partner of the Plaintiff firm, however, he does not have any personal rights in the  registered trade mark ‘LIBERTY’ in any manner whatsoever. The Plaintiff had granted an exclusive license vide an Exclusive License Agreement dated 31.03.2003 in favour of ‘M/s Liberty Shoes Limited’  where Mr. Dheeraj Gupta is also a shareholder and therefore is an exclusive licensee for the use of the said mark and its many variants.

A suit was filed before the Delhi High Court by the Plaintiff alleging that the Defendant was unauthorizedly using the Plaintiff’s trade mark ‘LIBERTY’. Thereafter, the Defendant moved an application praying that as the dispute raised by the Plaintiff is one inter se amongst the partners of the Firm and arising out of the Partnership Deed dated 08.09.2003, the parties should be referred to arbitration in terms of Clause 14 (Arbitration Clause) of the Partnership Deed.

The Hon’ble Delhi High Court while relying on a Supreme Court decision in the case of Vidya Drolia and Others vs. Durga Trading Corporation, (2021) 2 SCC 1, came to a conclusion that the Supreme Court held that a distinction is to be drawn between an action in personam, that is, actions which determine the rights and interests of the parties themselves in the subject-matter of the case, and actions in rem, which refer to actions determining the title to the property and the rights of the parties, not merely among themselves but also against all persons at any time claiming an interest in that property. While rights in personam are amenable to arbitration, disputes in rem are required to be adjudicated by the Courts and Public Tribunals, therefore, being unsuitable for private arbitration. However, disputes relating to subordinate rights in personam arising from rights in rem are considered to be arbitrable. The Supreme Court, in fact, gives an example stating that rights under a patent license may be arbitrated, but the validity of the underline patent may not be arbitrable; similarly, a claim for infringement of copyright against a particular person is arbitrable, though in some manner the arbitrator would examine the right to copyright, a right in rem.

The Hon’ble Delhi High Court further observed that the present Suit does not relate to an issue of ‘grant or issue of or registration of trade mark’ rather the present suit is for enforcement of such a right, not against a third party which is a total stranger to the registered proprietor of the trademark, but someone who claims (whether rightly or wrongly) a right to use the trademark under or through the registered proprietor of the trademark. In fact, the Defendant does not even dispute the Plaintiff to be the proprietor of the marks in question. Therefore, based on the observations of the Supreme Court, which has stated that where the claim in the Suit is the enforceability of rights in personam, flowing out of a right in rem, by virtue of the Plaintiff being the proprietor of the said marks, the parties are to be referred to arbitration.

The Hon’ble Delhi High Court also observed that in the present case, Section 134 (Suit for infringement, etc., to be instituted before District Court) of the Trade Marks Act, 1999 does not totally exclude the jurisdiction of the Civil Courts to entertain and adjudicate upon a claim of the infringement of a trade mark. It merely provides that such claim cannot be adjudicated upon by a Court inferior to the Court of a District Judge. As held by the Supreme Court in Vidya Drolia and Others (supra), merely specifying which Civil Court is to adjudicate such disputes may not be enough to accept the inference of implicit non-arbitrability of such disputes. Further, the Court held that the doctrine of election of remedies is applicable only where there are two or more remedies available to the litigants at the time of election which are repugnant and inconsistent. In the present case, there is no inconsistency or repugnancy shown to exist between the rights of the Plaintiff under the Trade Marks Act and the Partnership Act. The Plaintiff cannot breach the arbitration agreement merely by framing the Suit as one under the Trade Marks Act. Applying the above principles to the facts of the present case, the application filed by the Defendant under Section 8 of the Arbitration Act was allowed and the disputes between the parties was observed to be flown from the Partnership Deed dated 08.09.2003.

Thus, based on the aforesaid reasons, the Delhi High Court allowed the Application filed by the Defendant under Section 8 of the Arbitration Act and the parties were referred to Arbitration in accordance with Clause 14 of the Partnership Deed dated 08.09.2003.