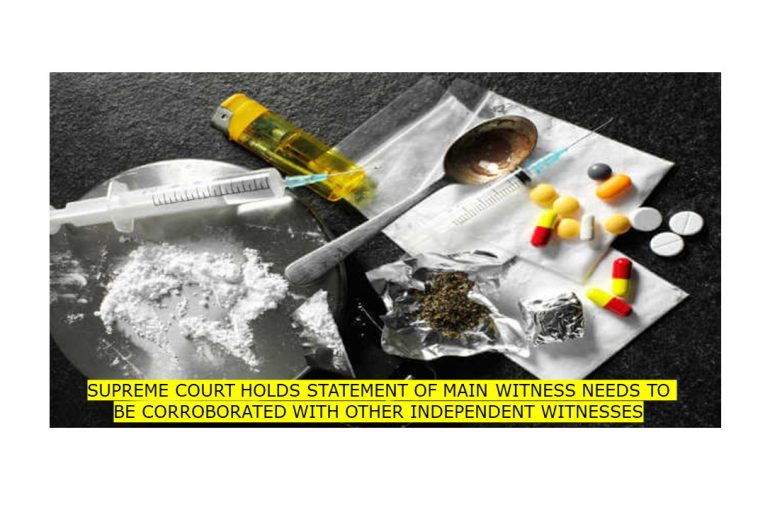 In a recent Criminal Appeal, a two Judge Bench of the Supreme Court comprising of Justice Indira Banerjee and Justice V. Ramasubramanian passed a Judgement dated 30.08.2022 in ‘Sanjeet Kumar Singh@Munna Kumar Singh v. State of Chhattisgarh, Criminal Appeal No 871 of 2021’ and set aside the Judgement dated 01.10.2019 (Impugned Order) passed by the High Court of Chhattisgarh and held that the statement of main witness needs to be corroborated by the statement of other independent witnesses under the Narcotic Drugs and Psychotropic Substances Act, 1985.

In this case, the Station House Officer (SHO for short) of Chakarbhata Police Station received a secret information that the Appellant and his friend, one, Reena Das, were carrying ganja in a car and were travelling from Raipur to Pendra Road. The SHO recorded this information in Rojnamcha Sanha, prepared Mukhbir Suchana, forwarded the said information to the higher officer and then proceeded to the spot and stopped the car. A notice was served under Section 50 (Conditions under which search of persons shall be conducted) of the Narcotic Drugs and Psychotropic Substances Act, 1985 (the Act), and then subsequently a search was conducted. Some 47.370 Kgs. of ganja kept in three bags were found in the car. The SHO collected samples from each of the three bags, sent them to Forensic Science Laboratory (FSL) and after receipt of the Report, filed a chargesheet against the Appellant as well as his friend Reena Das for an offence punishable under Section 20(b) of the Act. Section 20(b) of the Act states that if anyone produces, manufactures, possesses, sells, purchases, transports, imports inter-State, exports inter-State or uses cannabis and the quantity involved is lesser than commercial quantity but greater than small quantity then that person shall be punished with rigorous imprisonment for a term which may extend to ten years, and with fine which may extend to one lakh rupees.

The Special Court established under the Act, based on the chargesheet convicted the Appellant for the offence under Section 20(b) of the Act, and imposed a sentence of rigorous imprisonment of 10 years vide Order dated 10.05.2017. However, Reena Das was acquitted by the Special Court. The State did not file appeal against the acquittal of Reena Das.

The Apex Court after considering the contentions made by both the parties, observed that, “The Special Court, for coming to the conclusion that the appellant was guilty of the offence, relied extensively upon the testimony of Mr. N.L. Dhritlahre, Deputy Superintendent of Police, who acted both as the informant and as the Investigating Officer (‘I.O.’ for short) and who was examined as PW7. The Special Court found that PW7 had followed the procedure prescribed in Sections 43 and 49 of the Act and that his testimony remained unshaken.”

The Appellant contended that the Special Court has completely disregard the lack of corroboration of the testimony of police witnesses by independent witnesses. The Supreme Court, further considered the statements made by PW7 and statements by other witnesses and observed that, “Therefore, if the story advanced by PW7 is to be believed, (i) he received the information at about 16:50 hrs.; (ii) he completed the formalities and sent notices to the independent witnesses at 17:10 hrs.; (iii) he left the Police Station at 17:10 hrs., and reached the place of incident in 57 minutes; and (iv) his team waited at the place of incident for 40 minutes for the accused to arrive. But in the above timeline, PW7 is completely silent about the time when the witnesses reached the Police Station or the place of incident.”

The Apex Court then checked various evidences and chargesheet for the timeline and held the I.O. examined as PW7 claims to have done everything only in the presence of independent witnesses. But those independent witnesses denied their presence and participation. The Supreme Court thus raised serious doubts on the search and seizure made by PW7. It was further held that Section 54 of the Act raises a presumption and the burden shifts on the accused to explain as to how he came into possession of the contraband. But to raise the presumption under Section 54 of the Act, it must first be established that a recovery was made from the accused and in the present case the recovery made from the Appellant was not established.

The Apex Court held that the Appellant was entitled to the benefit of doubt. Therefore, the Supreme Court set aside the Order of the High Court dated 01.10.2019 and acquitted the Appellant.