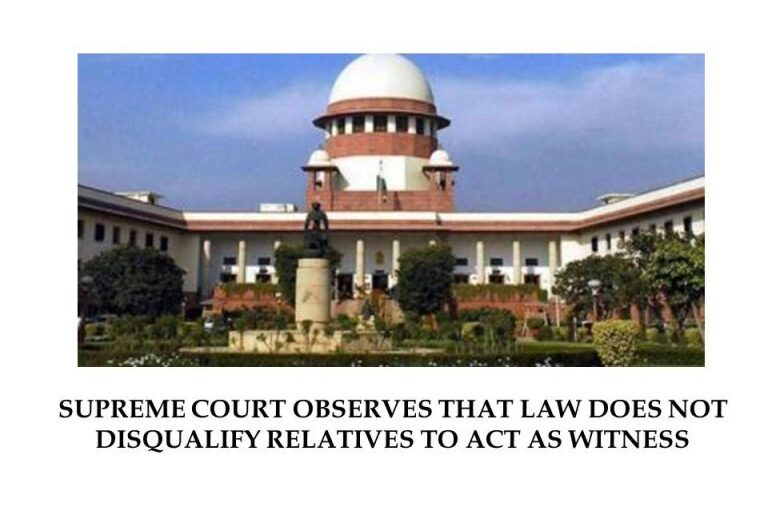 Recently, a Division Bench of the Hon’ble #SupremeCourt of India in the case of Gumansinh alias Lalo alias Raju Bhikhabhai Chauhan and Another vs. State of Gujarat [(2021) SCC OnLine SC 660], vide its #Judgment dated 03-09-2021 observed that the #evidentiary value of the close relatives/family members is not liable to be rejected on the ground of being a #relative of the Deceased. As such, law does not disqualify relatives to be produced as a witness though they may be interested #witness.

The Deceased committed suicide on 14.12.1997 by consuming poison at her matrimonial home for the sole reason that the Deceased was unable to bear the continuous mental and physical cruelty meted out to her by the Appellants in a period of 8 months of marriage.

The father of the Deceased filed a Police Complaint, which got registered as ICR No. 34/1997 for the offences punishable under Section 498A (Husband or relative of husband of a woman subjecting her to cruelty) and Section 306 (Abetment of suicide) read with Section 114 (Abettor present when offence is committed) of the Indian Penal Code, 1860 (IPC). Charge-sheet was filed by the Police and the case went before the Learned Additional Sessions Judge for trial. Thereafter, the Appellants pleaded not guilty. During the trial, the prosecution side had examined seven witnesses, all of whom gave incriminating evidence against the Appellants in their statement under Section 313 of Code of Criminal Procedure Code, 1973 (Cr.PC). The Appellants however totally denied the case of the prosecution.

As a result, the Learned Sessions Judge, Vadodara (Trial Court) convicted the Appellants under Sections 306, 498A read with Section 114 of the IPC, vide its Judgment dated 27.07.2000.

The Appellants filed an Appeal against the Trial Court Judgment dated 27.07.2000 before the Hon’ble High Court of Gujarat at Ahmedabad (High Court). The High Court observed that the evidence produced by the prosecution clearly indicates the Deceased was subjected to mental and physical cruelty by the Appellants on the account of non-fulfillment of demand of Rs. 25,000/- and, therefore, the Judgment and Order of conviction passed by the Trial Court was confirmed. The High Court vide its Order dated 28.12.2018 convicted the Appellants under Section 498-A and Section 306 of the IPC.

Being aggrieved, the Appellant filed an Appeal before the Supreme Court against the final Order and Judgment dated 28.12.2018 passed by the Hon’ble High Court. It was contended by the Sate that all the ingredients necessary for conviction under Section 306 of the IPC stands proved with the aid of Section 113-A of the Evidence Act, 1872 as such the present Appeal deserves to be dismissed.

The Supreme Court perused the impugned Judgment as also the testimony of the witnesses and while dismissing the Appeal, it observed and held as follows:

1) That the suicidal death of the deceased occurred within a short span of eight months of marriage. Section 113-A of the Evidence Act, provides for presumption as to abetment of suicide by her husband or any of his relative if the married woman dies within seven years of marriage.

2) The evidentiary value of the close relatives/interested witness is not liable to be rejected on the ground of being a relative of the deceased. Law does not disqualify the relatives to be produced as a witness though they may be interested witnesses. If the evidence of any interested witness/relative on a careful scrutiny by the Court, is found to be consistent and trust-worthy, free from infirmities or any embellishment that inspires the confidence of the Court, there is no reason not to place reliance on the same.

3) The family members as witnesses are related to the Deceased and are natural witnesses. There is no bar in examining the family members or any other person as witnesses. Their evidence is not liable to be discarded on the ground that they are close relatives/interested witness. From a perusal of the evidence of the aforesaid witnesses, the Supreme Court found that it is consistent without any material contradiction and inspires confidence. The Courts below have also properly scrutinized their evidence prior to taking them into account and there is nothing unusual in believing their testimonies.

4) The Court held that the prosecution has successfully established the charge of cruelty as laid down in Explanation (b) of Section 498-A of the IPC and also the fact that the Deceased committed suicide by consuming pesticide within seven years of marriage.

5) It further referred to the language under Section 306 of the IPC (Abetment of Suicide) and observed that to attract the applicability of Section 113-A of the Evidence Act (Presumption as to Dowry Death), three conditions are required to be fulfilled:—

i) The woman has committed suicide,

ii) Such suicide has been committed within a period of seven years from the date of her marriage,

iii) The charged-accused had subjected her to cruelty.

6) There is no doubt that the existence and availability of the above said three circumstances are fulfilled in the instant case. There is no dispute about the facts that the Deceased committed suicide within a period of seven years from the date of her marriage and charged-Appellants have subjected her to cruelty.

7) The defence failed to adduce any evidence to rebut the presumption under Section 113-A of the Evidence Act and on the other hand the prosecution was successful in establishing the evidence that the Deceased was left with no choice than to commit suicide.

In view of the above, the Supreme Court held that it found no fault and irregularity in the decision of the Trial Court and the High Court by placing reliance on the evidence in drawing the presumption under Section 113-A of the Evidence Act particularly, when there was no direct evidence brought on record by the defence to establish that Accused did not abet the commission of suicide by his Wife. Thus, the Supreme Court refused to interfere with the decision of the Trial Court as confirmed by the High Court.