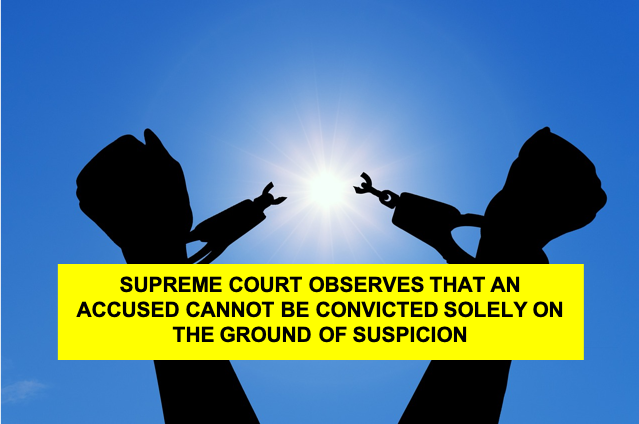 A Two Judge Bench of the Hon’ble Supreme Court of India comprising of Justice Ajay Rastogi and Justice C.T. Ravikumar in the matter of Vikramjit Kakati vs. The State of Assam Criminal Appeal No. 1140 of 2022 Arising out of SLP (Crl.) No(s). 1211 of 2022 passed a Judgment dated 04-08-2022 and while allowing the Appeal held that there is no iota of evidence which connects the Appellant with the commission of the crime.

On 28-04-2009, Lt. Qureshi Sahidul Islam’s (Deceased) Mother, Smt. Rajia Islam, filed an FIR at the Police Station stating that her Son was burnt to death by his wife and her accomplice, Vikramjit Kakati- Appellant, inside his rented house under suspicious circumstances. Her Son succumbed to the injuries sustained by him while on the way to the hospital. An FIR was registered at the Police Station bearing Case No. 198/2009 under Section 302 of the Indian Penal Code (IPC) (Punishment for murder). Along with a list of thirteen witnesses, the Police filed a Charge Sheet under Sections 302 IPC (Punishment for murder) / 120B IPC (Punishment of criminal conspiracy) / 201 IPC (Causing disappearance of evidence of offence, or giving false information, to screen offender) / 118 IPC (Concealing design to commit offence punishable with death or imprisonment for life) against three persons namely Smt. Zahida Imdad Islam (Wife of the Deceased), Smt. Jahanara Imdad Islam (Mother of Zahida Imdad Islam) and the present Appellant before the Additional Sessions Judge (Fast Track Court), Sivasagar, in Sessions Case No.57(S­S) of 2012 (Trial Court). The only allegation brought against the current Appellant was that he conspired with other Accused to remove the evidence from the crime scene.

Initially, the Trial Court by Order dated 17-07-2012 framed charges against the Appellant and other Accused under Sections 302 and 120-B IPC (Punishment of criminal conspiracy) and under Section 201 IPC (Causing disappearance of evidence of offence, or giving false information to screen offender). The Appellant preferred revision against the charges framed against him before the High Court of Gauhati. The High Court by an Impugned Order dated 03-12-2021 dismissed the revision filed by the Appellant. Hence the present Appeal has been filed before the Supreme Court.