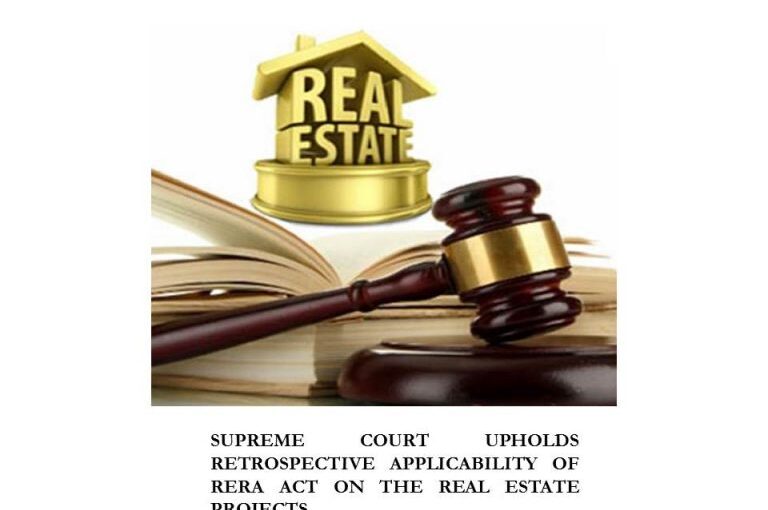 A Three Judge Bench of the Hon’ble #SupremeCourt of India comprising of Justices Uday Umesh Lalit, Ajay Rastogi and Aniruddha Bose vide Judgment dated 11-11-2021 in the case of M/s Newtech Promoters And Developers Pvt Ltd. v. State of UP & Ors. Etc. {Civil Appeal No.(s) 6745-6749 Of 2021 {Arising out of SLP (Civil) No(s). 3711-3715 Of 2021} has decided the matter on several important issues pertaining to The #RealEstate (Regulation and Development) Act, 2016 (Act). One of the issues is that the Act has a retrospective effect on the Real Estate #Projects which were on going at the time of commencement of the Act.

In the present case, the Allottees/Home Buyers (Respondents) had invested in the Real Estate Project being developed by the Promoter/Real Estate Developer (Appellants). However, there was a substantial delay on part of the Appellant in delivering the possession of the Unit/Plot/Building as per the terms and conditions laid down in the Home Buyer’s Agreement. Consequently, Complaints were filed by the Home Buyers for refund of the investment made along with interest under Section 31 of the Act.

A Single Member of the Uttar Pradesh Real Estate Regulatory Authority (Authority) passed a direction to refund the principal amount along with interest (MCLR + 1%) as prescribed by the State Government under the Act. Thereafter the Appellants filed Writ Petition under Articles 226 and 227 of the Constitution in the High Court of Allahabad (High Court) thereby questioning the Order passed by the Authority by arguing that it has been passed by a Single Member of the Authority and holds no jurisdiction to pass such Orders of refund of the amount as contemplated under Section 18 of the Act. The High Court dismissed the Writ Petition. Aggrieved, the Appellants preferred Appeals in the Hon’ble Supreme Court of India.

In Appeal, one of the key issues that arose before the Apex Court was whether the Act is retrospective in its operation and what will be its legal consequence if tested on the anvil of the Constitution of India.

After taking into consideration, the facts of the case and the arguments advanced by the Parties and taking note of various statutory provisions of the Act especially Section 3(1) of the Act, the Bench made an observation that all “on going projects” that commence prior to the Act and in respect to which completion certificate has not been issued are covered under the Act.

For reference Section 3(1) of the Act is reproduced as follows:

The Apex Court in this regard held as follows:

“It manifests that the legislative intent is to make the Act applicable not only to the projects which were yet to commence after the Act became operational but also to bring under its fold the on going projects and to protect from its inception the inter se rights of the stake holders, including allottees/home buyers, promoters and real estate agents while imposing certain duties and responsibilities on each of them and to regulate, administer and supervise the unregulated real estate sector within the fold of the real estate authority.”

“52. The Parliament intended to bring within the fold of the statute the ongoing real estate projects in its wide amplitude used the term “converting and existing building or a part thereof into apartments” including every kind of developmental activity either existing or upcoming in future under Section 3(1) of the Act, the intention of the legislature by necessary implication and without any ambiguity is to include those projects which were on going and in cases where completion certificate has not been issued within fold of the Act.”

The Supreme Court while disposing off the Appeals held that there is no error in the Judgment passed by the High Court. The Court further held that if any of the Appellants intend to prefer an Appeal before the Appellate Tribunal against the Order of the Authority, the same can be challenged within 30 days from the date of the Judgment provided the Appellants comply with the provision of making the pre deposit as provided under proviso to Section 43(5) of the Act, that the Tribunal may decide on its own merits in accordance with law.

The acceptance of the Apex Court that the Act is applicable not only to the projects which were yet to commence after the Act but also on going projects has brought under its fold several on going projects. This will certainly give protection to hapless home buyers who have invested in on going projects prior to the enforcement of the Act.