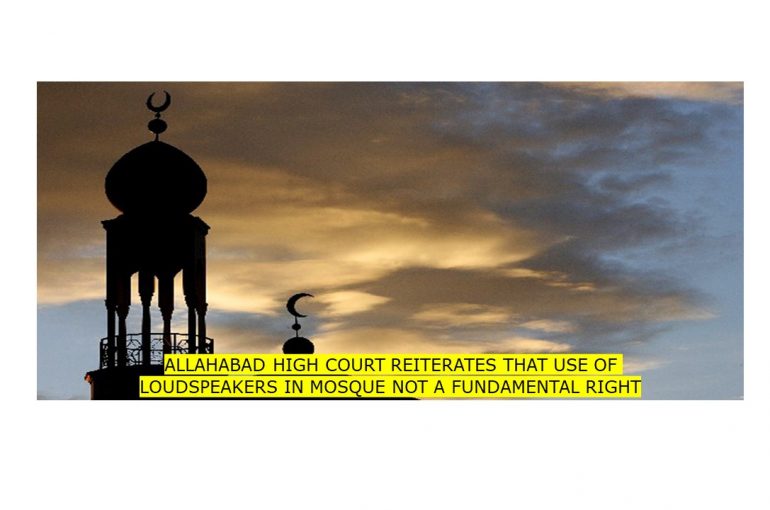 The Hon’ble Allahabad High Court has once again decided the issue of the use of loudspeakers in mosque for Azaan. A two-Judge Bench of the Allahabad High Court, comprising of Justice Vivek Kumar Birla and Justice Vikas Budhwar, on 04.05.2022, while deciding the case of Irfan v. State of U.P. and others, Writ (Civil) No. 12350 of 2022, reiterated that recitation of Azaan on loudspeakers is not an integral part of Islam.

The High Court of Allahabad observed that although Azaan is an integral part of Islam, delivering it through loudspeakers is not a part of the religion. The Court also observed that “the law has now been settled that the use of loudspeakers from mosques is not a fundamental right. Even otherwise, a cogent reason has been assigned in the impugned Order. Accordingly, we find that the present petition is patently misconceived, hence the same is dismissed.” Thus, the High Court, accordingly dismissed the Writ Petition.

In several instances this particular issue has come up before the Courts in India. In Moulana Mufti Syed Mohammed Noorur Rehman Barkati v. State of W.B., 1998 SCC OnLine Cal 73, it was held that use of microphone and loud­speakers were not an essential or an integral part of Azan. Similarly, there is a catena of judgements in which recognizes right to live in freedom from noise pollution as a fundamental right under Article 21 of the Indian Constitution.

In Church of God (Full Gospel) in India v. K.K.R. Majestic, (2000) 7 SCC 282, it was held that “No religion prescribes that prayers should be performed by disturbing the peace of others nor does it preach that they should be through voice amplifiers or beating of drums.”

In Afzal Ansari v. State of U.P., 2020 SCC OnLine All 592, the Supreme Court held that “Azan may be an essential and integral part of Islam but recitation of Azan through loud­speakers or other sound amplifying devices cannot be said to be an integral part of the religion warranting protection of the fundamental right enshrined under Article 25 of the Constitution of India, which is even otherwise subject to public order, morality or health and to other provisions of part III of the Constitution of India. Until and unless there is a license/permission from the authorities concerned under the Noise Pollution Rules, under no circumstances, Azaan can be recited through any sound amplifying devices.”

Thus, use of loudspeakers for Azaan is therefore not permissible and not a fundamental right covered under right to practice religion as enshrined in the Constitution.