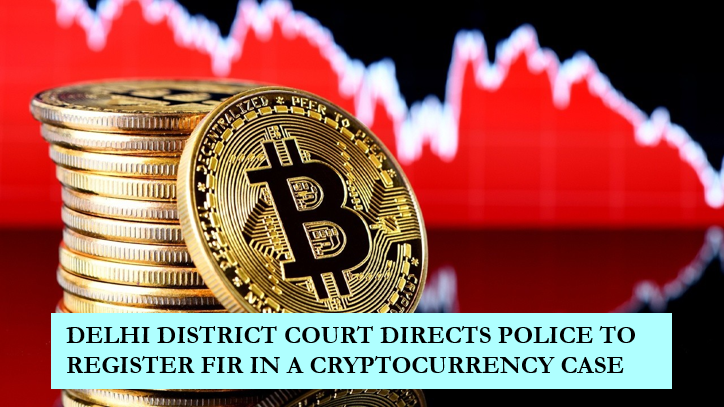 Recently, the Hon’ble Chief Metropolitan Magistrate, West, Tis Hazari Court, Delhi (#Magistrate Court) in the case of Hitesh Bhatia vs. Mr. Kumar Vivekanand [Case No. 3207/2020], vide its Order dated 01-07-2021 directed the #Police Authority to lodge an FIR and investigate whether an online exchange portal is involved or is negligent in respect of the suspicious activities carried out through its portal.

This case involves, one, Mr. Hitesh Bhatia (the “Complainant”), who deals in sale and purchase of Bitcoins. On multiple occasions, one, Mr. Kumar Vivekanand (the “Accused”) purchased #Bitcoins from the Complainant using a virtual wallet/address on an online portal named “Binance”.

Thereafter, the Complainant filed a Complaint under Section 200 Criminal Procedure Code, 1973 (Cr.P.C) along with an Application under Section 156 (3) of the Cr.P.C, before the Magistrate Court. The Complainant sought the intervention of the Magistrate Court for directions to police to conduct a thorough investigation in the matter and direct them to register a criminal case against the Accused.

The Magistrate Court observed with respect to the maintainability of a Complaint that the Magistrate has the jurisdiction in view of the provisions of Section 179, 180 and 182 of Cr.P.C.

The Magistrate Court also formulated the issue to decide whether the Complainant himself was carrying out a lawful activity and whether he himself has come to the Court with clean hands.

The Magistrate Court upon a consideration of the Complaint under Section 200 Cr.P.C along with the Application under Section 156(3) Cr.P.C. and the other material on record, observed as follows:

1) That the Reserve Bank of India (‘RBI’) had issued a Circular dated 06.04.2018 and directed the banks, other financial institutions and cautioned the users, holders, traders of virtual currencies to not deal in virtual currencies or provide services such as maintaining accounts, registering, trading, settling, clearing, giving loans and accepting virtual currencies as collaterals, opening accounts of exchanges dealing with them etc.

2) However, the said Circular dated 06.04.2018 was set aside by the Hon’ble Supreme Court in the case of Internet and Mobile Association vs. Union of India vide Judgment dated 04.03.2020. The Supreme Court observed that access to banking is the equivalent of supply of oxygen in any modern economy, and the total denial of such access to the persons who carry on a trade that is not prohibited by law cannot be said to be a reasonable restriction, and is extremely disproportionate. Therefore, the RBI circular dated 06.04.2018 has been set aside only upon the ground of unreasonableness of restrictions imported upon the exercise of freedom guaranteed under Article 19 (i)(g) of the Constitution of India.

3) On 31.05.2021, the RBI issued another Circular titled as ‘Customer Due diligence for transactions in virtual currencies’. The said Circular advised the banks and financial institutions not to rely upon the Circular dated 06.04.2018. It has further directed all entities regulated by the RBI to carry out customer due diligence process in line with regulations governing standards for policies such as ‘Know Your Customer’ (‘KYC’), ‘Anti-Money Laundering’ (‘AML’) and ‘Combating the Financing of Terrorism’ (‘CFT’). The transactions in virtual currencies must also carry out the obligations under the Prevention of Money Laundering Act, 2002 (‘PMLA’) in addition to ensuring compliance with relevant provisions under the Foreign Exchange Management Act, 1999 (‘FEMA’) for overseas remittances.

4) Hence, the Magistrate Court held that the transactions in #cryptocurrency still have to comply with the general law in force in India and the RBI regulations regarding KYC, AML and CFT. It is the responsibility of an intermediary i.e., Binance to ensure adequate safeguards against activities such as ‘mixing’ and other random cryptocurrency exchanges, which change the identity of Bitcoins being held in a virtual wallet. The traceability of Bitcoin transactions may even be managed through the Blockchain Analysis, but establishing their connection with the malicious actors is a complex issue, in case the intermediary is not adhering to the KYC norms.

5) Any opportunistic activity in absence of any legal regulation, with utter disregard to the identity of parties, sources, destination of funds, and illegal purposes for which it may be used, still do not enjoy any route for legal and regulatory escape.

In view of the above, the Magistrate Court finally held that the aforementioned suspicious aspects of the transaction have to be investigated in detail. It is significant to investigate if there is any negligence or complicity on the part of the online portal Binance, to hide the proceeds of crime or to fund any illegal activities through cryptocurrency, etc. Therefore, the Magistrate Court disposed of the said Application with specific directions to Moti Nagar Police Station to investigate and register the Complaint under the relevant provisions of the Indian Penal Code, 1860, PMLA and FEMA. The Court also highlighted that the registration of FIR does not mean that the Accused is to be automatically arrested.