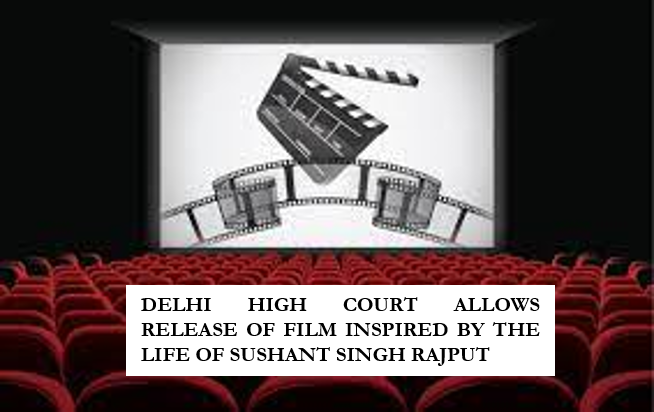 The Single Judge Bench of the Delhi High Court comprising of J. Sanjeev Narula has in a recent case of Krishna Kishore Singh vs Sarla A. Saraogi and Others passed a Judgment dated 10-06-2021 and refused to pass pre-emptory injunction against the release of a film, ‘Nyay: The Justice’ (Film), inspired by certain events in the life of Late Actor Sh. Sushant Singh Rajput (SSR).

In this case, the Plaintiff, SSR’s father, had filed an Interim Application I.A. 5697/2021 in CS(COMM) 187/2021 under Order 39 Rule 1 of the Code of Civil Procedure 1908 (CPC) read with Section 151 CPC and sought for ad-interim ex-parte injunction against the Defendants from using his son’s name, caricature, lifestyle or likeness in forthcoming films and other ventures, on the ground that such use, publication, production, or depiction, without the prior approval of SSR’s legal heirs, would infringe the personality rights, right to privacy including right to publicity, and right of fair trial under Article 21 of the Constitution of India 1950. The Plaintiff further claims that the Defendants by releasing a Film based on events of SSR’s life, are trying to exploit the public curiosity that is surrounding SSR’s life and suspicious death, for their own commercial gain and that it may also adversely affect the Central Bureau of Investigation (CBI) investigation of SSR’s suspicious death.

However, the Defendants have argued that the Film is inspired from true events surrounding the lives of various celebrities including SSR and the details of such events are widely available in public domain. The said Film is not a biopic of SSR and will not portray the name, image, caricature, photographs etc., of SSR or his family. The Film is in fact a fictional rendition with creative dramatization of such true events.

1) That the Plaintiff has sought for injunction/restraining orders against the release, publication, exhibition, etc of the said Film and all forthcoming films that is yet to be released for public viewing as it would otherwise violate their right to privacy and personality/celebrity rights, etc. It is reiterated that such pre-publication injunctions are granted only in exceptional circumstances.

3) That the Plaintiff has claimed an exclusive right/copyright over the life story of SSR. But as per the Copyright Act 1957, historical or biographical facts/news cannot be copyrighted because such news is already part of public domain and does not involve any originality and creation, which is required for copyright protection. Hence, it is reiterated that any person can make movies on facts and events that have already occurred.

4) Moreover, the Defendants have claimed that the Film is inspired from various facts, events and/or information that are already available in public domain. It is reiterated that information that is available in public domain, becomes a matter of public record and once it becomes a matter of public record, the right to privacy no longer subsists. Hence, the Plaintiff cannot claim violation of right to privacy in this case.

5) That further, the Defendants in this case are not making any misrepresentation or using the name, caricature, lifestyle, and/or likeness of SSR or applying the same on any merchandise so as to falsely endorse that the Film is a biopic of SSR. Hence, as the Film is proved to be fictional in nature and not a biopic/documentary or a film based on true events, thus, there is no infringement of celebrity rights.

6) Moreover, if a disclaimer is added in the beginning of the Film, then all the apprehensions of the Plaintiff that the Film is passing off as a biopic of SSR, will be put to an end.

7) That further the Plaintiff has claimed that the release of the Film would have an adverse impact on the fair and free trial of SSR case. However, it is pertinent to note that investigative agencies and judicial system do not rely on cinematographic films for the purpose of investigation or judicial pronouncements.