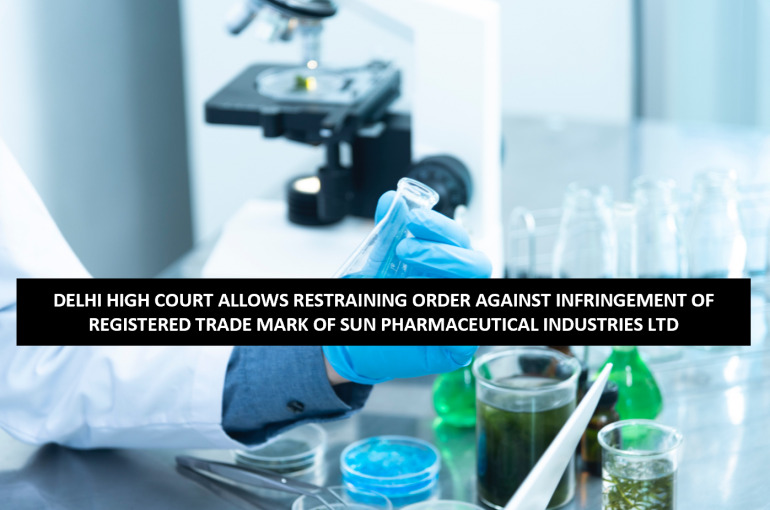 In this case, the Plaintiff, Sun Pharma filed a Suit against the Defendant, DWD Pharma contending that the Plaintiff’s predecessor-in-interest, namely, Ranbaxy Laboratories Ltd. had coined and adopted a Trade Mark ‘FORZEST’ in 2003 and has been using it since then. The same has also been registered with the Trade Mark Registry on 04-02-2003 under Class 5 of the Fourth Schedule to Trade Mark Rules 2002 for “pharmaceutical and medicinal preparations for human and veterinary use” that was initially recorded in the name of Ranbaxy Laboratories Ltd and later, in the name of the Plaintiff.

Thereafter, the Defendant’s Trade Mark ‘FOLZEST’ was advertised on 31-01-2022 and is pending consideration before the Trade Mark Registry.

The Plaintiff, Sun Pharma, thus, filed an I.A. No. 7825 of 2022 in the aforesaid case seeking ad-interim injunction restraining the Defendant, DWD Pharma from manufacturing, selling, advertising, or dealing in medicinal preparations under the Trade Mark ‘FOLZEST’, as it was deceptively similar to the Plaintiff’s Trade Mark ‘FORZEST’ and the said interim relief was allowed by the High Court vide ex-parte Order dated 19-05-2022.

The Defendant filed an I.A. No. 9523 of 2022 under Order 39 Rule 4 of the Code of Civil Procedure 1908 (CPC) (Order for injunction may be discharged, varied or set aside) read with Section 151 CPC (Saving of inherent powers of Court) seeking setting aside of the aforesaid ad-interim Injunction Order dated 19-05-2022.

The High Court vide Judgment dated 22-11-2022 made the following observations in this case:

2) That the Plaintiff has also not provided in its Plaint and A. No. 7825 of 2022, the details and responses filed by its predecessor-in-interest in the Trade Mark Application and Examination Report concerning registration of Plaintiff’s Trade Mark ‘FORZEST’.

3) That the Plaintiff’s Trade Mark ‘FORZEST’ is descriptive in nature, being a combination of words ‘FOR’ and ‘ZEST’ which literally means ‘feeling of enjoyment, excitement and enthusiasm’. Hence, as the said word ‘ZEST’ is a publici juris expression, no person can claim exclusivity of use of the word ‘ZEST’.

i) In case of medicinal goods, even a remote chance of deception or confusion amongst customers / patients / users is to be avoided, as otherwise, it may be fatal to their lives.

ii) Thus, despite concealment of material facts by the Plaintiff, it would be entitled to ad-interim injunction if the Plaintiff’s and the Defendant’s Trade Marks are deceptively similar to each other.

iv) Although the Defendant has shown it has used the word ‘ZEST’ in its other registered trade marks and some pending trade mark applications concerning various medicinal goods, the Defendant would still have to prove exclusivity over the Mark ‘ZEST’ in all its variants in order to succeed in its defense.

v) In the present case, the Plaintiff has proved that it has been using the Trade Mark since 2003 and has made substantial sales of the medicinal goods and thereby, has established a goodwill in the said Mark ‘FORZEST’. However, the Defendant’s medicinal goods have not yet been launched under the Trade Mark ‘FOLZEST’.

vi) Thus, even though the Defendant may have started marketing its goods under the Trade Mark ‘FOLZEST’ in 2021, the Defendant would still be considered as a subsequent user and adopter of the said Mark. Hence, the Court held that a right of a prior user of the Mark, which in the present case is the Plaintiff and its Mark ‘FORZEST’, would always prevail.

Therefore, based on the aforesaid observations, the High Court held that (a) the Plaintiff has been selling the medicinal goods under the Trade Mark ‘FORZEST’ since 2003, i.e. much earlier to the Application for Registration of Defendants’ Trade Mark and (b) the medicines sold by the respective Trade Marks / Trade Names by the Plaintiff and the Defendant are deceptively similar to each other and any confusion in the same can lead to disastrous consequences, hence, the High Court confirmed its Ad-Interim Injunction Order dated 19-05-2022 and dismissed the Defendant’s I.A. No. 9523 of 2022. Further, the High Court imposed Rs. 10 Lakhs costs on the Plaintiff for mala fide concealment of material facts in the Plaint and the I.A. No. 7825 of 2022.

In the pharma world, copying parts of the name of a successful drug is very common. Sometimes, the new drug can have a deceptively similar name to the existing drug. If both the drugs have common use, it is obvious that there will be confusion in the mind of the buyer. Though in the present case, the drugs were used for different purposes, the Court was inclined to grant injunction to Sun Pharma as they were showing prior use since 2003. The Court however observed that since the word ‘FORZEST’ was descriptive in nature, no one could claim exclusivity on the use of the word ‘ZEST’.