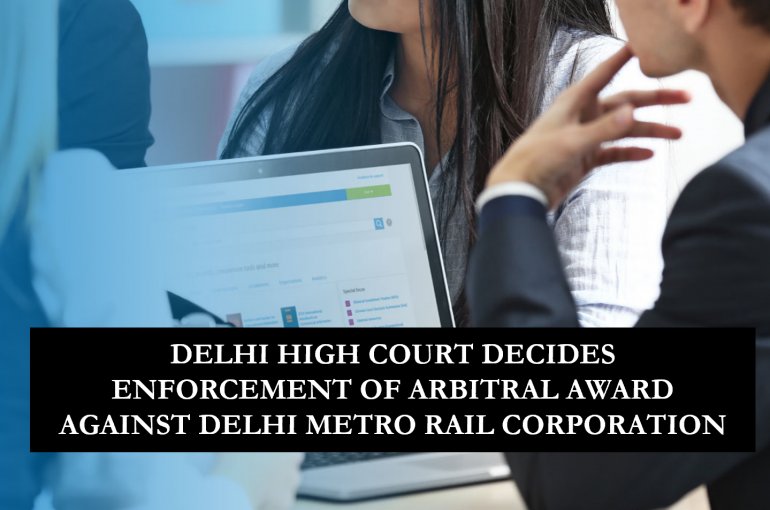 Aggrieved, DMRC filed a Petition under Section 34 of the Arbitration and Conciliation Act 1996 (Act) (Application for setting aside arbitral awards) before the Delhi High Court, thereby challenging the Arbitral Award. However, the said Section 34 Petition was dismissed by a Single Judge of the High Court, vide Judgment dated 06-03-2018. Aggrieved, DMRC filed an Appeal before the Division Bench of the High Court against the Judgment dated 06-03-2018 passed by the Single Judge, which was partly allowed vide Judgment dated 15-01-2019 and as a result, the Arbitral Award was set aside.

Hence, the Decree Holder filed for execution of the Arbitral Award before the Delhi High Court under Section 36 of the Act (Enforcement) and sought for directions to DMRC to pay them the following Decretal amount:

b) Interest on termination payment amount for the delayed period i.e. up to date of the Award 11-05-2017 at the rate of SBI Prime Lending Rate + 2% interest and

Whereas, DMRC contended that an arbitral tribunal has the discretion to allow or not allow for interest under Section 31 (7) of the Act and in this case, the Tribunal exercised its discretion and did not provide for interest for delayed period / till the date of Award. Thus, DMRC contended that they are not liable to pay interest. Section 31 (7) of the Act is reproduced below for easy reference:

(b) A sum directed to be paid by an arbitral award shall, unless the award otherwise directs, carry interest at the rate of two per cent. higher than the current rate of interest prevalent on the date of award, from the date of award to the date of payment.

The High Court passed a Judgment dated 10-03-2022 and made the following observations in this case:

Thus, the High Court held that DMRC shall use its funds generated from various metro / rail projects, etc to pay the Award Amount to the Decree Holder, after seeking permission from the Central Government, if necessary, or raise loans, etc to satisfy the Award. In case DMRC falls short of funds to pay the balance amount to the Decree Holder, then with prior approval from the Central Government, properties such as rolling stock, metro railway tracks, machinery, plant, tools, fittings, materials provided by Metro Railway Administration, etc are liable to be attached and also other properties belonging to DMRC, which are under its disposing power, can also be attached in the Execution Proceedings.