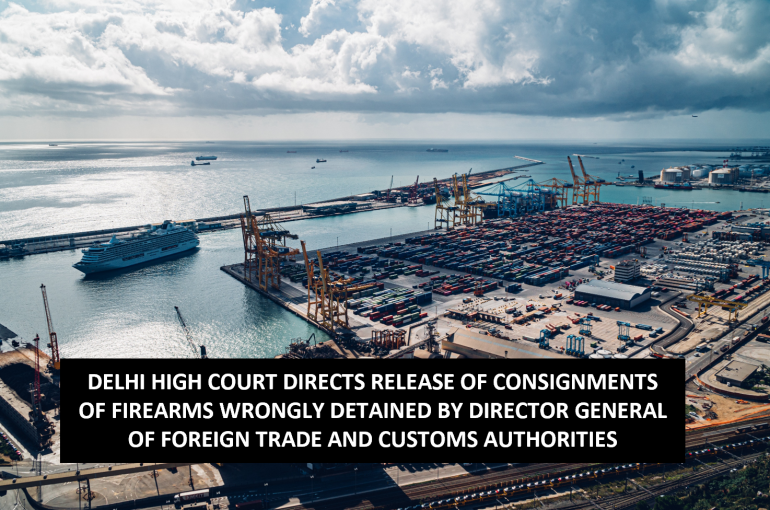 Recently, a Single Judge Bench of the Delhi High Court comprising of Hon’ble Justice Yashwant Varma passed a Judgment dated 07-10-2022 in the matter of Syndicate Innovations International Limited Vs The Office of the Commissioner of Customs (Respondent 1), Director General of Foreign Trade (Respondent 2), Licensing Unit, Delhi Police (Respondent 3), and Others, W.P.(C) 10143/2022 and directed the Respondents to release the detained consignments pertaining to firearms to the Petitioner.

The Petitioner’s grievance was that (a) despite the Petitioner being granted an Import Permission by the Director General of Foreign Trade (DGFT), Respondent 2 and (b) despite thorough checking of Consignments by the Licensing Unit, Delhi Police, Respondent 3, in terms of Rule 88 (5) of the Arms Rules 2016 (Import of arms and ammunition), (c) yet, the said Consignments were withheld by Customs Authorities, Respondent 1 and (d) DGFT sought for further clarifications from the Ministry of Home Affairs (MHA).

Arguments of the Petitioner and Respondents

2) Further, the Licensing Unit, Delhi Police, Respondent 3 also submitted that the Form for applying of License for Manufacturing classifies the heads of “firing pins”, “frame”, “extractor” and “hammer/striker” separately and individually, i.e. separate license had to be applied for each such head. But the Petitioner did not have license to import such additional articles. Thus, the Petitioner had breached the terms and conditions of the Import License.

3) That the MHA had apprised DGFT that the Import License granted to the Petitioner by DGFT only covered “Frames” and “Slides” and did not cover license to import “Frames” and “Slides” with additional parts / components fitted to it, for which separate permission had to be obtained from MHA as per Rule 57 (4) of the Arms Rules (Import of machinery for manufacturing arms and ammunition and other parts etc).

4) That the Petitioner on the other hand contended that the Import License was with respect to the entire firearm and as such there is no provision under the Arms Act 1959 or the Arms Rules 2016 to apply for separate license for firearm components.

The High Court while passing the Judgment dated 07-10-2022 made the following observations regarding whether the Petitioner breached the Import License by importing “Frames” and “Slides” with other components fitted thereto:

(1) That Section 10 of the Arms Act (Licence for import and export of arms, etc) provides that “No person shall bring into, or take out of, India by sea, land or air any arms or ammunition unless he holds in this behalf a licence issued in accordance with the provisions of this Act and the rules made thereunder”.

(2) Further, as per the Arms Rules, the Authority empowered to grant license for manufacture, import and export of arms and ammunitions into India is MHA. Subsequently, the power to issue import and export license under Section 10 of Arms Act, after obtaining clearance from MHA, was delegated to (a) the Secretary in the Government of India, Department of Commerce, Ministry of Commerce and Industries i.e. DGFT, vide MHA Notification dated 22-05-2018, (b) the Secretary to the Government of India in Department of Defence Production, Ministry of Defence, vide MHA Notification dated 01-11-2018, respectively, (c) the power to grant license to manufacture arms was retained with MHA.

(4) Accordingly, the Petitioner entered into Agreement with a German Company for obtaining technical consultancy services and for transfer of technology and thereby, made investments towards import of machinery and software. Further, in pursuance to the License granted by DGFT under EPCG Scheme, the Petitioner placed Orders on 06-06-2022 for import of Frames and Slides from a supplier in Turkey. When the Consignments arrived in India, the Petitioner applied for inspection by Delhi Police on 13-06-2022. Upon inspection being carried out on 15-06-2022, the Delhi Police found that the Frames” and “Slides” imported had pre-installed additional components and hence, sought for clarification from DGFT, which in turn, sought appropriate clarifications from MHA. The MHA responded stating that each part is a separate component for which separate permission had to be obtained from MHA.

(5) The High Court observed the following definitions of firearms and components thereof:

i) Rule 2 (29) of Arms Rules: “main firearm component” means the barrel, frame or receiver, slide, bolt or breech-block of a firearm;

ii) Rule 2 (37) of Arms Rules: “parts and components” mean any element or replacement element specifically designed for a firearm and essential to its operation and includes barrel, frame or receiver, slide or cylinder, bolt or breech block, and any device designed or adapted to diminish the sound caused by firing.

(6) That the additional components found fitted in the imported “Frames” and ‘Slides” such as hammers, catch magazine, safety lock, safety lock support pin and trigger, firing pin, spring of firing pin, lock plate of firing pin and extractor, etc by the Delhi Police are not mentioned separately in the aforesaid definitions of (i) “main firearm component” under Rule 2 (29) of Arms Rules or (ii) “parts and components” under Rule 2 (37) of Arms Rules, etc.

(7) Thus, merely because such additional components were found pre-installed with “Frames” and ‘Slides”, it did not amount to breach of Import License. As a result, the High Court dismissed the Respondents’ submissions that a Frame or a Slide must be understood to mean a component of a firearm which should not or cannot be pre-fitted with other parts thereof.

(8) That further the Indian Trade Clarification based on Harmonized System Classification [ITC (HS)] classifies all parts and components of a firearm. But the ITC (HS) or the Foreign Trade Policy does not classify the aforesaid additional components separately and independently or does not mention that the policy of import forbids parts and accessories being imported in a composite form.

Thus, the High Court observed that (a) the aforesaid additional components are neither classified as a main firearm component nor as parts and components under Rules 2(29) and 2(37) of the 2016 Rules respectively, and (b) the Arms Rules, the ITC (HS) or the Foreign Trade Policy do not provide that a Frame or Slide should not contain an additional component or part of a firearm. Thus, import of a composite part of a firearm i.e. imported article bearing more than one component embedded and fitted as a combined product, is not prohibited under the said laws. As a result, the High Court allowed the Writ Petition and directed the Respondents to release the Consignments to the Petitioner.