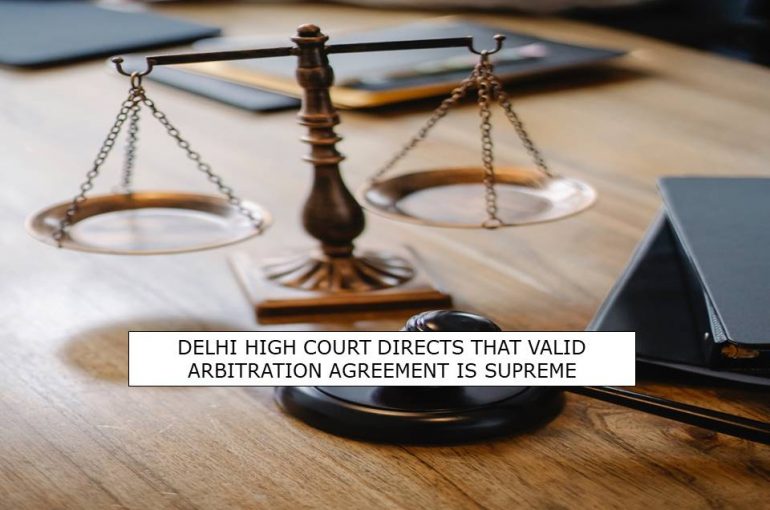 In this case, one, Web Overseas Limited (“Appellant”) and Universal Industrial Plants Manufacturing Company Private Limited (“Respondent”) entered into an Agreement for the purchase of an Oxygen Nitrogen Plant (“Plant”). The Respondent Company agreed to manufacture and supply the Plant with “Bochi, Italian Brand Oxygen Nitrogen Plant Model UBT –100” for a total consideration of USD 435,000 equivalent to ₹2,37,51,000/- (Rupees two crores thirty-seven lacs fifty-one thousand only) at the material time. The Respondent issued an Invoice dated 05.11.2012 for supplying the said Plant. As per the terms and conditions of the Agreement the Appellant had to pay 25% of the invoiced amount in advance i.e. ₹59,37,750/- and the balance 75% was required to be paid before the dispatch of goods.

Accordingly, the Appellant paid a sum of ₹20,00,000/- and sought extension of time for paying the balance from the Respondent. However, the Respondent refused the same. The Appellant’s contention was that both the Parties entered into discussions, and the Respondent, in supersession of the first offer, communicated a revised proposal by an Email dated 04.05.2013. As per the revised offer, the Respondent increased the price of the Plant from USD 435,000 to USD 497,500 and also hiked the consideration amount to 50% which is to be paid in advance as against 25% mentioned in the Invoice dated 05.11.2012.

The Appellant claims that it has one client in Iraq for which it had entered into the said Agreement. But the said client failed to pay the advance as required which ultimately resulted in failure of payment from the Appellant’s side. Thus the revised advance amount was not been paid and the offer lapsed. Further, the Appellant was not interested in accepting the revised terms dated 04.05.2013.

The Appellant instituted a Suit at Delhi District Court (“District Court”) on 13.05.2014 being CS(OS) 1467/2014 for recovery of the advance amount. The Respondent filed an Application under Section 8 (Power to refer parties to arbitration where there is an arbitration agreement) under the Arbitration and Conciliation Act, 1996 (“A&C Act”) seeking that the parties should be referred to arbitration. Thereafter, the Appellant filed an Application under Section 11 (Appointment of Arbitrator) of the A&C Act before the District Court, and the Court directed the Delhi International Arbitration Centre to appoint an arbitrator.

On 25.03.2017, the Appellant filed a Statement of Claim and the Respondent filed a Statement of Defence, on 17.05.2018 before the Arbitral Tribunal (“Tribunal”). Thereafter, on 07.07.2018, the Respondent filed a counter-claim. The Appellant filed an Application praying that the counter-claim be dismissed as being barred by limitation. The Tribunal rejected the said Application by an Order dated 24.06.2020 with the following observations:

The Tribunal had found that “the contract was snapped by the Original Claimant vide its letter dated 30.7.2013. Thus 30.7.2013 is the date when the cause of action allegedly accrued in favor of the Original Respondent to file a counterclaim for arbitration...” and the period of limitation for filing the counter-claim was three years from that date, as per Section 3(b)(ii) (Bar of limitation) of the Limitation Act, 1963 (“Limitation Act”).

Further, the Tribunal held that the Counter-Claim was barred by limitation as i.e. cause of action arose on 30.07.2013, and the Counter-Claim was filed on 07.07.2018. However, under Section 14 (Exclusion of time of proceeding bona fide in court without jurisdiction) of the Limitation Act, a counter-claim can be considered to be filed within the period of limitation as the time spent by the Respondent in pursuing its Application under Section 8 (Power to refer parties to arbitration where there is an arbitration agreement) of A&C Act was excluded. Aggrieved and dissatisfied with the Order dated 24.06.2020, the Appellant preferred an Appeal before the Delhi High Court (“High Court”).

After considering the contention of both parties, the High Court found an error in the view of the Arbitral Tribunal with respect to extension of the prescribed period. The High Court added multiple grounds for reaching the said conclusion and they are as follows:

Accordingly, the Delhi High Court, allowed the Appeal and set aside the Tribunal Order dated 24.06.2020.