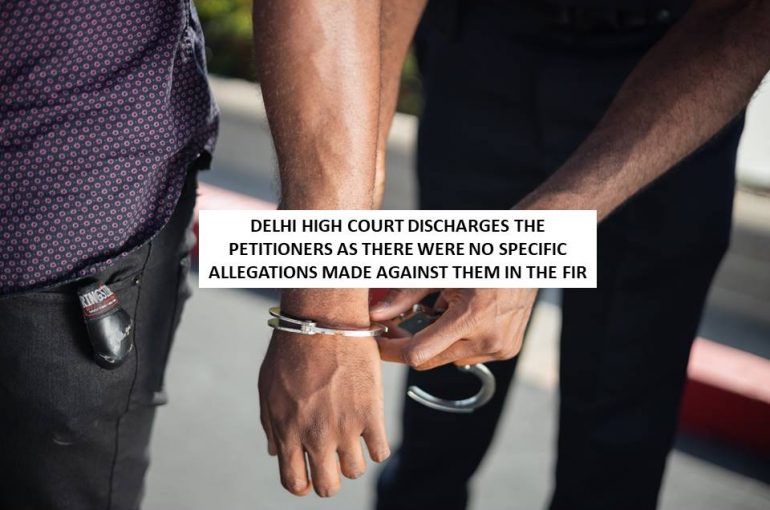 Recently, Justice Swarana Kanta Sharma of the Delhi High Court, passed a Judgment dated 19.12.2022 in the case titled as Suresh Chand Mishra & Anr. v. State (NCT of Delhi) and Anr. Crl.Rev.P.831/2018 and Crl.M.A. 32894/2018 and discharged the Petitioners under Section 506  of the Indian Penal Code, 1860 (“IPC”) (Punishment for criminal intimidation) read with Section 34 of IPC (Acts done by several persons in furtherance of common intention), as the Complainant had failed to make any specific allegations against the Petitioners in the FIR.

Thereafter, the Accused took the Complainant to Kedarnath and repeatedly committed rape on her without her consent and against her will, on the false pretext of marrying her and thereafter he took her to Mathura, Vrindavan, Haridwar, and Agra and again committed rape on her. Thereafter, the Petitioners blocked the Complainant’s number and further threatened to kill her.

Consequently, the Complainant filed an FIR bearing no. 130/2015 under Section 376 IPC (Punishment for rape), Section 366 IPC (Kidnapping, abducting or inducing woman to compel her marriage, etc.) and Section 506 IPC (Punishment for criminal intimidation) at Mansarover Park, North-East District, Delhi. It was further alleged that before the registration of FIR, the Accused and the Petitioners with common intention, committed criminal intimidation against the Complainant by threatening to defame her and kill her which caused threat in her mind.

The Learned Additional Session Judge, Karkardooma Courts, Delhi (“Trial Court”) framed the charges against the Petitioners under Section 506 (Punishment for criminal intimidation) read with Section 34 (Acts done by several persons in furtherance of common intention) of the IPC and passed an Order of Conviction against them, vide Order dated 27.08.2018. It is relevant to note here that separate trial proceedings were going on against the Accused.

Aggrieved and dissatisfied by the Trial Court Order dated 27.08.2018, the Petitioners filed a Revision Petition under Section 397 of the Code of Criminal Procedure, 1973 (“Cr.P.C.”) (Calling for records to exercise powers of revision) read with Section 401 Cr.P.C. (High Court’s powers of revision) before the Delhi High Court.

i) The Learned Counsel for Petitioners contested that the Trial Court committed an error in framing of charges, as facts were not appreciated. It is further stated that the Learned Trial Court has failed to consider the complete statement of the Complainant which was recorded under Section 164 Cr.P.C. (Recording of confessions and statements). Also, the Learned Trial Court failed to consider that the Investigating Officer had not collected any material on record against the Petitioners in respect of the offence under Section 506 IPC read with Section 34 of IPC, and accordingly, the charges had been wrongly framed against the Petitioners.

ii) The Learned Counsel for State contested that the Petitioner along with the Accused had taken the Complainant into confidence by saying that they accept her as their daughter-in-law and the Accused took the benefit of that trust while committing rape upon the Complainant which makes it a prima facie case for the offences punishable under Section 506 IPC read with Section 34 of IPC.

iii) It was further alleged by the Counsel for the State that the Petitioners had threatened the Complainant that she will be killed in case she comes to their house. As mentioned in the aforementioned FIR that “Next day he and his family member blocked their phone number and what’s app also and stopped me to come at their houses and threatened that if you do not stop to come to my house. We will get you to kill and since then I am sad and under stress.”