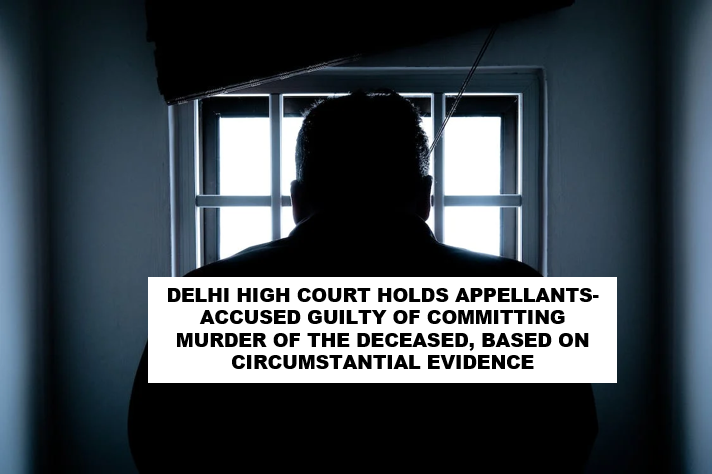 DELHI HIGH COURT HOLDS APPELLANTS-ACCUSED GUILTY OF COMMITTING MURDER OF THE DECEASED, BASED ON CIRCUMSTANTIAL EVIDENCE

Recently, a two Judge Bench of the Hon’ble Delhi High Court comprising of Justice Mukta Gupta and Justice Anish Dayal passed a Judgment dated 23.12.2022 in the cases titled Suraj @ Sonu V. State, Criminal Appeal No. 571 of 2014 and Sonu Dahiya V. State the Govt of NCT of Delhi, Criminal Appeal No. 9 of 2015 and held that based on Circumstantial evidence, the Prosecution had proved beyond reasonable doubt that the Appellants – Accused committed the offence of murder of the Deceased.

In the present case, according to the Prosecution, a Police Patrol on 11.02.2011 found a dead body (Deceased) in Ruchi Vihar Forest, Delhi. As per the Rukka Ex. PW-13/A, FIR No.36 of 2011 was registered by PS Vasant Kunj (South). Since, no identity proof was found on the Deceased, a Public Outcry Notice with the photograph of the Deceased was published, which led to his identification as one, Bansidhar Patra by his office colleagues. Further investigation revealed (i) the involvement of the labour contractors employed with the Deceased’s Employer (M/s Saundraya Decorators) and (ii) subsequent recovery of mobile phone and ATM cards of the Deceased from the Appellants-Accused, Suraj and Sonu Dahiya.

The investigation was concluded, and Charge-Sheet was filed against the Appellants-Accused, whereby, various charges were framed against them, under Section 302 of the Indian Penal Code, 1860 (IPC) (Punishment for murder) / Sec 201 of IPC (Causing disappearance of evidence of offence, or giving false information to screen offender) / Sec 34 of IPC (Acts done by several persons in furtherance of common intention). The Appellants pleaded not guilty of such Charges.

Whether the Trial Court of Delhi was correct in sentencing the Appellants-Accused to life imprisonment under Sec 302 IPC and rigorous imprisonment for two years under Sec 201 IPC?

The High Court passed Judgment dated 23.12.2022 and made the following observations:

Thus, based on the aforesaid reasonings and upon examining the records of the case, the Delhi High Court passed a Judgment dated 23.12.2022 and held that based on circumstantial evidence, the Prosecution had proved that the Appellants – Accused committed murder of the Deceased, beyond reasonable doubt. Thus, the High Court upheld the Trial Court’s Order of Conviction and Order of Sentence dated 28.02.2014 and 05.03.2014 respectively. As a result, the High Court dismissed the Appeals filed by the Appellants-Accused.