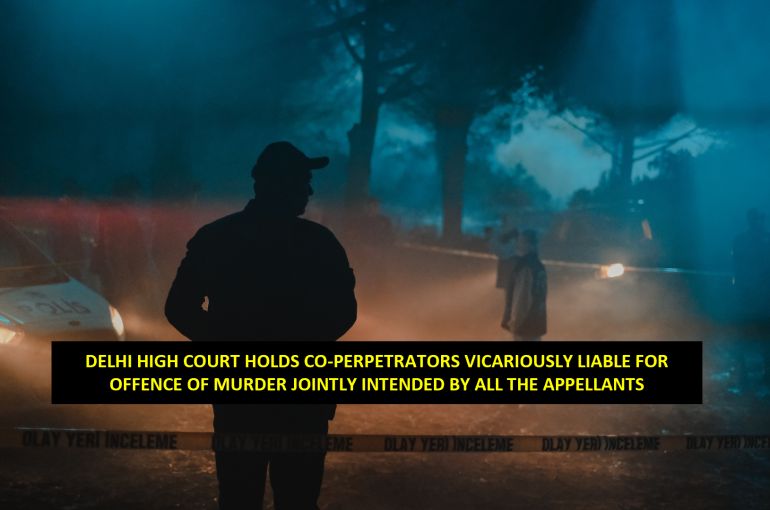 In a recent case of Pankaj @Ishu vs State CRL.A. 1076/2019, Neutral Citation No.2022/DHC/005807 and two other connected matters, a two Judge Bench of the Hon’ble Delhi High Court comprising of Justice Mukta Gupta and Justice Anish Dayal passed a Judgment dated 23-12-2022 and observed that based on the principle of joint liability, under Section 34 of the Indian Penal Code 160 (IPC) (Acts done by several persons in furtherance of common intention) a co-perpetrator, who participates in an offence, would be equally liable for committing the said offence with the other perpetrators.

Thereafter, the Investigating Officer, PS Janakpuri recorded the statement of the Complainant and registered a First Information Report (FIR) No. 283 / 2011 dated 02-09-2011 under Section 302 IPC (Punishment for murder) read with Section 34 IPC (Acts done by several persons in furtherance of common intention).

The Post-Mortem of the Deceased was conducted on 03-09-2011 and the Post-Mortem Report gave detailed description of the deep wounds and external injuries caused to the Deceased on his chest, lower left arm, abdomen, kidney, etc. The cause of death was reported to be haemorrhage shock subsequent to stab injury to the Deceased’s kidney. It was further opined that the cut marks were possible by the knife used by the perpetrators.

Based on the Post-Mortem Report, a Chargesheet was filed against all the three Accused, namely, Pankaj, Ankit and Aman, under Sections 302 IPC, 323 IPC (Punishment for voluntarily causing hurt), 341 IPC (Punishment for wrongful restraint) read with 34 IPC. The Ld. Trial Court passed a Judgment dated 23-08-2019 and convicted all the three Accused for causing hurt to the Complainant and committing murder of the Deceased.

1) That the Accused-Pankaj contended that (i) he was only riding the motorcycle with the other Accused, (ii) he was not carrying any weapon, (iii) he was at a substantial distance from the crime scene, (iv) he did not attack the Complainant / the Deceased, (v) hence, mere presence of Accused-Pankaj at the crime scene cannot raise an inference that he shared a common intention with other Accused to commit murder.

2) That the Accused-Ankit contended that he was not present in the crime scene at the time of occurrence and that he did not have any weapon with him or any motive against the Deceased, so he denied all charges. He further contended that the Complainant’s testimony against him was not reliable as the Complainant was also allegedly not present at the place of occurrence.

3) That the High Court referred to various Supreme Court observations and reiterated that:

3.1 There are various modes of committing a crime, i.e. (a) by personally participating, (b) by instigating, (c) by facilitating or (d) by aiding the execution of a crime.

3.2 As per the principle of shared intent / common intent between two or more perpetrators of crime under Section 34 IPC, the other participants are also held as equal or joint perpetrators as that of the main or principal perpetrator. Section 34 IPC is reproduced below for easy reference:

3.3 In short, Section 34 IPC recognises the principle of vicarious liability, whereby, the other participants / assailants are also held liable for the acts or omissions committed by the main accused with whom such other assailants shared a common intention. Further, the provision does not envisage a separate independent act to be done by all the accused persons for becoming responsible for the ultimate crime, it only requires a common intention shared by all the accused to commit an offence.

3.4 Further, a common intention does not compulsorily require a pre-arranged plan, it may be developed on the spot or during the course of commission of the offence. The only test is to prove that such pre-planning preceded the act constituting the offence, which can be gathered from the proved facts.

3.6 As per Section 33 IPC, a criminal act in Section 34 IPC includes omission to act. Thus, culpability under Section 34 IPC cannot be excluded in respect of the Accused-Pankaj by merely claiming that he did not do anything, as he was standing at a distance, while the offence was being committed by the other Accused. The aforesaid facts clearly establish that the Accused Pankaj had preconceived / premeditated the result that would ensue in furtherance of the common intention shared with the other Accused, to hurt the Complainant and murder the Deceased.

Thus, based on the aforesaid observations, the High Court upheld the Trial Court Judgment dated 23-08-2019 and the conviction and sentence awarded to all the three Accused and thereby, dismissed the Appeals filed by the Accused persons.