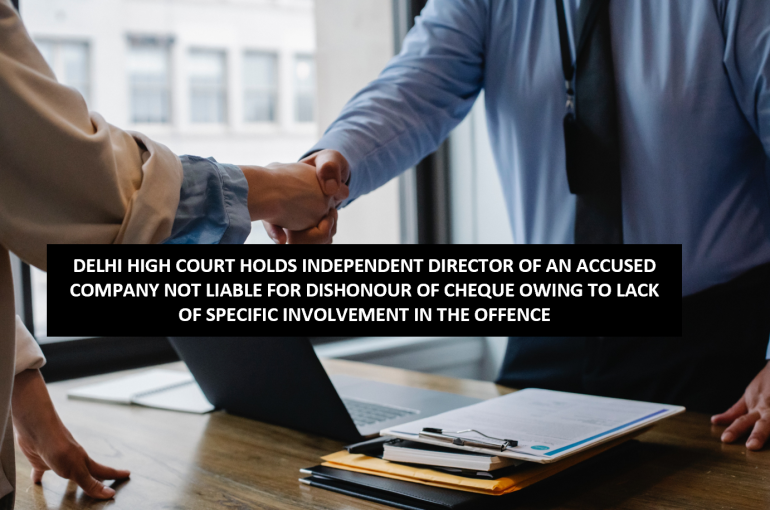 Recently, Justice Swarana Kanta Sharma of the Hon’ble Delhi High Court has passed a Judgment dated 19-12-2022 in the matter of Prakash Chand Vs State & Anr, Crl.M.C. 307/2020 and observed that for imposing liability on the director or officer-in-charge of an accused company for dishonour of cheque under the Negotiable Instruments Act 1881 (NI Act), the Court has to consider the specific role he/she played in the incriminating act / alleged offence and not his/her designation or status in the accused-company alone.

Aggrieved, the Complainant sent a Statutory Demand Notice dated 07-03-2017 and thereafter, an Addendum Notice dated 09-03-2017 to the Accused-Company demanding payment of the outstanding amounts.

But as the Accused-Company failed to respond to the Complainant’s Notices, the Complainant filed a Complaint No. 16201 / 2017 titled as M/s PEC Ltd. v. M/s KS Oil Ltd. & Ors. under Section 138 NI Act (Dishonour of cheque for insufficiency, etc., of funds in the account) and Section 141 NI Act (Offences by companies) before the Metropolitan Magistrate-04, Patiala House Court, New Delhi (Trial Court) on 27-04-2017. The Complaint was filed against the Accused Company and 12 people, who were directors of the Accused Company between 2012 and 2017 including past, non-executive and nominee directors. Thereafter, the Trial Court vide Order dated 28-11-2018 (Summoning Order) summoned all the Accused-Directors including the Petitioner, Mr. Prakash Chand.

The High Court, vide Judgment dated 19-12-2022, made the following observations in this case:

1) That as per Section 141 of NI Act, an officer, who was in charge of, and was responsible to the company for the conduct of its business would be held liable for committing an offence of dishonour of cheque under Section 138 of NI Act only if it is proved that the offence was committed with his consent / knowledge / connivance / neglect, etc. In the event that the concerned officer proves that such offence was committed without his knowledge or that he had exercised due diligence to prevent the commission of the offence, he would not be held liable under Section 141 of NI Act.

2) That as per Section 149 of the Companies Act 2013 (Company to have Board of Directors) an independent director[i], a non-executive director not being the promoter or the key managerial personnel would be held liable only in respect of such acts or omissions of the company, which had occurred with his knowledge, attributable through Board processes, etc.

3) That the Supreme Court has in various cases made the following observations regarding the circumstances when a director can be held vicariously liable under Section 141 of NI Act:

3.1 That merely being a director of a company is not sufficient to make him / her liable under Section 141 of NI Act, as there is no deemed liability of a director in such cases and there is no presumption that every director knows about the alleged transaction.

3.2 That the liability under Section 141 NI Act depends on the role a person plays in the affairs of an accused company and not on his designation or status alone.

3.3 “What is required is that the persons who are sought to be made criminally liable under Section 141 should be, at the time the offence was committed, in charge of and responsible to the company for the conduct of the business of the company…..”

3.5 That the vicarious liability under Section 141 of NI Act has to be pleaded and proved and not to be inferred by the Trial Court.

3.6 That in the present case, the Petitioner-Accused Director was an Independent Director of the Accused Company at the time of commission of alleged offence. But the Complaint filed by the Complainant-Company did not make any averment with respect to the specific role / involvement of the Petitioner in the alleged offence committed by the Accused Company under Section 138 NI Act.

3.7 Further, the Complaint merely alleged that “All the accused nos. 2 to 14 were at the helm of affairs of the Company at the time of its dealing with the Complainant and/or at the time when the subject matter cheques were issued to the Complainant and at the time of dishonour of cheques.” Such general allegations or bald assertions may be sufficient to implicate the Managing Director of the Accused Company or the signatories of the Cheques, but it would not be sufficient to attract vicarious liability against the Independent Directors or Non-Executive Directors of the Accused Company. Hence, the High Court held that the Petitioner, who is the Independent Director of the Accused Company, would not be held vicariously liable under Section 141 NI Act for dishonouring of Cheques that were not even signed by him.

Thus, based on the aforesaid observations, the High Court held that the Trial Court erred in summoning the Petitioner in the present case and further observed that summoning an accused person cannot be resorted to as a matter of course and the order must show application of mind. Therefore, the Petition was allowed and the Trial Court’s Summoning Order dated 28-11-2018 was quashed to the extent that it issued Summons to the Petitioner for the alleged offence of dishonour of Cheques under Section 138 of NI Act.