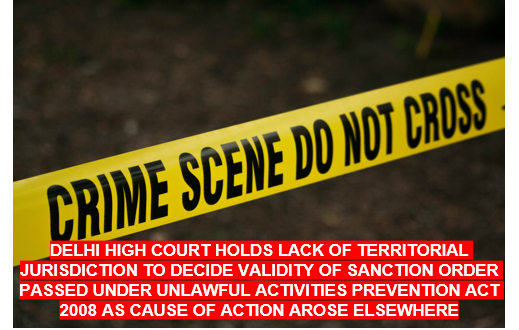 In the present case titled as Sachin Hindurao Waze v. Union Of India W.P.(CRL) 88/2022, a two Judge Bench of the Delhi High Court comprising of Justice Mukta Gupta and Justice Anish Dayal, passed a Judgment dated 07.10.2022  and ruled that the Delhi High Court would not have the territorial  jurisdiction to decide the validity of a Sanction Order passed by the Sanctioning Authority under the Unlawful Activities Prevention Act, 2008 (UAPA) merely because the latter is located in Delhi, when in fact, the cause of action and all other ingredients, events and proceedings relating to the case took place in another jurisdiction.

The Former Mumbai Police Officer, Mr. Sachin Hindurao Waze (Petitioner) was  arrested by the National Investigation Agency (NIA) in the case pertaining to the recovery of explosives and threat note from a Mahindra Scorpio Vehicle found near Industrialist Mukesh Ambani’s house. The Petitioner has been remanded in NIA Custody till 25.03.2022. The NIA has accused the Petitioner and 9 others under Sections 302 (Punishment for murder), 120B (Punishment of criminal conspiracy), 201 (Causing disappearance of evidence of offence, or giving false information, to screen offender), 364 (Kidnapping or abducting in order to murder), 403 (Dishonest misappropriation of property) of the Indian Penal Code, 1862 (IPC) and Sections 16 (Punishment for terrorist act.), 18 (Punishment for Conspiracy) & 20 (Punishment for being a member of a terrorist gang) of UAPA. The Ministry of Home Affairs passed the Impugned Order dated 02.09.2021 sanctioning the prosecution of the Petitioner under the UAPA.

The Petitioner filed a Writ Petition before the Delhi High Court praying for striking down of Section 15(1) (Terrorist act) of UAPA for being ultra vires Articles 14 and 21 of the Constitution of India and to quash and set aside the Impugned Order dated 02.09.2021 passed by the Union of India (Respondent no.1). The Petitioner also challenged the Sanction Order for his prosecution under UAPA given by the Ministry of Home Affairs (MHA), in September 2021.

A preliminary objection was raised that the Delhi High Court has territorial jurisdiction over the issue, as the Sanction Order was passed by the MHA, which is located in Delhi.

Submissions on behalf of the Petitioner

Mr. Santosh Paul, the Learned Senior Counsel on behalf of the Petitioner made the following submissions:

Submissions on behalf of Respondent no. 1

Further, he submitted that since the Trial Court in Mumbai had already taken cognizance, hence, the Respondent No. 1’s request for Sanction was no longer relevant. As a result, the issue of cognizance would fall under its purview if the Delhi High Court were to contemplate quashing of the Sanction Order any way (based on the Petitioner’s argument). In addition, Mumbai was the natural jurisdiction since the Petitioner was a resident of Maharashtra and therefore there was no reason why he would find it convenient to challenge the Order of Sanction before the Delhi High Court.

The Division Bench while dismissing the Writ Petition made it crystal clear that when proceedings are pending elsewhere, the UAPA’s Sanctioning Authority i.e. MHA’s Order cannot be challenged in Delhi just because MHA is in the National Capital and further observed as follows:

“(i) The relief sought in the writ petition is firstly relating to the unconstitutionality of Section 15 (1) of UAPA; and secondly to quash and set aside the impugned Order dated 02.09.2021 passed by the Respondent No.1 according sanction for prosecution under Section 45(1) UAPA for prosecuting the accused (including the petitioners and others) and taking cognizance of the said offence by the Court of competent jurisdiction. However, this determination is restricted to the threshold issue of territorial jurisdiction of this Court as encapsulated in the Order of 03.03.2020.

(ii) A perusal of the FIR No.35/2021 dated 25.02.2021 registered at PS Gam Devi for offences punishable under Section 286/465/473/506 (2)/120 B IPC and Section 4 (A)(B)(i) of the Indian Explosives Substance Act, 1908 would categorically indicate that all events forming the basis of the FIR had occurred in Mumbai e.g. seizure of the vehicle Mahindra Scorpio, discovery of the explosives in the sack found in the vehicle and discovery that the registration of the number plate was in the name of an employee of Reliance Company. The writ petition is further appended with various other documents relating to police custody, remand of the petitioner in Mumbai including applications for bail, a copy of charge sheet dated 03.09.2021, documents relating to the proceedings before the Special Judge, NIA at Mumbai, all proceedings being in Mumbai. It is therefore quite indubitable that the alleged offence, the subsequent complaint and investigation, the FIRs and the RC, filing of the charge sheet and all proceedings relating thereto including custody of the accused have all taken place in Mumbai.

(iii) The only peg on which the petitioner wishes to hang and support its plea before this Court is on the Order of sanction which was by the Authority constituted under the Order of the Home Ministry dated 03.07.2015. Therefore, even as per the petitioner, in the full canvas of the matter the only event which has happened in the jurisdiction of this Court is this impugned decision. In the considered opinion of this Court the mere fact that the authority which awards sanction for prosecution under UAPA is located in Delhi, will not give this Court the jurisdiction to grant relief to quash that Order sans the fact that all possible ingredients, events and proceedings in relation to the said matter are taking place in Mumbai.

(iv) The contention of the learned ASG that finally the cognizance of the charge-sheet have been taken now by the Special Court in Mumbai and trial has to commence thereafter, which trial court would be competent to also adjudicate upon the challenge that the petitioner may have to the sanctioning Order, also finds favor with this Court. “

Thus, while removing all the curtains of doubts and uncertainties, the High Court envisaged that a Court shouldn’t be persuaded to accept such jurisdiction completely divorced and dehors an assessment of forum conveniens if there is only a tiny fraction or iota of a cause of action potentially clothing a particular High Court jurisdiction [per Article 226(2) of the Constitution of India] to decide a Writ Petition. Thus, the High Court dismissed the Writ Petition.