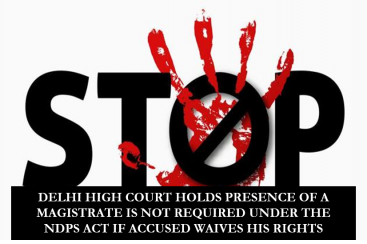 The Two Judge Bench of the Hon’ble #DelhiHighCourt comprising of Justices Siddharth Mridul and Talwant Singh passed a Judgment dated 08-06-2021 in the case of Nabi Alam @ Abbas v. State (Govt. of NCT of Delhi) {BAIL APPLN. 2641/2018 & CRL.M.(BAIL) 555/2021} and held that under Section 50 of The #NarcoticDrugs and #PsychotropicSubstances Act, 1985 (the Act) presence of a #Magistrate during search of Contraband Articles is not compulsory if the Accused decides to waive his rights.

In the present case, the Applicant/Accused filed a Bail Application under Section 439 of the Code of Criminal Procedure, 1973 (hereinafter referred to as ‘Cr.P.C.’), primarily seeking regular bail pending ensuing trial before the Court of learned Additional Sessions Judge/ Special Judge (NDPS). This was later on dismissed by the learned Sessions Court víde order dated 13-07-2018.

Thereafter, the present Bail Application under Section 439 Cr.P.C was filed, which was referred to the Division Bench by the Learned Single Judge of the High Court of Delhi (High Court). The question that arose before the Division Bench was whether search has to be conducted before a Gazetted Officer/Magistrate even after the suspect/accused waives off his right.

While placing reliance on the case of Vijaysinh Chandubha Jadega v. State of Gujarat s AIR 2011 SC 77, wherein it was held that the suspect has an option as to whether he can choose to exercise the right provided to him under the provision. The Apex Court in this regard made the following observation:

“….insofar as the obligation of the authorised officer under sub-section (1) of Section 50 of the NDPS Act is concerned, it is mandatory and requires strict compliance. Failure to comply with the provision would render the recovery of the illicit article suspect and vitiate the conviction if the same is recorded only on the basis of the recovery of the illicit article from the person of the accused during such search. Thereafter, the suspect may or may not choose to exercise the right provided to him under the said provision.”

In this regard the Division Bench of the High Court made the following observation:

“There is no requirement to conduct the search of the person, suspected to be in possession of a narcotic drug or a psychotropic substance, only in the presence of a Gazetted Officer or Magistrate, if the person proposed to be searched, after being apprised by the empowered officer of his right under Section 50 of the NDPS Act to be searched before a Gazetted Officer or Magistrate categorically waives such right by electing to be searched by the empowered officer.”

“The words “if such person so requires”, as used in Section 50(1) of the NDPS Act would be rendered otiose, if the person proposed to be searched would still be required to be searched only before a Gazetted Officer or Magistrate, despite having expressly waived “such requisition”, as mentioned in the opening sentence of sub-Section (2) of Section 50 of the NDPS Act.”