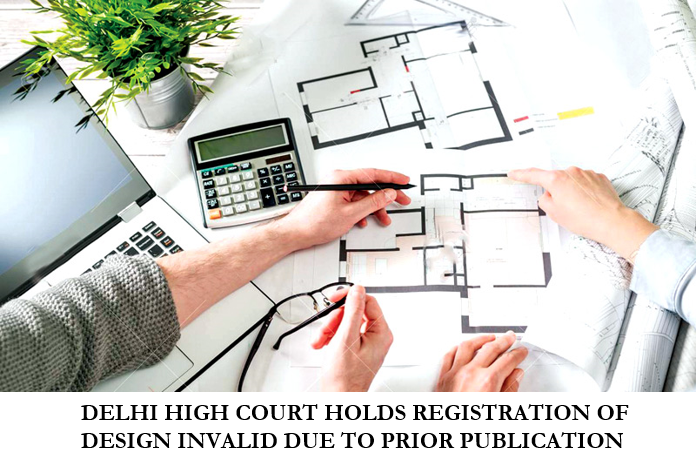 The #DelhiHighCourt has in a matter of M/S Kamdhenu Limited vs M/S Aashiana Rolling Mills Ltd passed a Judgement dated 12-05-2021, where the High Court decided upon the issue of Defendant’s alleged Einfringement of Plaintiff’s registered #design.

In this case, M/s Kamdhenu Limited (Plaintiff) had registered a design in respect of steel bars for which the Controller General of Patents, Designs and Trade Marks (Controller) issued a Certificate of Registration dated 29-08-2014 (Registered Design) w.e.f. 14-01-2013. But the Plaintiff discovered in June 2017, that M/s Aashiana Rolling Mills Limited (Defendant) is allegedly selling steel bars having design identical to that of the Registered Design of the Plaintiff.

Aggrieved, the Plaintiff filed a Suit before the District Court at Saket on 13-06-2017 seeking an injunction against the Defendant’s alleged infringement of Plaintiff’s Registered Design. The District Court passed an Order of Injunction dated 15-06-2017 and ordered for inspection of Defendant’s premises and seizure of infringing goods.

Thereafter, the case got transferred to the Delhi High Court, where the Single Bench confirmed the Order of Injunction dated 15-06-2017 of the District Court, vide Order dated 03-11-2017.

Aggrieved, the Defendant challenged the said Order dated 03-11-2017 of the Single Bench in an Appeal before the Division Bench of the Delhi High Court, on the ground that the registration of Design by Plaintiff was itself invalid, as the said Design was merely copied from prior published standards. The Defendant further contended that the Plaintiff’s Design was incapable of registration by virtue of Section 4(b) of the Designs Act 2000 (Act) and thus, was liable to be cancelled under Section 19 of the Act.

Section 4 (b) of the Act provides that a design which has been disclosed to the public anywhere in India or in any other country by publication in tangible form or by use or in any other way prior to the filing date, or where applicable, the priority date of the application for registration, shall not be registered.

The Division Bench of the High Court held that there was no novelty and distinctiveness present in the Plaintiff’s Registered Design and that the Defendant was following the known common standards available in the public domain for manufacture of steel bars. Hence, the Division Bench of the Delhi High Court set aside the Order of Injunction, vide Judgment dated 23-08-2018.

Aggrieved, the Plaintiff filed a Special Leave Petition before the Supreme Court, but the same was declined, vide Order dated 11-02-2019.

Meanwhile, during the pendency of the Appeal before the Division Bench of the Delhi High Court, the Defendant filed an Interlocutory Application seeking dismissal of the Suit for Injunction filed by the Plaintiff.

The Delhi High Court made the following observations in the said Interlocutory Application:

1) That in order to destroy the novelty of a design:

i) An earlier design must be published in respect of the same article.

ii) The prior publication must contain clear and unmistakable directions to make an article with the shape or pattern which is the same as, or similar enough to the registered design in suit to deprive it of novelty.

2) That the Defendant has relied upon several international standards such as the British Standard B500C, the German Standard of 1984, the Polish Standard of 2006, etc in manufacturing the steel bars. These Standards have been published much before the Plaintiff had registered its Design on 14-01-2013.

4) Moreover, the Plaintiff’s Registered Design is not significantly distinguishable and distinct from the published International Standards.

Hence, the Delhi High Court held that the Defendant has established that the Plaintiff’s Registered Design was a prior published design and thus, registration of such designs is contrary to Section 4 of the Act. Therefore, the High Court allowed the Interlocutory Application for the aforesaid reasons and further, dismissed the Suit for Injunction filed by the Plaintiff.