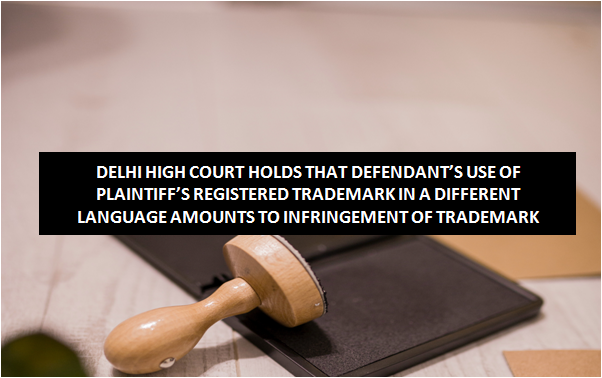 A Single Bench of the Delhi High Court presided by Justice Navin Chawla passed a Judgment dated 23.12.2022 in New Bharat Overseas versus Kian Agro Processing Private Limited & Ors. bearing CS (Comm) 280/2020 and passed an Ad Interim Injunction Order restraining the Defendants from affixing the Registered Mark ‘TAJ MAHAL’ or any other mark deceptively similar to the same, for the purpose of selling / marketing / exporting rice, during the pendency of the Suit.

The Plaintiff, New Bharat Overseas is engaged in the business of processing, marketing and exporting rice of various kinds. It had adopted the mark ‘TAJ MAHAL’ and has been using the said Mark, which is registered in Class 30 under the provisions of the Trade Marks Act, 1999 (‘the Act’) read with the Trade Marks Rules, 2002, since the year 1978 and has been selling the same all over India, and also exporting to Europe, U.S.A., Canada and the Middle East since the year 1978.

The Plaintiff filed an Original Suit before the High Court of Delhi alleging that the Defendant No. 1, Kian Agro Processing Private Limited and its Managing Directors, Defendant No.2 and 3 have been using the already Registered Mark of the Plaintiffs i.e. ‘TAJ MAHAL’ for their business of manufacture and export of rice. The Plaintiff filed another Application seeking Impleadment of Defendant No.4, who used to be a Distributor of the Plaintiff earlier, as it clandestinely obtained the registration of the impugned Mark ‘TAJ MAHAL’ in Saudi Arabia, while continuing to import rice from the Plaintiff. The said Application for Impleadment of Defendant No.4 was allowed by the High Court. It was the Plaintiff’s case that the Defendants’ use of the Mark would amount to infringement in terms of Section 29 of the Act (Infringement of registered trademarks) and Section 56 of the Act (Use of trade mark for export trade and use when form of trade connection changes).

The Hon’ble Delhi High Court observed that it was clear that the Mark using which the exports were being made by the Defendants was identical to the Registered Trade Mark of the Plaintiff and the class of goods for which it was being used, i.e., rice, was also identical. Therefore, in terms of Section 29(2)(c) read with Section 29(3) of the Act, such use would amount to infringement of the Registered Trade Mark of the Plaintiff.

The High Court of Delhi rejected the plea of the Defendants that the Mark was being affixed in Arabic language, as Section 29(9) of the Act states that where the distinctive element of a registered trade mark consisted of or included words, the trade mark may be infringed by the spoken use of those words. The High Court further relied on the judgment in the case of  Indian Express Ltd. v. Chandra Prakash Shivahare, 2015 SCC OnLine Bom 5541, wherein it was held that “it was well settled that the use of the infringing mark in the form of a translation (same trade mark but in a different language) or its transliteration amounted to infringement”.

The Hon’ble High Court also relied the case of Coca-Cola Company v. Bisleri International (P) Ltd., 2009 SCC OnLine Del 3275, where it was held that exporting goods from a country was to be considered as a sale within the country from where the goods were being exported and the same amounted to infringement of a trade mark.

Thus, the Hon’ble Delhi High Court, vide Judgment dated 23.12.2022, granted Ad-Interim Injunction in favour of the Plaintiff and restrained the Defendants from affixing the mark ‘TAJ MAHAL’ or any other mark deceptively similar to the registered marks of the Plaintiff for the purposes of selling / marketing / exporting rice, during the pendency of the Suit.