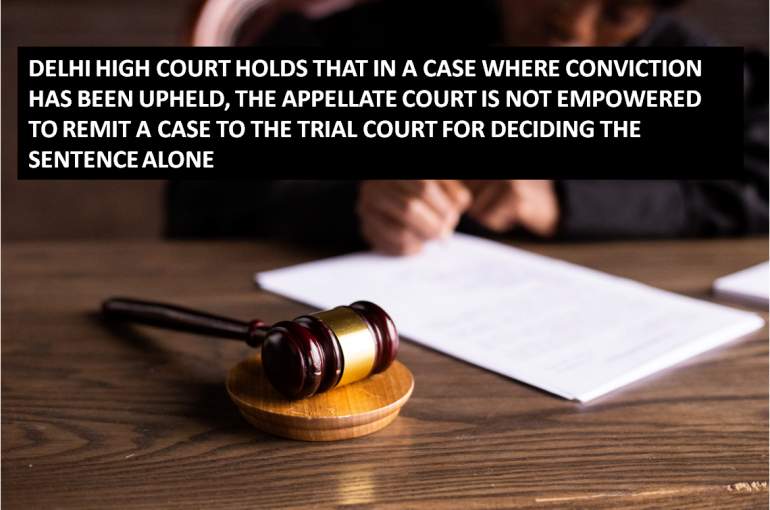 DELHI HIGH COURT HOLDS THAT IN A CASE WHERE CONVICTION HAS BEEN UPHELD, THE APPELLATE COURT IS NOT EMPOWERED TO REMIT A CASE TO THE TRIAL COURT FOR DECIDING THE SENTENCE ALONE

A Single Bench of the Delhi High Court presided by Justice Swarana Kanta Sharma passed a Judgment dated 19.12.2022 in Delhi Pollution Control Committee versus Raj Kumar Gupta arising out of CRL.REV.P. 111/2018 and observed that as per Section 386(b) (Power of the Appellate Court) of the Code of Criminal Procedure, 1973 (Cr.P.C.), the Appellate Court is not empowered to send the case back to the Trial Court to hear the matter and decide upon the aspect of sentence alone, when the Appellate Court had already confirmed and upheld the conviction of the Respondent.

In the present case, one, Raj Kumar Gupta, the Respondent herein, is the sole proprietor of M/S Kanwarji Raj Kumar, which prepares and sells sweets and namkeens and also runs a workshop / unit for the said purpose, has been allegedly draining the untreated trade effluents from his unit into a drain thereby causing pollution. The Hon’ble Supreme Court in an earlier case of Writ Petition (Civil) no. 725/94, passed orders stating that no industrial effluents are allowed to be discharged directly or indirectly into River Yamuna with effect from November, 1999. Pursuant to the aforesaid orders of the Apex Court, the Petitioner, Delhi Pollution Control Committee (DPCC) and the Department of Environment issued public notices in newspaper directing all water polluting units located in industrial and non-conforming areas of Delhi to put up individual effluent treatment plants for treating their effluents prior to discharging it, on or before the November, 1999, so as to meet the prescribed standards of Central Pollution Control Board, failing which it would attract closure of units including penal action as per law.

On 03.06.2000, the Vigilance Squad constituted by the Govt. of NCT of Delhi consisting of a Team of S.D.M (Environment) and Engineers of DPCC, carried out the inspection of the Industrial Unit of the Respondent. The said Inspection Report stated that :- i) The Unit was found in operation, ii) no treatment facility was provided for the treatment of trade effluents, iii) entire trade effluents generated, during the process of washing of moulds/ dishes/ containers/ floor while preparation of sweets/namkeens, were being discharged by the Unit without treatment into public sewer.

Thus, a Complaint was filed under the provisions of Section 24 (Prohibition on use of stream or well for disposal of polluting matter, etc.), Section 25 (Restrictions on new outlets and new discharges), Section 26 (Provision regarding existing discharge of sewage or trade effluent) and Section 33A (Power to give directions) read with Sections 41, 42, 43, 44 and 49 (Chapter VII Penalties and Procedure) of Water (Prevention and Control of Pollution) Act, 1974 (Water Act) by the Petitioner -DPCC in the Court of Additional Chief Metropolitan Magistrate, Tis Hazari Courts, Delhi (Trial Court).

Subsequently, an Appeal was filed by the Respondent before the Special Judge, Tis Hazari Court, Delhi (Appellate Court), which passed an Order dated 11.08.2017 and upheld the conviction but set aside the sentence awarded to the Respondent by the Trial Court. The Appellate Court further remanded the case back to the Ld. Trial Court to afford an opportunity to the Parties to place necessary material on record and to lead their evidence on the aspect of sentence.

Aggrieved by the aforesaid Order of the Appellate Court, the Petitioner-DPCC filed a Criminal Revision Petition before the High Court of Delhi.

The High Court passed a Judgment dated 19.12.2022 and made the following observations in this case:

(a) in an appeal from an order or acquittal, reverse such order and direct that further inquiry be made, or that the accused be re- tried or committed for trial, as the case may be, or find him guilty and pass sentence on him according to law;

(b) in an appeal from a conviction- (i) reverse the finding and sentence and acquit or discharge the accused, or order him to be re- tried by a Court of competent jurisdiction subordinate to such Appellate Court or committed for trial, or (ii) alter the finding, maintaining the sentence, or (iii) with or without altering the finding, alter the nature or the extent, or the nature and extent, of the sentence, but not so as to enhance the Same;

(d) in an appeal from any other order, alter or reverse such order;

(e) make any amendment or any consequential or incidental order that may be just or proper; Provided that the sentence shall not be enhanced unless the accused has had an opportunity of showing cause against such enhancement: Provided further that the Appellate Court shall not inflict greater punishment for the offence which in its opinion the accused has committed, than might have been inflicted for that offence by the Court passing the order or sentence under appeal.”