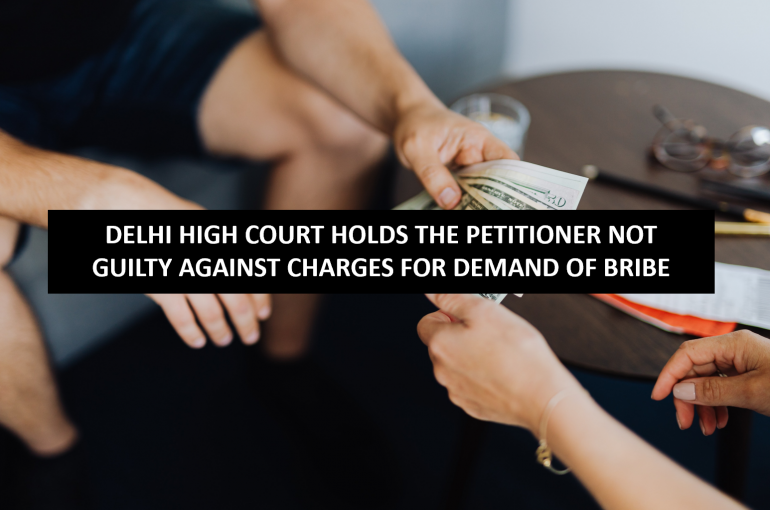 Recently, Hon’ble Ms. Justice Swarana Kanta Sharma of the Delhi High Court passed a Judgment dated 08-12-2022 in the matter of Joginder Singh Malik vs CBI, Crl.A. 1302/2010 and acquitted the Petitioner-Accused on the ground that the Prosecution failed to prove the offence of demand of bribe / illegal gratification against the Accused beyond reasonable doubt, under the provisions of the Prevention of Corruption Act, 1988 (PC Act).

In the present case, a written Complaint dated 09-01-2009 was lodged at S.P. (CBI), CGO Complex, New Delhi, by one, Harish Kumar Anand (Complainant) against the Petitioner-Joginder Singh Malik (Accused), who was working as a Section Engineer, Delhi Division, Northern Railways, regarding his demand for bribe of Rs. 15,000/- for making the final bills pertaining to three work orders. The Complaint was verified based on the recordings of conversation between the Complainant and the Accused. On the next day, the CBI constituted a team of undercover officers and made a plan to catch the Accused red-handed as follows:

i) They sprinkled some phenolphthalein powder on the cash notes and gave it to the Complainant and directed him to hand over the same to the Accused when he so demands.

ii) They even arranged a Digital Voice Recorder (DVR) with few empty cassettes for the purpose of recording any possible conversation between the Complainant and the Accused.

iii) They also arranged a compact voice recorder for transferring the audio recording from DVR to regular audio cassettes.

iv) One of the undercover Officers stayed close to the Complainant to overhear their conversation and to witness the transaction of bribe as a Shadow Witness, when the Complainant visited the Accused at the Delhi Cantt. Railway Station, Platform No. 4.

v) The other Officers took their respective positions in a disguise at Platform No. 4.

vi) Once the Complainant handed over the bribe amount to the Accused and signalled the undercover Officers, they rushed towards the said location and immediately caught the right and left hands of the Accused.

vii) As soon as the Officers disclosed their identity to the Accused, the latter managed to free his left hand by force and removed the cash amount from his pocket and threw it on the ground. One of the Officers, who was witness to the transaction of bribe, took the tainted money.

viii) Upon testing the tainted money, the Accused’s hands and his pocket, in freshly prepared colourless solution of sodium carbonate, all were found pink. The said pink solution was stored in a bottle.

ix) The recorded conversation between the Complainant and the Accused was transferred into an audio cassette.

(2) The Senior Divisional Engineer-V, Northern Railway, Delhi Division (Sanctioning Authority) granted prior sanction under Section 19 of PC Act for prosecuting the Accused for offences punishable under the PC Act.

(3) The Appellant was charged for offences punishable under Section 7 of PC Act (Public servant taking gratification other than legal remuneration in respect of an official act) and Section 13(2) read with Section 13(1)(d) of PC Act (Criminal misconduct by a public servant) .

(4) Various Prosecution Witnesses were examined including the Railway Authorities, the Sanctioning Authority, the Nodal Officer of IDEA Cellular, the Complainant, the Shadow Witness, the CBI Team Officers, the Investigating Officer, etc.

(5) Various Defense Witnesses including the Nodal Officer of Airtel, Railway Officers, etc were examined and the statement of the Accused was also recorded under Section 313 of the Code of Criminal Procedure 1973 (CrPC) (Power to examine the accused).

(6) Based on the aforesaid evidences, the Trial Court vide Judgment dated 08-10-2010 held the Accused guilty of committing various offences punishable under Section 7 and Section 13(2) read with Section 13(1)(d) of PC Act, as it was established that he abused his official position (a) by demanding bribe / illegal gratification, on the pretext of preparing the bills for the Complainant, and (b) as the tainted amount was recovered from his possession.

Aggrieved, the Accused filed an Appeal under Section 374 of CrPC (Appeals from convictions) before the Delhi High Court. The High Court vide Judgment dated 08-12-2022 made the following observations:

3) That regarding the tape-recorded conversations which allegedly revealed the demand of bribe on the part of the Accused, there was no transcription of such audio recording produced by the Prosecution, which could prove the voluntary acceptance of bribe by the Accused beyond reasonable doubt. Further, the said recording done in DVR was transferred in a blank audio cassette namely “Sony EF-60” with the help of a Mini Cassette player. But the High Court observed that it is a matter of common knowledge that Sony EF-60 is a normal audio cassette which cannot be played or recorded in a Mini Cassette Player/Recorder. Further, the said recordings were not even sent to forensic examination and a certificate as required under Section 65B of the Evidence Act 1872 (Admissibility of electronic records) was also not produced with respect to any of the recordings made by the Prosecution. Thus, the voice recordings were held to be inadmissible in evidence.

4) Furthermore, the Complainant’s version in his Section 161 CrPC statement (Examination of witnesses by police) and in his cross-examination before the Trial Court about how the Accused had allegedly put forward his demand for bribe on 09-01-2009 and 10-01-2009 had discrepancies. In the statement before the Police, he stated that the Accused demanded bribe through gestures of hand, whereas, in his statement before the Trial Court, he deposed that the Accused demanded bribe orally. Thus, the High Court observed that the conviction of the Accused cannot be solely based on the Complainant’s version and as such benefit of doubt ought to be given to the Accused, in the absence of proof of other evidence against him.

Hence, based on the aforesaid grounds, the High Court held that a demand of bribe is a sine qua non (pre-essential condition) to convict the accused for offences punishable under Section 7 and 13(1)(d) read with Section 13(2) of the PC Act and in the absence of any proof of demand or acceptance of bribe, the mere recovery of tainted notes and conduct of phenolphthalein tests cannot establish the offence under the PC Act against the Accused. Thus, the High Court allowed the Appeal and acquitted the Accused. As a result, the Trial Court Judgment dated 08-10-2010 was set aside.