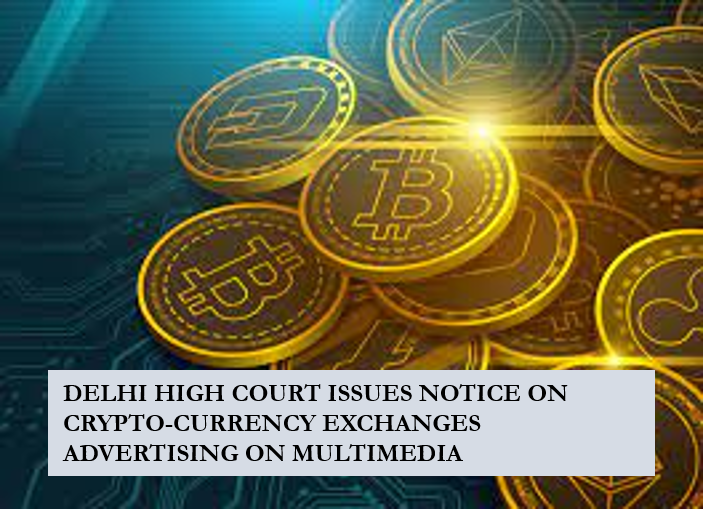 A Division Bench of the Hon’ble #HighCourt of #Delhi comprising of Chief Justice DN Patel and Justice Jyoti Singh issued a Notice on the plea seeking issuance of #guidelines or rules to be framed against the #cryptocurrency #exchanges in India #advertising on #televisions without adequate standardized #disclaimers.

The Petition makes established crypto-exchanges as Respondents that are running advertisements regarding investments related to crypto-currencies and crypto-assets. Furthermore, the Petition also makes SEBI and Secretary, Ministry of Information and Broadcasting, Government of India as a Respondent.

The Plea in the Petition reads as follows:

“An ordinary retail investor who views the audio-visual advertisement on television run by the Respondents No. 1-3 on a regular basis, as well as on online websites like YouTube, may suffer immense losses as a result thereof whilst on the other hand; having a disclaimer on screen after the end of the advertisement with voice over in English and Hindi (as may be appropriate) and correct placing and at least 80% coverage in terms of the size on screen to be viewable and readable by the investor, may instil a wisdom of researching and reading up on the risk profiles surrounding crypto-assets prior to investing his hard earned money in digital assets not understood by him.”

1) To issue a writ, orders or direction in the nature of mandamus directing the Respondent No. 4 to take effective steps and issue appropriate guidelines/circulars/notices/rules against crypto-asset exchanges in India advertising on national television without adequate standardized disclaimers.

2) To issue writ, orders or direction in the nature of mandamus directing the Respondent No. 4 to take effective steps and issue appropriate guidelines/circulars/notices/rules mandating that disclaimer text cover 80% of the screen, withy voice over read in a slow manner and not speed-read, lasting duration of five whole seconds, against audio-visual advertisements run by crypto-asset exchanges.

3) To issue a writ, orders or direction in the nature of mandamus directing the Respondent No. 5 to issue show cause Notices to the Respondents No. 1-3 and further issue order or direction preventing any future audio-visual advertisement from being run on National Television by Respondents No. 1-3 till the time that Respondent No. 4 issues appropriate guidelines/circulars/notices against crypto-asset exchanges advertisements on National Television in India.

In the current times, when there have been so many cases of cheating in Bitcoins the Petition is much required and it would be interesting to see how the Judges deal with the same. The author will report the final Order when it will be passed.