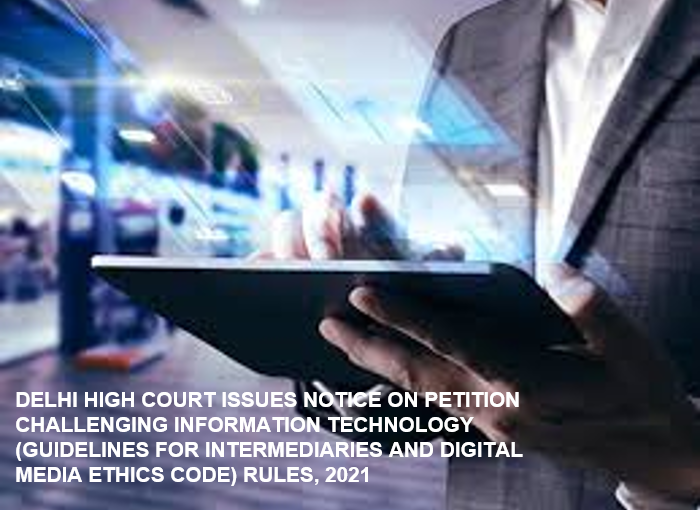 The Bench headed by Chief Justice DN Patel was hearing the Petition which was filed by ‘Foundation for Independent Journalism’, Founder and Editor-in-Chief of ‘The News Minute’ Mr. Dhanya Rajendran and Founding Editor of ‘The Wire’ Mr. MK Venu. The Petition was challenged on the ground of being ultra vires the Act. The Petition challenges the IT Rules, 2021 only in so far as they affect digital news portals, and is not with reference to ‘publishers of online curated content’, i.e., Ove-the-Top (OTT) media platforms or any other entities sought to be regulated by the Impugned Rules.

These Rules set up a classification of ‘publishers of news and current affairs content’ (“Digital News Portals”) as part of ‘digital media’, and seek to regulate these News Portals under Part III of the Impugned Rules by imposing Government oversight and a ‘Code of Ethics’, which stipulates vague conditions such as ‘good taste’, ‘decency’ etc.- matters that are not contemplated under the Act.

These Rules that have been issued in exercise of powers under Section 69A of the Act which allows the Centre to block public access of any information on an intermediary, in the interest of sovereignty and integrity of India, defence of India, security of the State, friendly relations with foreign States or public order or for preventing incitement to the commission of any cognizable offence relating to above.

The Petitioners contended that the Part III of the Impugned Rules that seeks to set up a regulatory mechanism for digital media is arbitrary and ultra vires the Act. They further argued that although the Hon’ble Supreme Court of India had struck down Section 66-A of the Act in the case of Shreya Singhal v. Union of India (2015) 5 SCC 1, the Centre has now brought out these Rules to do indirectly what it cannot do directly.

“The Impugned Rules bring back some elements of Section 66-A and go far beyond it, by way of prescription, to be administered, adjudicated upon and supervised by the Government. Thus, they not only exceed the parent Act, but also contravene the Supreme Court’s ruling in Shreya Singhal, and therefore will not be saved by any general rule-making power under Section 87(1) that is limited to carrying out the provisions of the parent Act.”

The Petitioners submitted that Section 69-A has a limited scope as described by the Apex Court in Shreya Singhal v. Union of India (2015) 5 SCC 1, and the Impugned Rules cannot therefore purport to regulate digital news portals by requiring them to abide by the Code of Ethics.

Once the matter is decided by the Delhi High Court, we will publish a sequel to this Article.