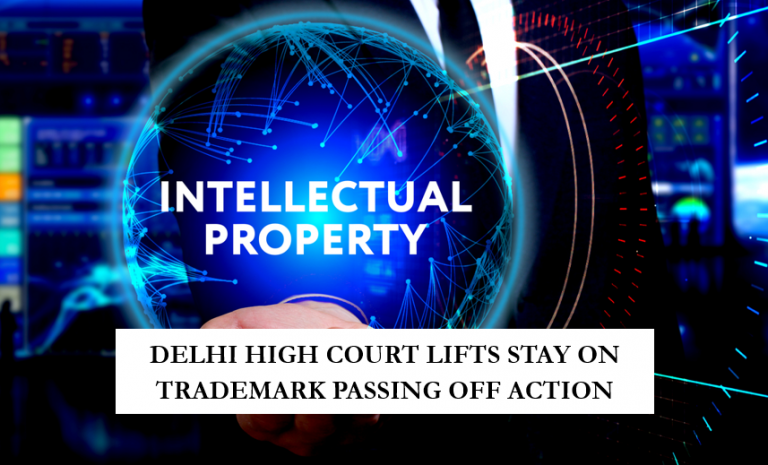 A Single Judge Bench of the Hon’ble High Court of Delhi of Justice Asha Menon passed a Judgment dated 06-08-2021 in the case of Parveen Kumar Gupta v. Ravi Chadha, CM (M) 428 of 2021 and held that when a Rectification Petition is filed before the Intellectual Property Rights Board (IPRB) challenging the validity of the Petitioner’s Trademark, the Suit for Infringement of Trade Mark pending before the Trial Court has to be stayed under Section 124 of the Trade Marks Act, however, an action for passing off could continue.

Section 124: Stay of proceedings where the validity of registration of the trade mark is questioned, etc.—

(1) Where in any suit for infringement of a trade mark—

(a) the defendant pleads that registration of the plaintiff’s trade mark is invalid;

….. the court trying the suit (hereinafter referred to as the court), shall,—

(i) if any proceedings for rectification of the register in relation to the plaintiff’s or defendant’s trade mark are pending before the Registrar or the Appellate Board, stay the suit pending the final disposal of such proceedings;…

Aggrieved, the Petitioner herein filed a Petition under Article 227 of the Constitution of India before the Delhi High Court seeking an order to quash and set aside the Impugned Order dated 06-04-2021 passed by the Trial Court; to allow the Application under Section 5 of the Limitation Act, 1963 filed by the Petitioner and, further allow the Review Petition filed before the Trial Court.

Taking into consideration, the arguments advanced by the Parties to the dispute, the Bench stated “that it is settled law that Section 124 of the Trade Marks Act does not provide for stay of action against the passing off and was applicable only where a rectification application/cancellation has been sought against the registered trade mark that a plaintiff claims to be exclusively its own. This is intended to avoid conflicting decisions by the Civil Courts and the Tribunal. There is no such occasion arising in a suit for passing off. It is only when clever drafting discloses the intent of the plaintiff to get over the statutory bar, being aware of the rectification proceedings commenced against the trade mark that it claims is exclusively its own, as observed in Formica International Ltd. (supra), that the entire suit would have to be stayed till the rectification proceedings are completed. No such plea has been taken in the present case. In fact, such a plea cannot be taken as it is after the institution of the suit that the defendants/respondents have filed an application for rectification.”

Thus, while allowing the Petition under Article 227, the Delhi High Court noted that there is an error apparent on the face of the Impugned Order dated 06-04-2021 of the Trial Court. The Trial Court erred in directing that the entire Suit should be stayed, as it has been consistently held that while the suit for infringement of trade mark has to be stayed under Section 124 of the Trade Marks Act, when a rectification petition is filed before the IPRB, but an action for passing off could continue.