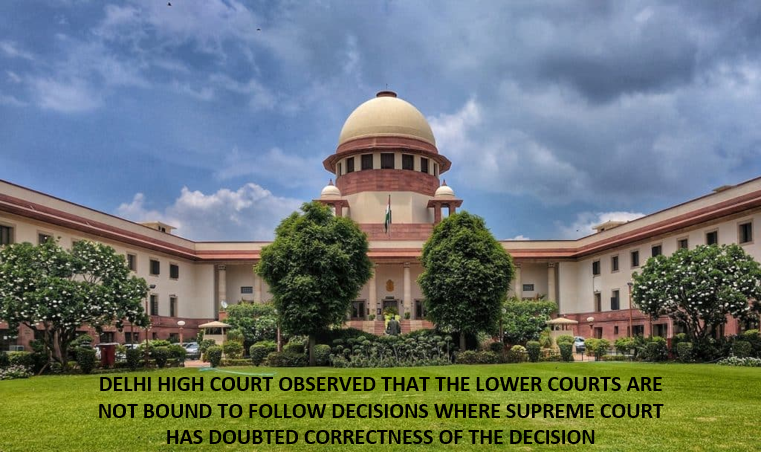 Recently, the Hon’ble #HighCourt of Delhi in the case of Bhagwati Devi Gupta v. Star Infratech (P) Ltd., (2021 SCC Online Del 3995), vide its #Judgment dated 11-08-2021 observed that once a #SupremeCourt Bench has doubted the correctness of an earlier Bench of equal strength and referred the issue to a larger Bench, the #lowercourts may not be bound to follow the earlier decision. However, the Court also clarified that this issue is debatable.

In this case, one Bhagwati Devi Gupta (the “Petitioner”) had filed a petition under Section 11(5) of the Arbitration and Conciliation Act, 1996 (the “Act 1996”), for appointment of an arbitrator to arbitrate on the dispute between the Petitioner and Star Infratech Pvt. Ltd (the “Respondent”). The Respondent raised an objection as to the issue between the Parties that the Agreement between the Parties was inadequately stamped and that till this defect is rectified, the Court cannot refer the dispute to Arbitration under the Act 1996. The Respondent relied on the Judgment of the Supreme Court in the case of N.N. Global Mercantile Pvt. Ltd. v. Indo Unique Flame Ltd. (2021 4 SCC 379), to support its contention.

On the contrary, the Counsel for the Petitioner submitted that the Arbitration Agreement was sufficiently stamped and that, even if it were not, this aspect could be decided by the Arbitrator.

The High Court examined the relevant paragraphs of the Judgment relied upon by the Respondent i.e., N.N. Global Mercantile Pvt. Ltd. (Supra) and observed that the Supreme Court in this case held that the non-payment or technical deficiency on the work order does not invalidate the main contract therefore it is a deficiency that can be cured by paying the requisite stamp duty. Accordingly, the said Judgment defeats the submission of the Respondent.

The following issues were raised before the High Court:

In this view, the High Court observed that the Stamp Act is a fiscal measure enacted to secure revenue for the State on certain classes of instruments: It is not enacted to arm a litigant with a weapon of technicality to meet the case of his opponent. The stringent provisions of the Act are conceived in the interest of the revenue once that object is secured according to law, the party staking his claim on the instrument will not be defeated on the ground of the initial defect in the instrument. Viewed in that light, the scheme is clear. Section 35 of the Stamp Act operates as a bar to an unstamped instrument being admitted in evidence or being acted upon;

With respect to the first issue, the Court held that held that an arbitration agreement is distinct and independent from the underlying substantive commercial contract. It further observed that once the Arbitration Agreement is held to have an independent existence it can be acted upon, irrespective of the alleged invalidity of the commercial contract.

The Court also held that the arbitration agreement would not be rendered invalid, unenforceable or non-existent, even if the substantive contract is not admissible in evidence, or cannot be acted upon on account of non-payment of Stamp Duty.

The Court further observed that it is debatable that once a Bench of the Supreme Court has doubted the correctness of an earlier bench of co-equal strength, and referred the issue to a larger bench, Courts lower in hierarchy should continue to follow the earlier decision.

Thus, the High Court finally referred the Parties are referred to the Delhi International Arbitration Centre (DIAC), which would appoint a suitable arbitrator.