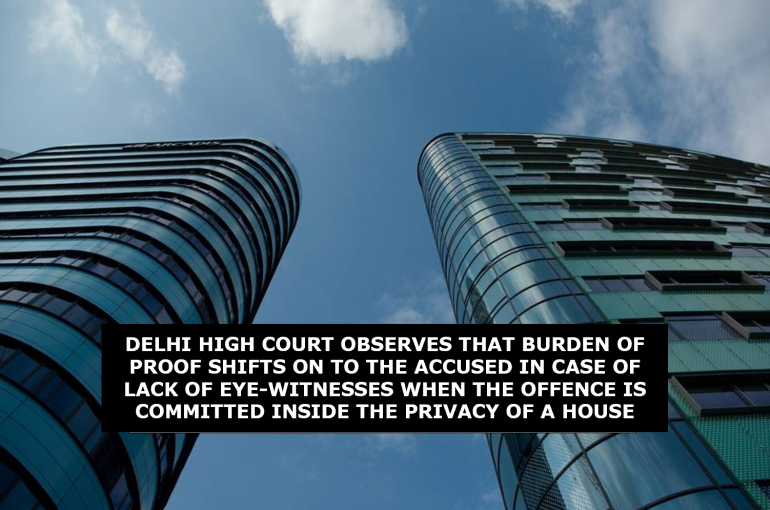 Recently, a two Judge Bench of the Delhi High Court comprising of Justice Mukta Gupta and Justice Poonam A.Bamba, passed a Judgment dated 10.01.2023 in the case titled as Ravinder Solanki v. State, Crl.A. 233/2019 and Smt Suman v. State, Crl.A. 100/2019 and held that when an offence takes place inside the privacy of home where the accused had all the opportunities to plan and commit the offence at that time and in circumstances of their choice, although the initial burden of proof would be on the Prosecution to lead evidence to establish the guilt of the accused, but a corresponding burden of proof would also be on the inmates of the house to establish as to how the offence was committed and on the accused to give reasonable explanation about the incriminating circumstances.

After Preliminary Inquiry, a Notice dated 26.02.2013 was issued to Ravinder, Appellant No. 1 under Section 160 of the Code of Criminal Procedure, 1973 (‘Cr.P.C.’) (Police officer’s power to require attendance of witnesses) and thereafter, he was arrested vide Arrest Memo Ex.PW-22/A and his Disclosure Statement (Ex.PW-22/C) was recorded. On 25.04.2013, one, Suman (‘Appellant No. 2’), who was the Wife of Appellant No. 1-Ravinder, was also arrested vide Arrest Memo Ex.PW-13/A and her Disclosure Statement (Ex.PW-23/L) was recorded. Upon completion of investigation, a Charge-Sheet was filed before the Ld. Trial Court in Delhi and the Appellants were charged with the offence of murder of the Deceased.

The Trial Court, after considering the facts of the case, passed a Judgment dated 29.09.2018 and held the Appellants guilty for committing murder of the Deceased and also directed the Appellants to undergo rigorous imprisonment for life along with a fine of ₹10,000/- each in default and a simple imprisonment for three months for offence punishable under Section 302/34 of IPC vide Order dated 01.10.2018.

Feeling aggrieved and dissatisfied with the Trial Court Judgment dated 29.09.2018 and Order dated 01.10.2018, the Appellants preferred an Appeal before the Delhi High Court.

The Learned Counsel appearing on behalf of the Appellant submitted that the chain of circumstances that pointed towards the guilt of the Appellants was not complete and that the tests of circumstantial evidence were not established by the Prosecution. As per the testimony of Yogendra (‘PW-7’), Father of the Deceased, the knife was recovered from the left side of the drain; however, the testimony of one, Gaurav Chaudhary (‘PW-22’), an Investigating Officer, stated that the knife was recovered from the right side of the drain which shows inconsistencies between the testimonies of witnesses. With regard to the motive, one, Dheeraj (‘PW-23’), an Investigating Officer, deposed that the motive of the alleged offence was a property dispute, however, the same was not substantiated and proved by the Prosecution. Moreover, it was submitted by the Counsel for the Appellants that one, Khushi (‘DW-6’), the Daughter of the Appellants, was one of the most important witnesses as she deposed to have seen PW-7 dragging the Deceased and leaving the Child in front of the bathroom on the first floor of the House. However, the same was not considered by the Trial Court in its Judgment.

The Learned Additional Public Prosecutor for the State contested that as per the testimony of PW-7, the knife was recovered from the left side of the drain and the PW-22 in his testimony stated that the knife was recovered from the right side of the drain, which in itself is minor discrepancy in nature and can occur with the passage of time. As regards the motive, as per the testimony of PW-7, the Appellants were having an evil eye on the property of the PW-7 and by implicating the PW-7 for murder of the Deceased, the Appellants would be able to acquire his property.

The High Court passed a Judgment dated 10.01.2023 and made the following observations in this case:

1) That as per the testimony of PW-7, Yogendra Solanki deposed that the Appellant No.1- Ravinder was his brother who was residing with his wife, Appellant No. 2- Suman and his daughter, DW-6-Khushi on the first floor of House No.D-83, Ashok Mohalla, Maujpur. He stated that in the year 2007, the Appellant No.1 had taken a loan of Rs. 1.2 Lakhs from PW-7 and despite repeated requests, the Appellant No. 1 failed to return the amount to PW-7. On 19.02.2013 PW-7 along with the Deceased were inside their House on the Ground Floor and the main door was bolted from inside. Whereas, the Appellants and their Daughter were in their House on the First Floor. On the next morning, PW-7 was woken up by the Police. He informed the Police that his Son used to go to the First Floor of the House to get ready for his school, when he was informed by the Police that his Son was lying dead on the First Floor in front of the Appellants’ room.

3) That one, Inspector Dheeraj (‘PW-23’) stated that on 19.02.2013 when he reached the spot, the dead body of a boy was lying in front of the room of First Floor in a pool of blood with cut marks on the face and neck of the body of the Deceased. He lifted exhibits from the body of the Deceased and thereafter the body was sent for post-mortem.

4) That SI Gaurav Chaudhary (‘PW-22’) correctly identified Appellant No. 1- Ravinder in the Court and further stated that on 27.02.2013, he reached H.No. D-83, Ashok Mohalla where, at the instance of the Appellant No. 1- Ravinder, he took out one kitchen knife from the nali on the right side after entering the main gate and the same was seized by the Investigating Officer (Ex.PW-7/B).

5) That the Appellant No. 1- Ravinder’s Daughter Khushi deposed that she did not know the date of incident; that it was winter season when she got up to attend nature’s call; that she woke up her Mother, Appellant No. 2 who told her to go to the bathroom. She saw her uncle PW-7- Yogender, dragging the Deceased and leaving him in front of the gate of bathroom. Due to fear she went inside the room and told her Mother about the manner in which her uncle dragged the Deceased. However, as noted above, no blood was found on the Ground Floor. Further, a number of witnesses have found PW-7- Yogender sleeping in drunken condition even when the House was full of Police Officers and neighbors. Thus, the version of Khushi could not be accepted.

6) Further, from the Prosecution evidence, it has been well established that:

ii) Furthermore, as deposed by one, Smt. Gayatri Devi (‘PW-1’), one of the Witnesses has stated that Yogender’s Wife had gone to her parent’s house.

iii) Further, the PW-1 stated that the Deceased used to go upstairs for getting ready in the morning. The dead body of Shaurya was found on the First Floor where Appellant No. 1 and 2 resided with their Daughter, Khushi.

iv)ASI Chhajju Lal (‘PW-24’) stated that when the neighbors and the Police reached after the dead body of the Deceased Shaurya was recovered, PW-7- Yogender was found sleeping in the room on the Ground Floor and at 2 o’ clock when he was taken to the Police Station he was still in a drowsy condition.

7) That the Delhi High Court had relied on Trimukh Maroti Kirkan Vs. State of Maharashtra (2006) 10 SCC 681 where it was held by the Supreme Court as follows:

“Where an offence like murder is committed in secrecy inside a house, the initial burden to establish the case would undoubtedly be upon the prosecution, but the nature and amount of evidence to be led by it to establish the charge cannot be of the same degree as is required in other cases of circumstantial evidence. The burden would be of a comparatively lighter character. In view of Section 106 of the Evidence Act there will be a corresponding burden on the inmates of the house to give a cogent explanation as to how the crime was committed. …..

…In a case based on circumstantial evidence where no eyewitness account is available, there is another principle of law which must be kept in mind. The principle is that when an incriminating circumstance is put to the accused and the said accused either offers no explanation or offers an explanation which is found to be untrue, then the same becomes an additional link in the chain of circumstances to make it complete.

8) Thus, applying the aforesaid principles to the present case, (i) there were no eye-witnesses to the crime and (ii) based on circumstantial evidence, it was already established that the Deceased’s body was found on the First Floor of the House where Appellants No. 1 and 2 were residing with their Daughter, Khushi. (iii) Thus, as per Section 106 of the Indian Evidence Act, 1872 (Burden of proving fact especially within knowledge), the onus was on the Appellants No. 1 and 2 to prove the facts particularly in their knowledge and the allegations that they made against PW-7 that it was in fact PW-7 who allegedly committed murder of his Son and ran away, which they failed to do so. Hence, the allegations made by the Appellants against PW-7 failed.

Thus, based on the aforesaid observations, the Delhi High Court vide Judgment dated 10.01.2023, upheld the conviction of the Appellants No. 1 and 2 and thereby, dismissed their Appeals and confirmed the Ld. Trial Court’s Judgment dated 29.09.2018 and Order of Sentence dated 01.10.2018.