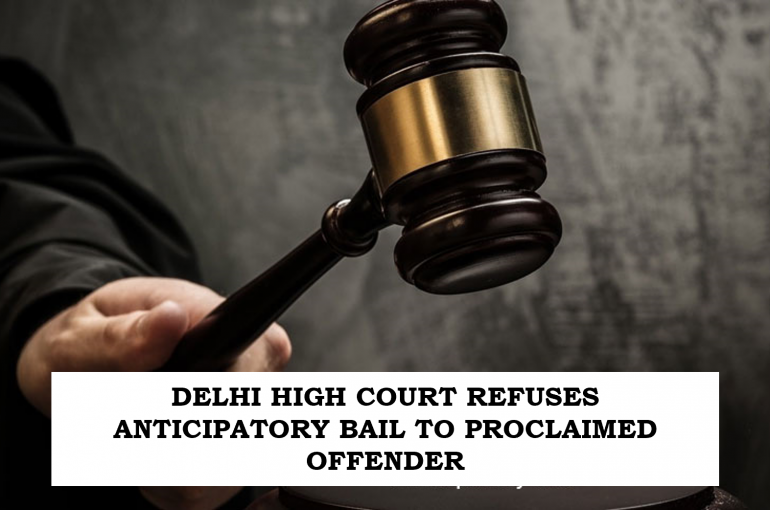 In the matter of Kapil Kumar Vs State, the High Court of Delhi passed a Judgment dated 07-03-2022 and decided upon the grounds for grant of anticipatory bail in cases of economic offences.

In the present case, M/s R.C. Info Systems (R.C. Info) gave development rights of a project measuring 100857 square meters (Project) to M/s AMR Infrastructures Ltd. (AMR) on 31.07.2006. One, Mr. Kapil Kumar (Petitioner)’s father, Mr. Krishan Kumar became one of the Directors of AMR on 04.10.2006 and held 12.5% shareholding in the Company. Thereafter, Mr. Krishan Kumar resigned from the directorship of AMR on 23.03.2015. The Project remained incomplete and soon complaints started pouring in. An FIR No. 173/2015 dated 17.12.2015 was registered at Police Station Economic Offences Wing (EOW) for offences under Sections 409 (Criminal breach of trust by public servant, or by banker, merchant or agent), 420 (Cheating) and 120B of the Indian Penal Code, 1860 (IPC). The FIR named R.C. Info, AMR, Ram Chander Soni, Krishan Kumar, Manoj Gupta, Ashish Gupta, Arun Kumar Soni, Prashant Soni, Naveen Soni, and Brij Mohan Gupta as the Accused. The FIR states that AMR and its Directors deliberately hatched a plan to lure to invest money, which they eventually misused to satisfy personal financial objectives. The Project did not witness any progress and till mid-2009, Rs. 93,12,000/- was already paid by the investors. It states that when the Complainant cross-checked with AMR about the total amount paid, it was found that there was a discrepancy of Rs. 4,37,000/-. On approaching the new directors, the assured return could not be given to the investors, and on asking for a refund of money, it could only be done after 10% deduction from the total paid amount. Subsequently, assured returns were only given from mid-2012 and then stopped in August-September 2014. No possession or assured lease was given to the investors till 2015.

Notice was issued to the Petitioner on 08.11.2016 wherein he was called to join the investigation. Thereafter, Ram Chander Soni and Krishan Kumar were arrested on 03.08.2017, and Ankit Gupta, another Director was also arrested on 24.10.2017. Charge sheet was filed before Ld. Magistrate (Trial Court) on 27.10.2017 against Ram Chander Soni and Krishan Kumar. On 15.11.2017, a Non Bailable Warrant (NBW) was issued against the Accused. On 15.12.2017, as the NBWs remained unexecuted, process under Section 82 Cr.P.C (Proclamation for person absconding) was initiated against the Accused and on 16.03.2018, the Accused were declared Proclaimed Offenders by the Trial Court. Aggrieved by these Orders dated, the Petitioners approached the Delhi High Court. The High Court made the following observations:

The Accused were declared Proclaimed Offenders by Trial Court Order dated 16.03.2018, and as per the settled law of the land, they are not entitled to anticipatory bail.

That the Supreme Court has time and again considered the scope of granting relief under Section 438 Cr.P.C. (Direction for grant of bail to person apprehending arrest.) i.e. a person who has been declared as an absconder or proclaimed offender in terms of Section 82 Cr.P.C., would not be entitled to anticipatory bail. The entirety of Section 82 Cr.P.C. stipulates the manner in which a proclamation can be issued when a person is absconding. Section 82(1) Cr.P.C. states that if any Court has a reason to believe that a person against whom a warrant has been issued is absconding or has concealed himself so as to ensure that the warrant may not be executed, then the Court may publish a written proclamation requiring the person to appear at a specific place and at a specified time not less than 30 days from the date of publishing such proclamation.

Based on the aforesaid observations, the High Court of Delhi held that the Accused are not entitled to anticipatory bail and thus, dismissed the Bail Applications of the Accused.

The Indian Lawyer and Allied Services