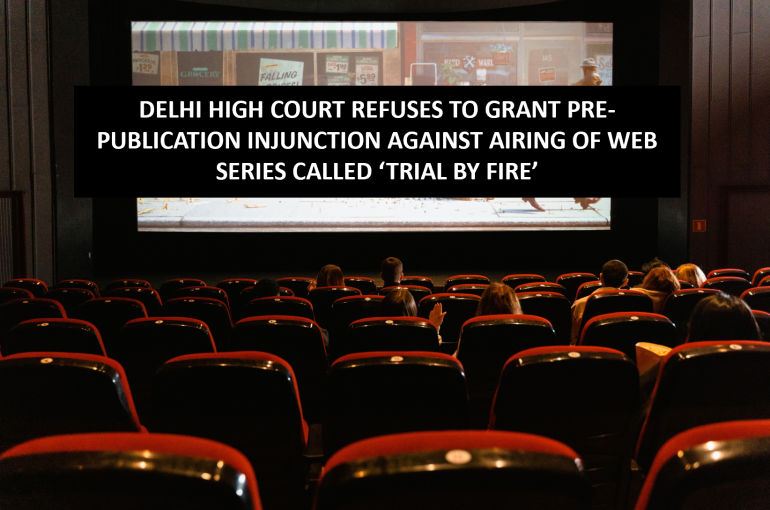 In a recent case of Sushil Ansal vs Endemol India Pvt. Ltd. I.A. 507/2023 in CS(OS) 20/2023 bearing Neutral Citation Number : 2023/DHC/000205, Justice Yashwant Varma of the Hon’ble Delhi High Court passed a Judgment dated 12-01-2023 and held that the Plaintiff was not entitled to a pre-publication injunction against airing of the Web Series called ‘Trial by Fire’.

In the present case, the Plaintiff, Sushil Ansal, filed a Suit and an Application for Ad Interim Injunction restraining the Defendants, Endemol India Pvt. Ltd. from (i) publishing a book named ‘Trial by Fire: The Tragic Tale of Uphaar Fire Tragedy’ including its audio / video adaptations, (ii) exhibiting, broadcasting, telecasting and releasing defamatory, libellous, slanderous and false statements made by way of the Book on its digital / Over-The-Top (OTT) platforms, through the Web Series called ‘Trial by Fire’ to be aired on 13-01-2023.

In an Appeal filed by the Plaintiff before the Delhi High Court, the conviction was upheld but the sentence was reduced to one year and fine Rs. 5000/-, vide Order dated 19-12-2008.

The Supreme Court also upheld the said conviction in a Crl. Appeal No. 597/2010 filed by the Plaintiff and the sentence was increased to two years imprisonment vide Judgment dated 22-09-2015 with an option to pay fine Rs. 30 Crores in lieu of additional one year of imprisonment.

Thereafter, in the tampering of evidence case, the Trial Court vide Judgment dated 08-10-2021 convicted the Plaintiff under Sections 120B IPC (Punishment of criminal conspiracy) read with Section 409 IPC (Criminal breach of trust by public, servant. or by banker, merchant or agent) and Section 201 IPC (Causing disappearance of evidence of offence, or giving false information, to screen offender). The Plaintiff was sentenced to undergo 7 years of imprisonment and was directed to pay fine of Rs. 2.25 Crores.

In an Appeal to the Appellate Court, the imprisonment was reduced to the period of imprisonment already undergone, subject to payment of fine Rs. 3 Crores, vide Order dated 18/19-07-2022. The Plaintiff filed a Revision Petition before the Delhi High Court, which is pending till date.

In the present case, the Plaintiff was aggrieved by the trailer of ‘Trial by Fire’ Web Series that was released on 04-01-2023 and the Web Series that was to be released on 13-01-2023, as it may lead to the lowering of public opinion about the Plaintiff. The said Web Series claimed to be based on the Book authored by the Defendants No. 4 and 5, which had false and libellous statements including allegations that the Plaintiff is a murderer and a killer. The Plaintiff asserted that such false statements would cause loss of reputation, humiliation and irreparable injury to him and further infringe his right to privacy. Further, if the Web Series would be telecasted, it would have a deleterious effect on the outcome of the Revision Petitions that arose out of the evidence tampering case and are still pending in the Delhi High Court.

The High Court passed a Judgment dated 12-01-2023 and made the following observations:

Thus, based on the aforesaid observations, the Delhi High Court passed a Judgment dated 12-01-2023 and held that the Plaintiff is not entitled to the pre-publication injunction at this stage and as a result, the Application for Ad Interim Injunction filed by the Plaintiff was dismissed.