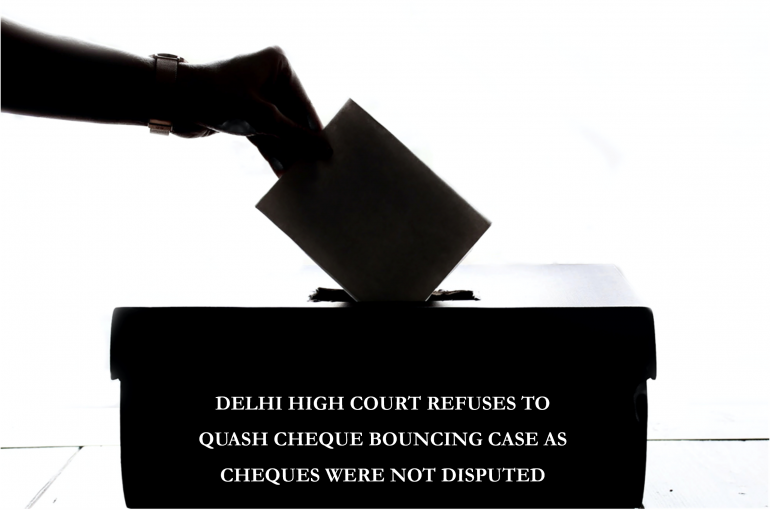 A Single Judge Bench of the Delhi High Court presided by Justice Swarna Kanta Sharma passed a Judgment dated 23.11.2022 in the case of Vishal Arora Versus Yes Bank Limited and other connected matters, CRL.M.C.2359/2022 & CRL.M.A.9965/2022 and observed that presumption under Section 139 Negotiable Instruments Act, 1881 (NI Act) lies in favour of the holder of the cheque when neither the signatures on the cheques nor the liability under them are in dispute.

The Complainant/Respondent Yes Bank Limited (Respondent Bank) is a Company engaged in offering wide range of Banking services to its Clients. Oscar Investments Limited (Accused no. 1) is a public listed Company where Accused no. 2 and 3 are Promoters/Directors. The Accused Company availed a credit facility of Rs.5,65,00,00,000/- from the Respondent Bank, and towards the discharge of liability under the said facility, the Accused Company, through its Authorised Signatories i.e. the Petitioners, had submitted a Declaration along with signed cheques of Rs.200,00,00,000/- and Rs.25,00,00,000/- to the Respondent Bank on 23.12.2016. Thereafter, a Loan Agreement was entered between the Accused Company and Complainant on 17.01.2017. The aforesaid cheques were presented for encashment on 09.01.2020 and the same were dishonored.

Statutory Notice under Section 138 of NI Act was sent by the Complainant calling upon the Accused Company to pay the amount mentioned in the cheques. Upon failure to comply with the said Notice, the Complainant proceeded to file a complaint under Sections 138,141 and 142 of the NI Act against the Accused Company and its Directors and Signatories. After considering the material on record and presummoning evidence, Ld. Trial Court summoned all Accused persons to answer the charge under Section 138 of NI Act. Therefore, the Petitioners filed the petition before the High Court of Delhi under Section 482 of the Criminal Procedure Code, 1973 seeking quashing of the said Complaint and the Summoning Order dated 24.12.2020 passed by Ld. Metropolitan Magistrate, Rouse Avenue Court, New Delhi.

The Hon’ble Delhi High Court observed that the primary dispute in the case pertains to the question as to whether the cheques issued by the Petitioners on behalf of the Accused Company on 23.12.2016 were undated or not, and whether the signatories to the cheques i.e. the Petitioners were a part of the Accused Company at the time of commission of offence or not. After hearing the counsels, the Hon’ble High Court stated that neither the signatures of the Petitioners on the cheques nor the liability for which the cheques were issued was denied. In such a case, the presumption under Section 139 of NI Act would certainly arise in favour of the holder of the cheque i.e., the Respondent Bank/Complainant. While observing the aforesaid, this Hon’ble Court relied on the Judgements in Kalamani Tex & Anr. v. P. Balasubramanian (2021) 5 SCC 283 and Rajeshbhai Muljibhai Patel v. State Of Gujarat (2020) 3 SCC 794.

The Hon’ble Court further observed that the submission made on behalf of the Petitioners that the date on the cheque was not filled by the Petitioners, would also not make much difference to the liability of the drawer. The declaration and undated cheques were issued to the Respondent Bank with an underlying consent that the Bank may use the same as and when required towards the recovery of their dues. Further, reliance was placed on the Judgment in the case of Bir Singh v. Mukesh Kumar, (2019) 4 SCC 197 wherein it was held that: “33. A meaningful reading of the provisions of the Negotiable Instruments Act including, in particular, Sections 20, 87 and 139, makes it amply clear that a person who signs a cheque and makes it over to the payee remains liable unless he adduces evidence to rebut the presumption that the cheque had been issued for payment of a debt or in discharge of a liability. It is immaterial that the cheque may have been filled in by any person other than the drawer, if the cheque is duly signed by the drawer. If the cheque is otherwise valid, the penal provisions of Section 138 would be attracted. 34. If a signed blank cheque is voluntarily presented to a payee towards some payment, the payee may fill up the amount and other particulars. This in itself would not invalidate the cheque. The onus would still be on the Accused to prove that the cheque was not in discharge of a debt or liability by adducing evidence”.

The Hon’ble Delhi High Court while concluding all the preceding discussions reiterated that (i) the amount in dispute is Rupees Two Hundred and Twenty Five Crores of public money, (ii) the Petitioners are the signatories to the cheques which have been dishonoured, (iii) the liability of Accused Company is also not disputed by the Petitioners, (iv) statutory legal notices sent by the Complainant were also addressed to the present Petitioners, and (v) specific averments have been made against the Petitioners in the complaint. Now, at this stage and under such circumstances, if the plea of Petitioners is accepted that since they were not a part of the Accused Company at the time when cheques signed by them were dishonoured, it would in fact, amount to snatching away the right of Respondent Bank to examine the signatories of the cheques before the learned Trial Court. It was further observed that in such a situation, it would be prudent and appropriate to permit the Respondent Bank to lead evidence in support of its claim as dropping the proceedings against both the signatories of the cheques, at the very initial stage, would amount to throttling the trial.

Thus, based on the aforesaid reasoning, the Hon’ble Delhi High Court dismissed the quashing petitions and clarified that the aforesaid observations made by the Court shall not have any bearing on the merits of the case during the trial before the Ld. Metropolitan Magistrate.

Under the law it is presumed that the holder of a cheque, even if it’s a blank cheque, duly signed by the signing party in discharge of a debt, the said cheque when presented would be deemed to be a genuine cheque in discharge of the payer’s debt. Objections regarding the fact that the cheque has been filled by a third party will not mean that the cheque is fraudulent if the party that has filed the case can prove that the said cheques bore genuine signatures. In the above case, such a presumption was drawn in favour of the holder Bank and it is because of this reason that the High Court refused to quash the Complaint and directed the Accused to co operate in the matter and join the proceedings in Court.