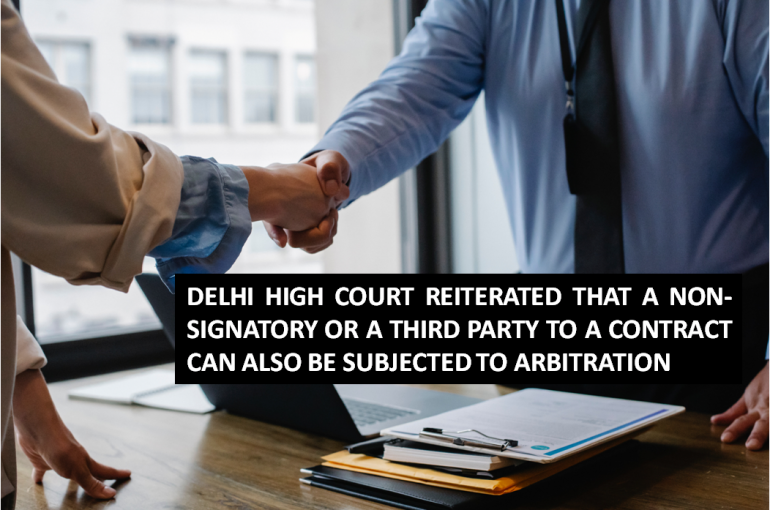 A Single Bench of the Delhi High Court presided by Justice Neena Bansal Krishna passed a Judgment dated 07.10.2022 in Esha Kedia vs Milan R.Parekhi & Ors. in ARB.P No.809 of 2019 and decided upon a Petition filed under Section 11(6) of the Arbitration and Conciliation Act, 1996 seeking appointment of Arbitrator (hereinafter referred to as ‘A&C Act, 1996’).

The High Court while passing the Judgement dated 07.10.2022 made the following observations:

1) The Hon’ble High Court observed that the MoU dated 01.04.12 executed between all the Parties, including the Respondent No. 3, contained no Arbitration Agreement.

The Hon’ble Court observed that the Stamp Paper may have been purchased subsequently but it cannot be denied that at this stage what the Court has to consider, is that prima facie there exists an Arbitration Agreement in writing. The MoU and the Addendum MoU admittedly bear the signatures of the Petitioner and the Respondent Nos. 1 and 2. Any challenge to the genuineness of the said document or any issue of threat and coercion in signing the said documents by Respondent Nos. 1 and 2 cannot be a subject matter of adjudication in the present Petition.

The Hon’ble High Court held that there exists a binding Arbitration Clause in writing between the Petitioner and the Respondent Nos. 1 and 2. Further, no averment of threat and coercion has been pleaded in respect of Addendum MoU dated 16.02.16. The plea that the signatures were obtained by threat and coercion cannot be considered while considering the Application under Section 11 of A&C Act, 1996 for appointment of the Arbitrator.

4) Whether a non-signatory to an Arbitration Agreement be referred to Arbitration?

The Hon’ble Court observed that the courts have evolved the concept of “Group of Companies”:

(i) In this regard, as per the principles of contract law, an agreement entered into by one of the Companies in a group, cannot be binding on the other members of the same group, as each Company is a separate legal entity which has separate legal rights and liabilities. However, in certain exceptional circumstances, an arbitration Agreement can be binding on non-signatories.

(ii) The issue whether a non-signatory can be referred to Arbitration has been exhaustively dealt by the Delhi HC in Shapoorji Pallonji& Co. Pvt. Ltd. v. Rattan India Power Ltd. & Anr., (2021) 281 DLT 246, wherein it was observed that the Courts in different jurisdictions have evolved various principles on the basis of which, in certain exceptional circumstances non-signatories may be compelled to arbitrate.

(v) The Hon’ble Court on the above issue though observed the Group of Companies Doctrine to refer a non-signatory party company to arbitration, but considering that prima facie the Respondent No. 3 is not a party to the Arbitration Agreement even though Respondent No.1 is Managing Director of Respondent No. 3 and signed it in his personal capacity, it is left open for the Parties to move an appropriate application for impleadment of Respondent No. 3, if so advised.

Thus, based on the aforesaid grounds, the High Court allowed the Application for Appointment of Arbitrator and Learned Counsels for the Parties were directed to contact the learned Arbitrator within one week of being communicated a copy of this Order to them by the Registry.