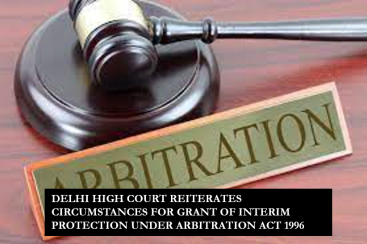 A Single Judge Bench of the Hon’ble #DelhiHighCourt (High Court) comprising of Justice Asha Menon passed a #Judgment dated 06-07-2021 in the case of Navayuga Bengalooru Tollway Pvt Ltd v. National Highways Authority Of India O.M.P. (I) (COMM) 152/2021 and held that the power to issue the directions pertaining to ‘#interimmeasures’ and ‘#protection’ under Section 9 of the #Arbitration and Conciliation Act, 1996 (Act) can only be exercised, if there is no final #adjudication involved and if the matter does not require an interpretation and enforcement of the terms of a #contract.

In the present case, Navayuga Bengalooru Tollway Pvt. Ltd. (NBTPL), (hereinafter Petitioner) was set up as a Special Purpose Vehicle Company under the Companies Act, 1956 having its registered office at Hyderabad, for the purpose of Designing, Engineering, Finance, Construction, Operation and Maintenance of Access controlled highway project namely, the development and the capacity improvement of the existing carriageways from 10000 km to 29500 km, on the Bangalore Nelamangala section of the National Highway No.4 (NH-4) in the State of Karnataka on BOT basis for the respondent/National Highway Authority of India (#NHAI), (hereinafter Respondent).

Pursuant to this, the Respondent invited proposals from bidders under its Request for Proposal (RFP) dated 29-05-2006. The Respondent accepted the bid of the Petitioner and issued a Letter of Acceptance (LOA) dated 01-03-2007. The Concession Agreement (C.A.) dated 09-03-2007 was executed between the parties whereby the Petitioner also furnished Performance Security on 17-03-2007 by submitting a Bank Guarantee for an amount of Rs.22.25 Crores. The Project was completed in December, 2010 and the Petitioner became entitled to collect the tolls which they continued to do till 2020.

Subsequently, a Petition was filed by NBTPL under Section 9 of the Act for seeking the following reliefs:

“(i) Direct the respondent to release and/or deposit the amount of at least the 90% of the total Debt Due amounting to Rs. 395.11 crores in the Escrow Account and/or pay the said amount to the Lenders mentioned above.

(ii) Direct the respondent to pay 90% of the Debt due including 90% of the subordinate Debt amounting to Rs. 693.89 Cr. to Project Lenders and Sub-Debt holders;

Taking into consideration, the arguments advanced by the parties to the dispute, the High Court observed that “Thus, it is evident that directing a party to pay up/deposit an amount finding the opposite party to be so entitled to it on an interpretation of the Clauses of the C.A. without a determination of the same by an Arbitral Tribunal would tantamount to usurping the latter’s jurisdiction. It bears reiteration that the A&C Act does not envisage adjudication in two stages, i.e., summary adjudication by the Court under Section 9 and a final adjudication by the Arbitral Tribunal under Section 6.”

The Single Bench further noted that “disputed questions of fact to be determined on interpretation of the Clauses of the C.A. that would have a bearing on what would be the Termination Payment and what part of it could be Debt Due. This determination falls in the domain of the Arbitral Tribunal and cannot be determined by the court and that too, in an application under Section 9 of the A&C Act.”

Thus, the High Court dismissed the Petition and held that the power to issue the directions pertaining to ‘interim measures’ and ‘protection’ under Section 9 of the Act can only be exercised, if there is no final adjudication involved and on the prima facie view, the matter does not require an interpretation and enforcement of the terms of a Contract.