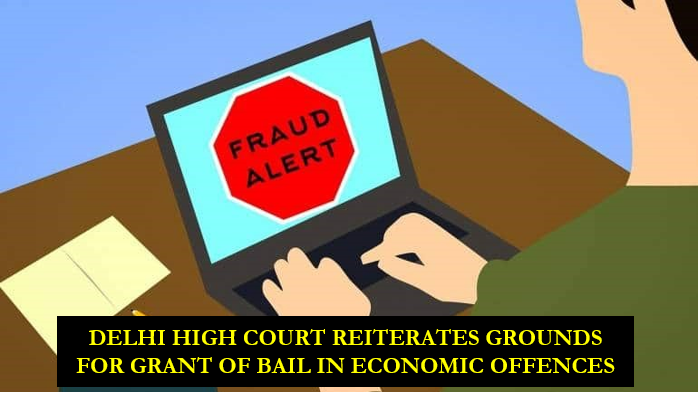 The #DelhiHighCourt has in the matter of Garima Gupta vs State bearing Bail Appln. No.712/2019 and Crl. M.A. 34721/2019 passed a #Judgment dated 01-09-2021 and reiterated the grounds and circumstances for grant of #bail in case of #economicoffences such as #siphoning off #investors’ money in #realestate projects.

In this case, an FIR No. 46/18 dated 13-03-2018 was registered with the Economic Offences Wing (EOW) of Delhi Police, Mandir Marg, New Delhi for the following offences under the Indian Penal Code, 1860 (IPC) committed by M/s MSA Developers Pvt. Ltd., New Delhi (Accused Company) in respect of one, Mrs. Durga Kumari and 30 other complainants whose investments in a real estate project were alleged to have been siphoned off (Complainants / Investors) by the Accused Company.

The Complainants alleged in the FIR that the Accused Company had started accepting bookings / investments from Investors for their real estate project, namely, MSA Circuit Heights (Project), much before they obtained all necessary approvals and licenses from the concerned Authorities for construction of the said Project in Gautam Budh Nagar, Uttar Pradesh. Although, the construction was yet to be started, the Accused Company misled the investors through advertisements and brochures that the said Company had already acquired the requisite land and license to start the Project. The said investments were then fraudulently siphoned off by the Accused Company to different accounts.

During investigation, the Police discovered the following facts:

i) That the sub-lease of the Project land was executed on 22-05-2014 and the Building Plan of the Project was approved on 18-09-2014 by Yamuna Expressway Industrial Development Authority (Authority).

ii) However, the Accused Company had started collecting booking amounts and part payments from the Complainants for the said Project from 24-06-2013 and onwards, when there was no land with the Accused Company and no requisite approvals to start the Project.

iii) Further, the Investors were lured to invest in the Project based on false information, misleading advertisements, dishonest inducement, misrepresentation and concealment of facts by the Directors/Officials of the Accused Company.

v) Hence, the money invested by Investors to the tune of around Rs. 19 Crores was not used by the Accused Company for the Project. In fact, only 10 to 15% of the construction work was done at the Project site.

vi) Furthermore, the Accused Company had indulged in selling / allotting one flat to two different buyers.

vii) In all these malpractices, the Petitioner, Ms. Garima Gupta, Director of MSA Developers Pvt. Ltd. and MSX Pvt. Ltd. and daughter of Mr. Madhav Saran Agarwal (Director of the Accused Company) had played a pivotal role in allotting flats to Investors and siphoning off money for personal and non-Project use.

The Petitioner and her father, Mr. Madhav Saran Agarwal, were arrested on 04-08-2018 and Chargesheet was filed on 25-10-2018. Mrs. Alka Aggarwal was also arrested. The Petitioner was in custody till 03-03-2019 for police investigation, after which she was granted Interim Bail by the Trial Court from 04-03-2019, which has been extended multiple times.

The Petitioner then sought for regular bail by filing Bail Application No. 712 of 2019 before the Delhi High Court on the ground of settlement talks with the aggrieved investors.

As per the Status Report dated 06-04-2019 submitted by the State under the signatures of Assistant Commissioner of Police (ACP), Section V: EOW, Delhi Police, before the Delhi High Court, the siphoned amount of Rs.19 Crores was yet to be recovered and if the Petitioner was released, the same would hamper the ongoing investigation.

Meanwhile, Insolvency Proceedings initiated under Section 7 of the Insolvency and Bankruptcy Code 2016 (IBC) in Ravinder Aggarwal & Ors. Vs. MSA Developers Pvt. Limited, C.P. No. IB-806(PB)/2019 was admitted by the National Company Law Tribunal (NCLT) Delhi and moratorium was thereby declared. Thereafter, construction work had stopped at the Project site.

In the meantime, all other Accused except the Petitioner were granted regular bail.

The Delhi High Court made the following observations in this case in respect of circumstances for grant of regular bail to the Petitioner:

2) That while considering bail applications, the following criteria have to be satisfied:

a) Seriousness of the charge and gravity of offence;

b) Severity of punishment in case of conviction;

c) Reasonable apprehension in tampering with witnesses, if the accused is released on bail;

d) Likelihood of the accused fleeing from justice;

e) Antecedents of the accused to find out past records and his likelihood of committing repeated or new offences, if released on bail;

3) That in this case, the Petitioner has so far not violated any of the terms and conditions of the Interim Bail granted since 04-03-2019.

4) That the Petitioner has not flouted the terms of the Settlement Agreements entered into with the aggrieved Investors.

Hence, the Delhi High Court observed that the Petitioner has made efforts for settlement with the Complainants and has so far not violated the terms of the Interim Protection. Furthermore, the Chargesheet has already been filed and other Accused persons have been released on bail. Hence, the High Court allowed the Bail Application of the Petitioner, subject to her filing a bail bond of Rs. 2 Lakhs with surety and directions that the Petitioner shall not leave the country, etc.