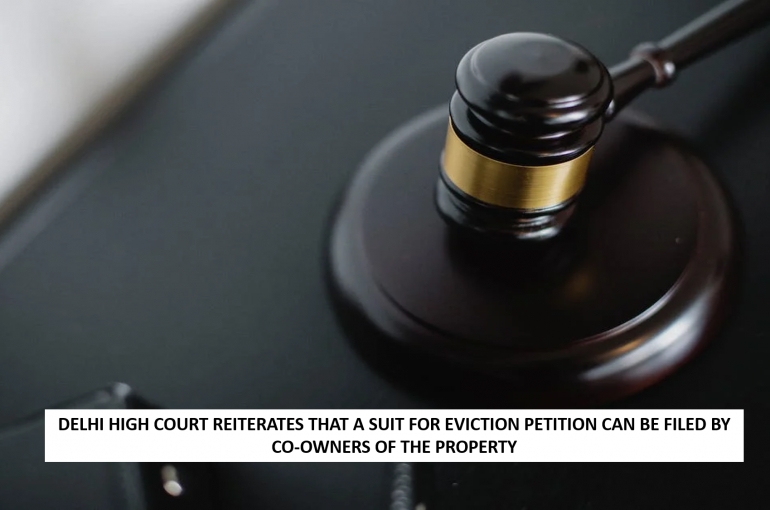 Recently, a single Judge Bench of the Delhi High Court comprising of Justice Sachin Datta passed a Judgment dated 11.01.2023 in DHARAM VEER GOEL vs RENU JAIN & ANR, in RC.REV. 118/2022, and held that that the co-owners of a property can file a suit for eviction of a tenant residing in the said property that belongs to all the owners and co-owners.

An Eviction Petition was filed under Section 25B(4) of the Delhi Rent Control Act (DRC Act) (Special procedure for the disposal of applications for eviction on the ground of bona fide requirement) by the Respondents herein, Smt. Renu Jain and her family members before the Senior Civil Judge-cum-Rent Controller, Rohini Courts, Delhi (District Court) seeking eviction of the Petitioner-Tenant, Shri. Dharam Veer Goel from the Respondents’ Property located in New Delhi (Tenanted Premises). In the said Eviction Petition, it was disclosed that one, Shri. Suresh Chand Jain i.e., the Deceased Husband of the Respondent No.1 and the Deceased Father of the Respondent No.2, had earlier instituted an Eviction Petition on the ground that they were in bonafide need of the said Property. Pursuant to the death of said Shri Suresh Chand Jain, the said earlier Eviction Petition stood abated vide Order dated 14.12.2020.

REASONING AND ANALYSIS OF THE DELHI HIGH COURT

Feeling aggrieved by the aforementioned District Court Order dated 18.12.2021, the Petitioner-Tenant filed a Revision Petition before the Delhi High Court under Section 25(B)(8) of the DRC Act, 1958.

The Delhi High Court further relied on its earlier Judgement passed in Yashpal v. Chamanlal Sachdeva, 129 (2006) DLT 200, wherein it was held that a co-owner can maintain a petition and that the inter se arrangement between owners is not the tenant’s business.

In the present case, the Delhi High Court observed as follows:

Based on the aforesaid observations, the Delhi High Court vide Judgment dated 11.01.2023 upheld the District Court Order dated 18.12.2021, thereby stating that the District Court clearly analysed the said issue and had come to the conclusion that the Respondents-Co-Owners did not have any alternate suitable accommodation available with them and that their need for the Tenanted Premises was genuine. As a result, the Revision Petition filed by the Petitioner-Tenant was dismissed.