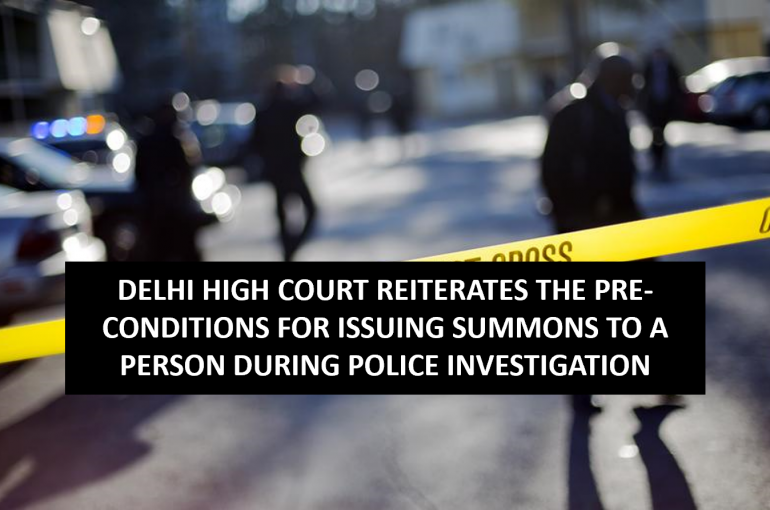 A Single Judge Bench of the Hon’ble Delhi High Court comprising of Justice Chandra Dhari Singh has in a recent case of Kulvinder Singh Kohli vs State of NCT of Delhi and Others W.P.(Crl.) 611/2022 passed a Judgment dated 10-06-2022 and reiterated the pre-essential conditions to be satisfied by the police before issuing summons / notices to any person / witness for police investigation.

In this case, the Petitioner, Mr. Kulvinder Singh Kolhli is an Advocate, residing at J 1/162 E, 2nd Floor, Rajouri Garden, New Delhi – 110027. He had received summons under Section 160 of the Code of Criminal Procedure 1973 (CrPC) (Police officer’s power to require attendance of witnesses) on three occasions to appear personally before the Respondent No. 3, Deputy Captain Police, Cyber Crime, Phase-8, District Sahibzada Ajit Singh (S.A.S.) Nagar, Mohali, Punjab on 28-01-2022, 07-03-2022 and 13-03-2022 (Summons) in connection with a Complaint made by one, Rajbikramdeep Singh and his son Munjanpreet Singh alleging the offences committed by the Petitioner and one, Harvansjit Singh under the following provisions of the Indian Penal Code, 1860 (IPC) and the Information Technology Act, 2000 (IT Act):

i) Section 153A (Promoting enmity between different groups on grounds of religion, race, place of birth, residence. language, etc., and doing acts prejudicial to maintenance of harmony),

ii) Section 295A IPC (Deliberate and malicious acts, intended to outrage religious feelings of any class by insulting its religion or religious beliefs),

iv) Section 504 IPC (Intentional insult with intent to provoke breach of the peace),

vii) Section 67 of the IT Act (Punishment for publishing or transmitting obscene material in electronic form).

Aggrieved, the Petitioner filed W.P.(Crl.) 611/2022 before the Hon’ble Delhi High Court seeking quashing of all three Summons issued by the Respondent No. 3-Police.

The High Court made the following observations in this case:

1) That Section 160 CrPC empowers the Police to require the attendance of any person who may be acquainted with the facts and circumstances of the case which such officer is investigating. Section 160 CrPC is reproduced below for easy reference:

(1) Any police officer making an investigation under this Chapter may, by order in writing, require the attendance before himself of any person being within the limits of his own or any adjoining station who, from the information given or otherwise, appears to be acquainted with the facts and circumstances of the case; and such person shall attend as so required:

Provided that no male person under the age of fifteen years or above the age of sixty-five years or a woman or a mentally or physically disabled person shall be required to attend at any place other than the place in which such male person or woman resides.

(2) The State Government may, by rules made in this behalf, provide for the payment by the police officer of the reasonable expenses of every person, attending under sub-section (1) at any place other than his residence.

2) That Section 160 CrPC clearly provides that the Police may issue a summons/notice to a person following the due process of law, which is as follows:

(b) The Police can exercise such power and require attendance of such person only if he/she is within the limits of his own police station or that of an adjoining station.

3) That in this case, the Police had not registered any FIR against the Petitioner at the stage when the Summons were issued and without registration of FIR, an investigation cannot be said to have been initiated. The Respondent No. 3 had in fact summoned the Petitioner at the stage of preliminary inquiry. Hence, the first criteria for issuing Summons under Section 160 Cr.P.C has not been satisfied by the Police in this case.

4) Further, the Respondent No. 3 from Mohali, Punjab had issued Summons to the Petitioner residing in New Delhi, which is clearly beyond the territorial limits of the concerned Police Station. Thus, the second criteria for issuing Summons under Section 160 Cr.P.C. has also not been satisfied by the Police in this case.

Thus, based on the aforesaid observations, the High Court held that the Summons issued by Respondent No. 3 to Petitioner were without jurisdiction and hence, were set aside. As a result, the Petition was allowed.