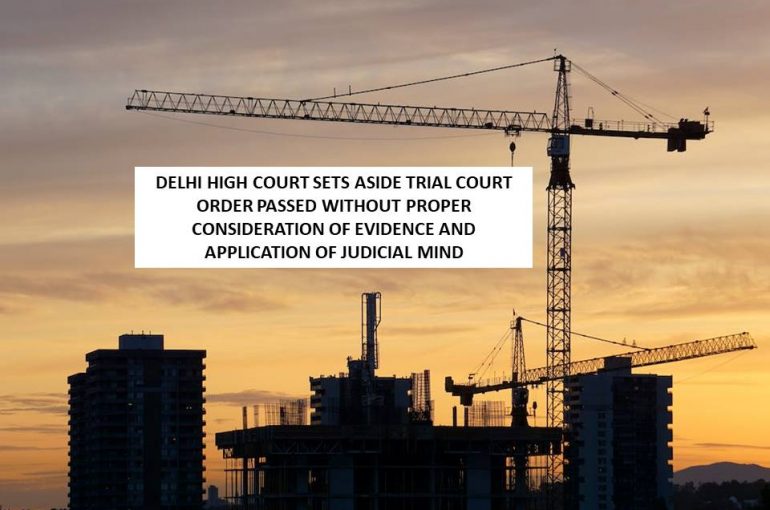 Recently, Justice Amit Sharma of the Delhi High Court, passed a Judgment dated 23.12.2022 in the case titled as SHO, ACB v. Vijay Kataria, Crl.M.C. 2364/2011 and set aside the Order dated 06.07.2011 in CC No. 179/09, titled Vijay Kataria v. SHO Anti-Corruption Branch passed by the Learned Tis Hazari Courts, as the said Ld. Trial Court had not taken into consideration material evidence which was necessary for registering FIR and for directing police investigation under Section 156 of the Code of Criminal Procedure, 1973 (“Cr.P.C.”) (Police officer’s power to investigate cognizable case).

In this case, the Delhi Jal Board (“DJB”) issued a Tender and invited bids for laying clear water transmission mains from Sonia Vihar to various parts of Delhi. M/S Larsen and Toubro (“L&T”) was awarded the said Tender and subsequently, the work was completed in 2004.

One, Vijay Kataria (“Respondent”), on 26.09.2006 lodged a Complaint before the Central Vigilance Commission (“CVC”) and as a result, CVC directed DJB to conduct inquiry. On 09.10.2006, DJB prepared its Report dated 09.10.2006 and concluded that all the allegations made in the Complaint were baseless. The said Report was examined by CVC and vide Order dated 12.02.2008, the Complaint was closed.

The Trial Court vide Order dated 18.05.2009 called for a status report from the Anti-Corruption Branch of the Delhi Police (“Petitioner”). Accordingly, vide Status Report dated 04.09.2009, the Petitioner conducted inquiry on the Complaint and concluded that the allegations made therein were not substantiated.

On 01.05.2010, the Trial Court directed re-investigation into the allegations made by the Respondent and further directed that the Respondent shall render assistance required by the investigating agency to come to a conclusion. As a result, the Petitioner filed another Status Report dated 07.09.2010 and concluded that the allegations made in the Complaint were vague.

Thereafter, the Learned Trial Court on 16.12.2010 again directed further investigation with respect to three specific allegations earlier raised by the Respondent in the Complaint, which are as follows:

ii) That as per the terms of contract WCT tax @ 4% was required to be deducted while only 2% was deducted giving 2& benefit thereby causing loss to the exchequer.

iii) Thirdly and finally the excise exemption was initially deducted and thereby refunded to the contractor which was against the contractor.

The Petitioner filed Status Report dated 10.02.2011, wherein it was concluded that the allegations made with respect to the three aforesaid allegations were also enquired into, but no case was made out.

The Learned Trial Court passed an Order vide dated 06.07.2011 and directed the Station House Officer (‘SHO’) to register an FIR under the relevant provisions of the Indian Penal Code, 1860 (‘IPC’) and the Prevention of Corruption Act, 1988 and investigate the matter expeditiously.

The Government of National Capital Territory of Delhi through the SHO Anti-Corruption Branch filed a Petition before the Delhi High Court seeking setting aside of the Trial Court Order dated 06.07.2011 under Section 482 Cr.P.C (Power of court to quash criminal proceedings) read with Section 483 Cr.P.C (Duty of High Court to exercise continuous superintendence over Courts of Judicial Magistrates).

The Learned Counsel on behalf of the Petitioner contended that the Order dated 06.07.2011 was not sustainable in law, as the Learned Trial Court did not take into consideration the Status Reports dated 04.09.2009, 07.09.2010, and 10.02.2011 which specifically state that the allegations made in the Complaint were baseless and no offence was made out. Further the Learned Trial Court did not record any reasons for disagreeing with the Status Reports on record before directing registration of FIR.

The Learned Counsel on behalf of the Respondent contended that nearly 12 years have elapsed since institution of the original case and the documents related to the case are not easily available anymore and in view thereof, prays that this Court pass any order as it deems fit in the facts and circumstances of the case.

The High Court passed a Judgment dated 23.12.2022 and made the following observations in this case:

Thus in the present case, the High Court vide Judgment dated 23.12.2022, held that for registering FIR and directing investigation under Section 156 (3) of Cr.P.C. the Trial Court ought to have given directions on the merits of the case by applying its judicial mind and by apprising facts and evidence on record, which the Trial Court failed to do so. Hence, the High Court partly allowed the Petition and set aside the Trial Court Order dated 06.07.2011.