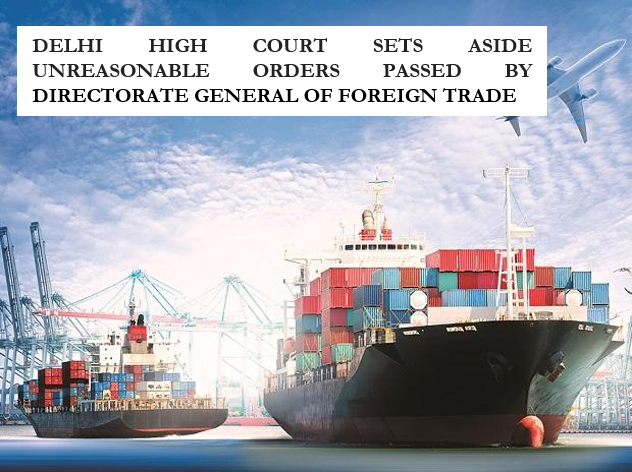 The #DelhiHighCourt has in a recent case of <strong><em>Ericsson India Global Services Private Limited vs Union of India and Others WP (C) 13249 of 2019,</em></strong><em> </em>passed a Judgment dated 27-04-2021 and directed the Respondents to consider the #claims of the Petitioners under Service Exports from India Scheme (#<strong>SEIS</strong>), which were unreasonably rejected by the Respondents.

In this case, the Petitioner has filed various claims for issuance of Duty Credit Scrips under #SEIS Scheme during 2015 to 2018 before the Directorate General of Foreign Trade (#<strong>DGFT</strong>), claiming that it is providing Engineering Services and Management Consulting Services to the #TelecomSector.

However, the Respondent No. 3 rejected all such claims, vide Orders dated 11-06-2019 and 03-06-2019, relying on the Instructions dated 22-05-2019 (<strong>Impugned</strong> <strong>Instructions</strong>) issued by the Respondent No. 4, which stated that <em>all services, whether Engineering Services (Network Engineering Services, Management and Operation of Network Services (Managed Services) in Telecom Sector or Management Consulting Services) <u>in Telecom Sector, are ineligible for the benefit under the Service Exports from India Scheme (hereinafter referred to as ‘<strong>SEIS’</strong>)</u> announced by the Foreign Trade Policy 2015-20.</em>

Hence, the Petitioner filed a Writ Petition before the Hon’ble Delhi High Court and challenged the said Impugned Instructions and the Orders dated 11-06-2019 and 03-06-2019 passed by the Respondent No. 3, on the ground that DGFT has issued Impugned Instructions in contrary to the Foreign Trade Policy 2015-20 (<strong>Policy</strong>). The Policy declares <u>service providers in the telecom sector</u> ineligible to claim benefits under SEIS Scheme. However, DGFT has interpreted such exclusion to cover persons who provide <u>services to the telecom sector</u> as well and thus, passed the Impugned Instructions to declare the Petitioners ineligible to claim benefits under SEIS.

<strong>1)</strong> That the Supreme Court has in previous matters held that only the Central Government has the power to amend the Policy, whereas, DGFT has the power to issue only clarifications in case of any ambiguity with respect to the Policy and not amend the same by way of issue of instructions/ circulars or by introducing new conditions and criteria. Further, in case of any inconsistency between such circular/public notice and the Policy, then such circular/public notice would be set aside.

<strong>3)</strong> The objective of SEIS is to <em>encourage export of notified Services from India</em>. Under SEIS, duty credit scrips are granted as rewards to service providers of eligible services on the net foreign exchange earned by them. However, Chapter 3 of the Policy has excluded certain category of service providers from claiming benefits under SEIS, i.e. service providers in the Telecom Sector, are considered ineligible for the purpose of calculation of entitlement under SEIS.

<strong>4)</strong> That DGFT has further interpreted such exclusion to cover persons who provide <u>services to the Telecom Sector</u> as well and thus, passed the Impugned Instructions, whereby, the Petitioner has been declared ineligible to claim benefits under SEIS.

<strong>6)</strong> Thus, the Impugned Instructions sought to impose fresh restrictions on eligibility of service providers entitled to claim benefits under SEIS, which amounts to amendment of Policy by DGFT and such act is <em>ultra vires </em>of the Policy.