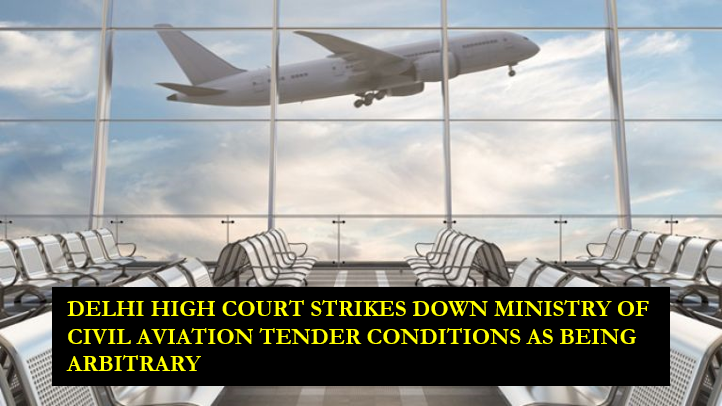 A Two Judge Bench of J. Vipin Sanghi and J. Rekha Palli of the Hon’ble #DelhiHighCourt has passed a #Judgment dated 14-07-2021 in Centre for Aviation Policy, Safety and Research CAPSR vs Union of India & Ors, where the High Court struck down a #Tender/Request for Proposal issued by the #MinistryofCivilAviation inviting #proposals from #groundhandlingservice providers, for being #unreasonable and #arbitrary.

In this case, the Ministry of Civil Aviation, the Respondent No. 2 issued two Requests for Proposal, vide Tender ID 2020_AAI_54002_1 dated 15-04-2020 and Tender ID 2020_AAI_46811_1 dated 28-07-2020 (Tenders) for engaging agencies to provide Ground Handling Services at Groups C and D airports respectively. The Tenders broadly stipulated the following technical and financial eligibility criteria for the bidders:

a) That the bidder has to self-certify that in the past 7 years, it had successfully managed to attain 36 months’ of experience in providing 3 out of the 7 Core GHS, which include aircraft handling, aircraft servicing, loading and unloading, cargo handling, terminal services, flight operations and service transport, etc.

c) The bidders must also furnish an earnest money deposit (EMD) of INR 35 Lakh in favour of the Respondent No. 2, in respect of each region that they were bidding for.

However, the Centre for Aviation Policy, Safety and Research (CAPSR), i.e. the Petitioner considered such terms to be unreasonably restrictive and anti-competitive. The Petitioner in this case is a non-profit organization registered in 2012 that carries out independent research, advisory and advocacy in the field of civil aviation. It comprises of firms and entities providing services in the aviation sector, including the micro, small and medium enterprises (MSMEs) providing GHS services across the airports in the country.

Aggrieved by the terms of the Tenders, the Petitioner, filed a Writ Petition under Article 226 of the Constitution before the Delhi High Court seeking quashing of the Requests for Proposal, on the ground that the eligibility criteria set by the Respondent No. 2 for grant of concession for providing ground handling services, stipulate such technical and financial qualifications that do not correlate with ground handling services to be provided at Groups C and D airports. Hence, such Requests for Proposal render the existing ground handling agencies at smaller airports ineligible to participate in the tender process. The Petitioner further argued that the Respondent No. 2 has arbitrarily issued such Tenders to oust the existing ground handling services (hereinafter referred to as ‘GHS’) agencies from serving at smaller airports.

1) That the Respondent No. 2 has categorised airports as follows:

i) ‘Group A’ comprises of 4 airports situated in metropolitan cities,

iii) ‘Group C’ comprises of 15 airports situated in other remaining larger cities of a State and,

However, the Tenders issued by the Respondent No. 2 were only pertaining to Groups C and D airports.

2) That the Tenders were pertaining to ground handling services. As per Clause 2 (b) of the Airports Authority of India (Ground Handling Services) Regulations, 2018, ground handling services means services necessary for an aircraft’s arrival at an airport and departure from an airport other than air traffic control and it includes ramp handling, traffic handling and other such activities prescribed by the Central Government.

4) However, the Tenders/Requests for Proposal have gone ahead and drawn the distinction between GHS provided to a scheduled airline and to a non-scheduled airline. Hence, such differentiation is not backed by any law.

5) Further, this differentiation made the potential small-time bidders, who had been providing GHS to airports for the past several years, ineligible to bid for the Tender, despite having past experience.

Thus, the Delhi High Court held that the Respondents disregarded material considerations at the time of framing the technical conditions in the Tenders. The Respondents ought to have been mindful about the Atmanirbhar Bharat goals and the protection and promotion of MSMEs, while drafting the executive orders. Therefore, the Delhi High Court struck down the Tender/Request for Proposal in respect of Group D Airports for being offensive and also struck down the revised minimum Annual Turnover criteria of INR 18 Crore for being discriminatory and arbitrary.