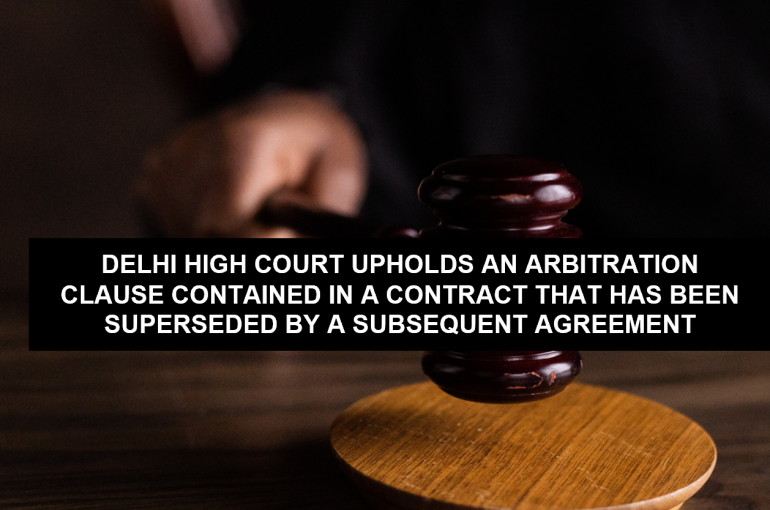 Recently, Justice Mini Pushkarna of the Delhi High Court passed a Judgment dated 23.11.2022 in PVR Limited V. Imperia Wishfield Private Limited. in Arbitration Petition No. 829/2022, and reiterated that an arbitration clause contained in a contract would survive even though the contract is terminated or superseded by a subsequent agreement.

A Memorandum of Understanding (MOU) dated 06.05.2016 was executed between the Parties for entering into an arrangement for operating a multiplex:

Accordingly, subsequent to the execution of the MOU, a tripartite Agreement to Lease was executed on 18.01.2017 between the Petitioner, the Respondent and Prime IT Solutions Pvt. Ltd. (which was the Confirming Party):

b) In case, any dispute arose between the Parties, the same would be settled through Arbitration contained in Clause 14 of the Agreement to Lease.

c) In this case, the Respondent failed to perform its part of the obligations as envisaged under the Agreement to Lease.

d) Due to non-performance of obligations by the Respondent, a Mutual Recession and Release Deed dated 23.08.2019 was executed and the MOU and the Agreement to Lease were brought to an end.

g) The Respondent was supposed to refund the said amount towards Security Deposit to the Petitioner within a period of 1 month from the date of execution of the Release Deed i.e. till 23.09.2019. However, the Respondent failed to do so.

As no reply was received from the Respondent, the Petitioner filed a Petition under Section 11 (6) of the Arbitration and Conciliation Act, 1996 (Act) seeking appointment of an arbitrator before the Delhi High Court.

The High Court vide Judgement dated 23.11.2022 made the following observations:

1) That pertaining to the issue that whether the rights of the Parties under the MOU and the Agreement to Lease in the present case, have been superseded by a subsequent agreement i.e. the Release Deed, is an arbitrable issue which can be examined by the Arbitrator, as an Arbitral Tribunal is competent to rule on its own jurisdiction, including the existence or validity of the Arbitration Agreement, and as such the said issue cannot be adjudicated at the time of considering a Section 11 Petition filed before the High Court.

2) That in respect of the other issue whether the Arbitration Clause contained in the MoU and the Lease Agreement would survive if the latter is terminated or superseded by a subsequent agreement i.e. the Release Deed, the High Court observed that:

Thus, based on the aforesaid observations, the Delhi High Court allowed the Section 11 Petition and appointed a Sole Arbitrator in this case to adjudicate the disputes between the Parties in accordance with the provisions of the Act.