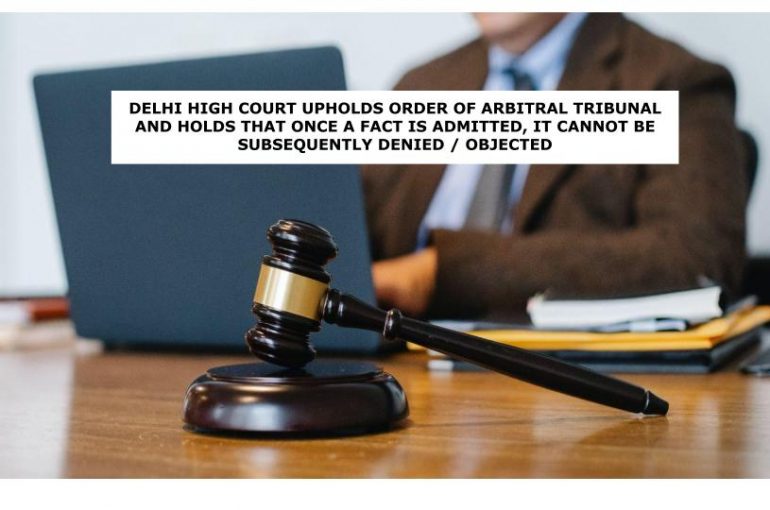 DELHI HIGH COURT UPHOLDS ORDER OF ARBITRAL TRIBUNAL AND HOLDS THAT ONCE A FACT IS ADMITTED, IT CANNOT BE SUBSEQUENTLY DENIED / OBJECTED

Recently, a two Judge Bench of the Delhi High Court comprising of Justice Amit Mahajan and Justice Vibhu Bakhru passed a Judgment dated 07-10-2022 in SNG Developers Limited Vs. Vardhman Buildtech Private Limited FAO (OS) (Comm) 47/2022 & CM Appl. 9305/2022 & CM Appl. 9306/2022, and upheld the Arbitral Tribunal Order dated 1.11.2011 regarding validity of the Agreement executed by the Parties and held that once a fact is admitted, it cannot be subsequently denied / objected. Hence, the High Court did not find that there was any requirement to intervene under Section 34 (Application for setting aside arbitral awards) of the Arbitration And Conciliation Act, 1996 (Act).

The Learned Single Judge while exercising the power under Section 34 of the Act, passed a Judgment dated 09.12.2021 that confirms the Arbitrator Tribunal Order in dismissing the challenge raised to the Interim Award dated 01.11.2021. Aggrieved by the said decision of Learned Single Judge, the Appellant has filed the present Appeal in the Delhi High Court under Section 37 (Appealable orders) of the Act.

SNG Developers Limited (Appellant) and Vardhman Buildtech Private Limited (Respondent) entered into a Collaboration Agreement dated 16.03.2010 for the development of Appellant’s Land. The consideration amount for the said transaction was Rs. 6.5 Crores at the time of execution and subject-matter (Land) was situated at P-8, Greater Noida, District Gautam-Budh Nagar (U.P.).

The Appellant filed Statement of Defense where the fact of execution of the Agreement dated 04.04.2011 was admitted and the above-mentioned claims were denied. The Appellant took various grounds inter alia expiry of the prescribed period as per the Limitation Act, 1963, failure to perform Agreement and negligence by the Respondent, etc.  However, it is important to note that the Appellant neither raised nor objected about the insufficient stamping of Agreement.

After consulting with the Parties and their respective Counsels, the Arbitral Tribunal fixed a schedule and the procedure for Arbitral Proceedings and thereby passed certain directions with their consent vide Order dated 09.05.2019.

After considering the aforesaid contention, the Arbitral Tribunal relied upon Shyamal Kumar Roy Vs. Sushil Kumar Agarwal: (2006) 11 SCC 331 and rejected the late objection vide Order dated 01.11.2011. Later, the Appellant challenged validity of Order dated 01.11.2011 before Single Judge Bench.  Agreeing with the reasoning of Arbitral Tribunal, the learned Single Judge dismissed the objection vide Order dated 09.12.2021 which was filed under Section 34 (Application for setting aside arbitral awards) of the Arbitration Act.

2) Section 19 (Determination of rules of procedure) of the Arbitration Act, enables the parties to mutually decide procedure as well as issues. Accordingly, the Arbitral Tribunal after taking consent from both parties determined rules of procedure and framed issues which were passed vide Order dated 09.05.2019. There was no objection raised by the Appellant to the execution or to the admissibility of the said Agreement in evidence. It is part of procedure which was agreed between Parties that in the absence of denial in the affidavit of admission / denial, they will not raise the objection of such document being read in evidence, hence they are estopped from doing so at the belated stage. Thus, objection cannot be allowed to be raised in relation to the admission / denial of the document and its effect, as Parties had already consented for the same.

3) Section 35 (Instruments not duly stamped inadmissible in evidence, etc.) of the Indian Stamp Act, 1899 provides general rule regarding admissibility of chargeable instrument as evidence. As per the said Act, for considering chargeable instrument as evidence it must be stamped, otherwise it won’t be admissible. However, Section 36 (Admission of instrument where not to be questioned) of the Indian Stamp Act, 1899 provides exception where the instrument cannot be called in question even if not duly stamped. As it is clear from the facts of case that the Agreement was admitted when that affidavit of admission / denial was filed. The case was listed for cross examination of the respondent’s witness, who had already filed the affidavit by way of evidence. The procedure agreed to between the parties specifically states that the document once not denied in admission / denial, would be read in evidence dispensing with the need of formal proof.

Thus, based on the aforesaid observations, the High Court in the present case, held that it is an admitted fact that the genuineness of the Agreement is not in question and, in fact, even the Appellant is relying upon the contents of the said Agreement. Thus, the interpretation given by the Arbitral Tribunal was correct and the High Court does not find any requirement for any interference while exercising power under Section 34 of the Arbitration Act. Therefore, the present Appeal was dismissed with costs.