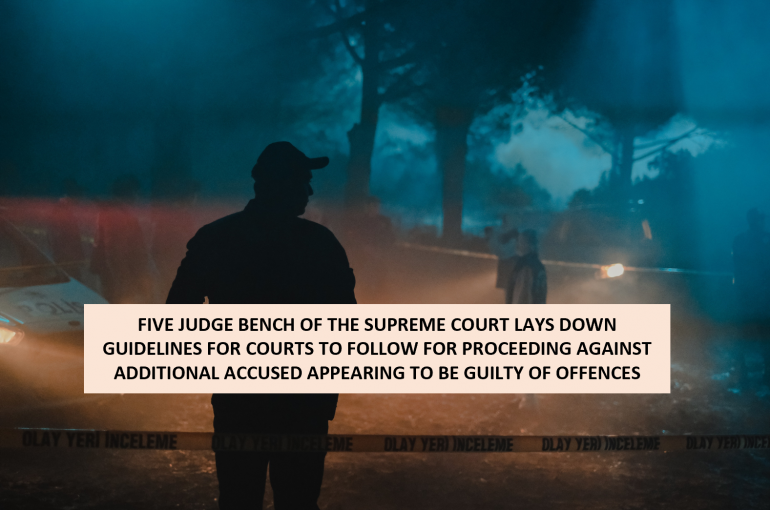 Recently, a five Judge Constitution Bench of the Supreme Court comprising of Justice S. Abdul Nazeer, Justice B.R. Gavai, Justice A.S. Bopanna, Justice V. Ramasubramanian and Justice B.V. Nagarathna passed a Judgment dated 05-12-2022 in the matter of Sukhpal Singh Khaira vs The State of Punjab, Criminal Appeal No. 885 of 2019 and reiterated certain Guidelines that a competent court has to follow while exercising power under Section 319 of the Code of Criminal Procedure 1973 (CrPC) (Power to proceed against other persons appearing to be guilty of offence).

In the present case, a First Information Report (FIR) No. 35 dated 05-03-2015 was lodged against 11 Accused persons in the Police Station Sadar, Jalalabad for various offences committed under the following provisions of law:

c) Section 25 (Punishment for allowing premises, etc., to be used for commission of an offence)

Section 25 (1A) (Punishment for certain offences)

Thereafter, the Police filed a Charge Sheet dated 06-09-2015 before the Trial Court in respect of 10 Accused, who were summoned and put to trial in Sessions Case No. 289 of 2015. The Police also filed a Supplementary Chargesheet dated 18-11-2016 against two other Proclaimed Offenders who could not be apprehended by the Police.

2) The High Court vide Order dated 17-11-2017 dismissed the Criminal Revision Petitions and upheld the Trial Court Summoning Order dated 31-10-2017 on the ground that the power under Section 319 CrPC to summon additional accused can be exercised even after the judgment is concluded, so that the additional accused is also put to trial like the other accused persons. Section 319 CrPC is reproduced below for easy reference:

(1) Where, in the course of any inquiry into, or trial of, an offence, it appears from the evidence that any person not being the accused has committed any offence for which such person could be tried together with the accused, the Court may proceed against such person for the offence which he appears to have committed.

(2) Where such person is not attending the Court, he may be arrested or summoned, as the circumstances of the case may require, for the purpose aforesaid.

(3) Any person attending the Court, although not under arrest or upon a summons, may be detained by such Court for the purpose of the inquiry into, or trial of, the offence which he appears to have committed.

(4) Where the Court proceeds against any person under sub-section (1), then—

(a) the proceedings in respect of such person shall be commenced afresh, and the witnesses re-heard;

(b) subject to the provisions of clause (a), the case may proceed as if such person had been an accused person when the Court took cognizance of the offence upon which the inquiry or trial was commenced.

Aggrieved by the High Court Order dated 17-11-2017, the Appellant filed Appeal before the Supreme Court and the Apex Court, vide Judgment dated 05-12-2022, made the following observations:

(1) That the Trial Court may exercise its powers under Section 319 CrPC to summon and try an additional accused as follows:

iii) The power under Section 319 CrPC may be exercised by the Trial Court based on the evidence adduced before the Court that points towards an additional accused person, who seems to have committed the offence, but was excluded from the chargesheet; such additional accused can later be summoned under Section 319 CrPC and be tried together with the other accused persons who are being tried before the Court or be tried separately.

iv) Thus, putting together the observations made by the Supreme Court hereinabove, if the Court has to exercise its powers under Section 319 CrPC to summon the additional accused person and to conduct a joint / separate trial of the additional accused with the other accused persons against whom the trial is proceeding, such powers have to be exercised by the Trial Court before the trial is concluded in respect of the other accused persons and a trial is deemed to have been concluded (a) either upon acquittal of the accused or (b) upon imposition of sentence in case the accused is convicted.

Therefore, based on the aforesaid observations, the Apex Court held that an order under Section 319 CrPC can be passed by a Trial Court (a) to summon an additional accused and to conduct a joint / separate trial of the additional accused with the other accused persons, if evidence is found against him regarding his involvement in the offence and (b) such order can be passed at any time before the trial is concluded i.e. before the judgment of conviction and sentence is pronounced against the other accused persons.

The detailed Guidelines laid down by the Constitution Bench of the Supreme Court that a competent Court has to follow while exercising powers under Section 319 CrPC, vide Judgment dated 05-12-2022 is attached in the link below:

Accordingly, the Constitution Bench directed the Registry to obtain orders from the Hon’ble Chief Justice of India and place the matter before the appropriate Bench to take a decision on the factual aspects of the case based on the aforesaid observations of law and interpretation of Section 319 CrPC.