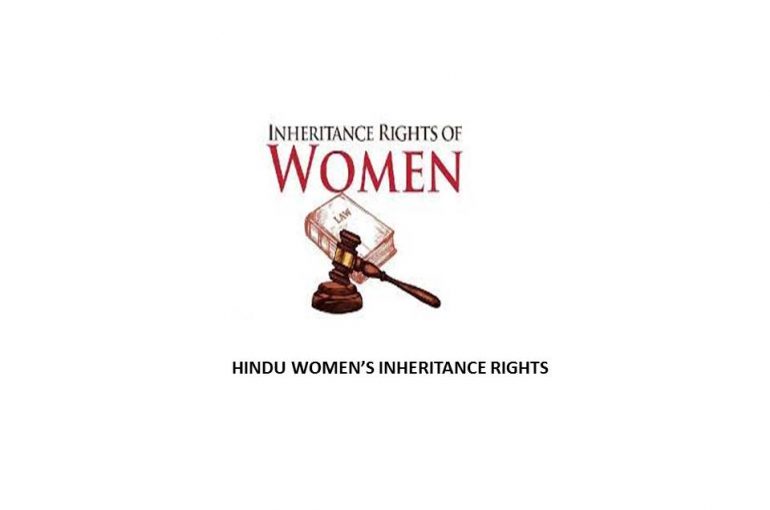 Property is the fulcrum for women in a patriarchal society. It empowers women to make a choice about livelihood, provides security against poverty and advocates autonomy. But in the effort to upkeep the virtues of Indian womanhood, women’s sacrifice of rights in property has been always applauded. Women tend to let go off their Property Rights in ancestral homes so that they can have comfortable access to their paternal relationships. For ages, Hindu women as daughters, mothers, and wives have been facing economic discrimination within the hierarchical, unequal, and autocratic families. Owning immovable property or a piece of land or controlling economic assets, is a distant dream for the majority of women. It is ubiquitous. However, the Hindu Succession Act 1956 was a classic case of “Fractional Justice” since the Mitakshara coparcenary, whose membership was confined only to males, was retained.

Before the Hindu Succession Act, 1956, the shastric and customary laws that varied from region to region, governed the Hindus and sometimes it varied on a caste basis. This led to diversity in the law. So, various schools were founded on different interpretations of Smritis for matters relating to succession such as Mitakshara and Dayabhaga School. The Hindu Law of Inheritance Act, 1929 was another piece of Legislation that brought woman into the scheme of inheritance. This Legislation imposed the rights of inheritance on three female heirs such as son’s daughter, daughter’s daughter, and sister, a limited restriction on the survivorship rule. The Hindu Succession Act, 1956 is an Act of the Parliament of India that was enacted to amend and codify the Law on Intestate or Unwilled Succession amongst Hindus, Buddhists, Jains, and Sikhs i.e., the Act deals only with intestate succession. Section 6 of Hindu Succession Act, (before the 2005 Amendment) elucidated “Devolution of interest in Coparcenary Property- When a Hindu male dies after the commencement of this Act, having at the time of his death an interest in a Mitakshara Coparcenary Property, his interest in the property shall devolve by survivorship upon the surviving members of the coparcenary and not in accordance with this Act.” The Hindu Succession (Amendment) Act 2005 addressed various gender inequalities in the previous Act and gave equal rights to daughters in Hindu Mitakshara Coparcenary Property.

Changes after the 2005 Amendment

Ten years later, the three contradicting Judgments, which were considered authoritative precedents, failed to provide an expansive interpretation of Section 6 of the Hindu Succession Act, 2005. In Prakash v. Phulavati (2016) 2 SCC 36, the Supreme Court held that the rights under the 2005 Amendment Act apply to living daughters of living coparceners as on September 9, 2005, irrespective of when such daughters are born. In February 2018, in Danama v. Amar (2018) 3 SCC 343, the Apex Court provided some relief but remained opaque on many counts. The Supreme Court held that a daughter, living or dead, as on the date of the Amendment, shall be entitled to a share in her father’s property. The implication was that even if the daughter was not alive on the date of the Amendment, her children could claim their rightful share. The Apex Court approved that as coparceners, both sons and daughters had the same rights. The Judgment was ambiguous on whether a father should also be living on the date of the Amendment for the daughters to be eligible for their inheritance rights. In the Appeal under analysis in Vineeta Sharma v. Rakesh Sharma & Others (2020) 9 SCC 1, similar questions were raised before the Hon’ble Supreme Court, and considering the contradicting view expressed by the Apex Court in the above mentioned two decisions, i.e., Phulavati (supra) and Danamma (supra), the issue was referred to a larger Bench constituting three Judges of the Supreme Court. Issues before the Apex Court in this case are as follows:

The remarkable and progressive Judgement of the Supreme Court is much appreciated but in the written law, there is no guarantee to end discrimination. The Constitution of India that has been adopted almost 70 years back, promises equality and social justice, but in reality, and on grounds, these goals have not yet been achieved. Vesting women with economic entitlements through law strengthens the overall situation of women and may alter the rigid social norms and perception, while recognizing their claims to the property ownership and control of resources. In order to practically ensure that women could avail their rights, it is essential to sensitize the legal and bureaucratic machinery towards the intent of such amendments in the law.