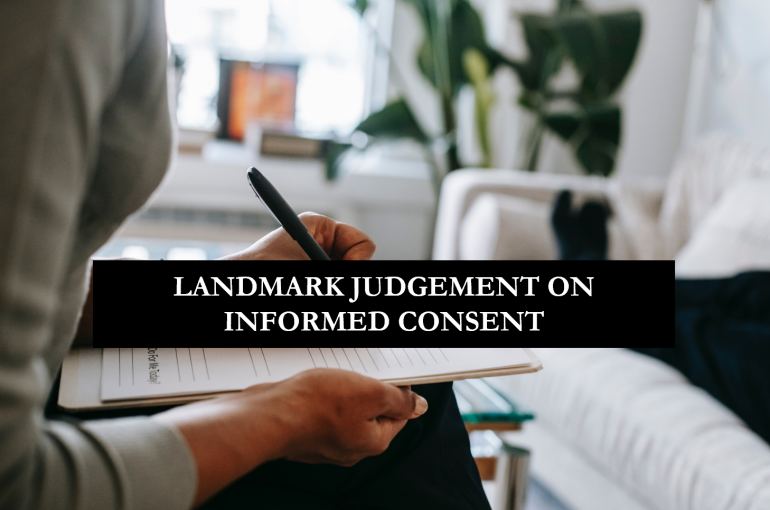 A Special Bench of the Supreme Court presided by Justice B. N. Agarwal, Justice P. P. Naolekar and Justice R. V. Raveendran passed a Judgment dated 16.01.20208 in the case of Samira Kohli Versus Dr. Prabha Manchanda & Anr., Appeal (Civil) 1949 of 2004 and decided upon the issue of informed consent in the case of medical negligence and laid down the guiding principles for the same.

The Appellant, Samira Kohli, an unmarried woman aged 44 years, visited the clinic of Dr. Prabha Manchanda (Respondent No.1) complaining of prolonged menstrual bleeding for nine days. The Respondent No.1 examined and advised her to undergo an ultrasound test on the same day. After examining the report, the Respondent No.1 had a discussion with the Appellant and advised her to come on the next day for a laparoscopy test under general anesthesia, for making an affirmative diagnosis. Subsequently, the Appellant visited the Clinic on 10.05.1995, for the test as advised and gave her signatures on the Admission and Discharge Card which read “for diagnostic and operative laparoscopy on 10.5.1995”, the consent form for hospital admission and medical treatment, and the consent form for surgery which stated that the Appellant was to undergo “diagnostic and operative laparoscopy.”

Aggrieved by the aforesaid procedure, the Appellant lodged a complaint before the National Consumer Disputes Redressal Commission (Commission) claiming compensation of Rs. 25 lakhs alleging that the Respondent No.1 had been negligent in treating her by performing Hysterectomy and Bilateral Salpingo-Oopherectomy without her consent. The Commission dismissed the complaint by an Order dated 19.11.2003, therefore, the Appellant filed an appeal before the Supreme Court.

The Hon’ble Supreme Court at first discussed the law on consent in length and relied upon the Bolam Test which was first laid down in Bolam v. Friern Hospital Management Committee, (1957) 2 All.E.R. and is a well-known standard used in determining negligence on part of a medical practitioner. The Bolam Test boils down to the simple rule that, if a doctor is acting in accordance with a responsible body of medical opinion, then, he/she cannot be held guilty for negligence. Thus, when obtaining consent, the doctor needs to provide full information to the patient to such an extent which is accepted by a body of medical opinion. In India, the Bolam test has broadly been accepted as the general rule for determining negligence by medical practitioners.

The Supreme Court further discussed the case of Canterbury v. Spence, (1972) (464) F 2d. 772, which laid down the principle of rationale of a doctor’s duty to reasonably inform a patient as to the treatment alternatives available and the risk incidental thereto. It laid down the ‘reasonably prudent patient test’ which required the doctor to disclose all material risks to a patient, to show an ’informed consent’.

The Hon’ble Apex Court thus, on the basis of previous Judgments and law on the subject of Consent, summarized principles relating to consent as follows : (i) A doctor has to seek and secure the consent of the patient before commencing a ’treatment’ (the term ’treatment’ includes surgery also). The consent so obtained should be real and valid, which means that : the patient should have the capacity and competence to consent; his consent should be voluntary; and his consent should be on the basis of adequate information concerning the nature of the treatment procedure, so that he knows what is consenting to.

(ii) The ’adequate information’ to be furnished by the doctor (or a member of his team) who treats the patient, should enable the patient to make a balanced judgment as to whether he should submit himself to the particular treatment as to whether he should submit himself to the particular treatment or not. This means that the Doctor should disclose (a) nature and procedure of the treatment and its purpose, benefits and effect; (b) alternatives if any available; (c) an outline of the substantial risks; and (d) adverse consequences of refusing treatment. But there is no need to explain remote or theoretical risks involved, which may frighten or confuse a patient and result in refusal of consent for the necessary treatment. Similarly, there is no need to explain the remote or theoretical risks of refusal to take treatment which may persuade a patient to undergo a fanciful or unnecessary treatment. A balance should be achieved between the need for disclosing necessary and adequate information and at the same time avoid the possibility of the patient being deterred from agreeing to a necessary treatment or offering to undergo an unnecessary treatment.

(iii) Consent given only for a diagnostic procedure, cannot be considered as consent for therapeutic treatment. Consent given for a specific treatment procedure will not be valid for conducting some other treatment procedure. The fact that the unauthorized additional surgery is beneficial to the patient, or that it would save considerable time and expense to the patient, or would relieve the patient from pain and suffering in future, are not grounds of defence in an action in tort for negligence or assault and battery. The only exception to this rule is where the additional procedure though unauthorized, is necessary in order to save the life or preserve the health of the patient and it would be unreasonable to delay such unauthorized procedure until patient regains consciousness and takes a decision.

(v) The nature and extent of information to be furnished by the doctor to the patient to secure the consent need not be of the stringent and high degree mentioned in Canterbury but should be of the extent which is accepted as normal and proper by a body of medical men skilled and experienced in the particular field. It will depend upon the physical and mental condition of the patient, the nature of treatment, and the risk and consequences attached to the treatment.

The Apex Court further observed that in the present case the Appellant gave signature on the consent form for surgery which stated that she was to undergo “diagnostic and operative laparoscopy.” However, there was no mention of any abdominal hysterectomy and bilateral salpingo-oopherectomy on any of the three forms that she signed. Consent was an essential element which was a pre-requisite for a medical procedure such as abdominal hysterectomy and bilateral salpingo-oopherectomy and the same was absent in the present case. Furthermore, the abdominal hysterectomy and bilateral salpingo-oopherectomy did not fall under the exception of necessity, thus the Respondent No.1 was held guilty of assault and battery. Hence, this amounted to deficiency in service. However, the Respondent No.1 was not held guilty under negligence as the act of the Respondent No.1 was proper according to the Bolam Test and prior judgments of the court.

The above Judgement is a landmark Judgment while deciding the issue of Informed Consent in cases of Medical Negligence and has been cited in more than 26 cases by different Courts. Some of the recent cases are as follows:

Thus, based on the aforesaid principles, the Supreme Court allowed the Appeal and set aside the order of the Commission. The Court held that in view of the fact that there was no consent by the Appellant for performing hysterectomy and salpingo-oopherectomy, performance of such surgery was an unauthorized invasion and interference with Appellant’s body which amounted to a tortious act of assault and battery and therefore a deficiency in service therefore partly allowed the Appellant’s claim and directed the Respondent No.1 to pay to the Appellant a sum of Rs.25,000/- as compensation with interest at the rate of 10% per annum from 19.11.2003 (the date of the Order of Commission) till date of payment. The Appellant was also allowed costs.