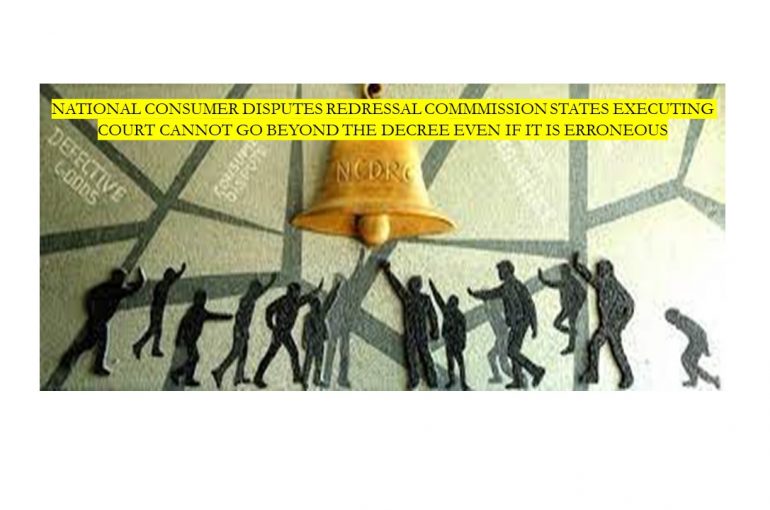 In a recent Execution Petition, a single Member Bench of the National Consumer Disputes Redressal Commission (NCDRC), New Delhi, comprising of Justice R.K. Agrawal, passed a Judgement dated 16.08.2022 in ‘Pawan Kumar v. Orris Infrastructure Pvt. Ltd. & Anr., Execution Application No. 148 of 2020 in CC/2011/2017’ and held that the Executing Court cannot go beyond the decree even if it is erroneous.

Additionally, the Complainant had booked a second flat and was allotted Flat No. 1001 (Flat 2) initially, which was subsequently cancelled and then a new flat (Flat No. 1201) was allotted to him. The Complainant filed Complaint bearing No. 562 of 2018 before NCDRC for refund of the amount paid for Flat 2. The NCDRC vide Order dated 20.07.2020, directed the Respondent to refund the amount paid by the Complainant for Flat No. 1001, along with interest at the rate of 9% per annum. However, the Respondent failed to comply with the Orders dated 19.08.2019 and 20.07.2020.

The Complainant filed the present Execution Petition bearing No. 148 of 2020 before NCDRC for the execution of these Orders. The Respondent contended that Greenopolis Project was developed by Three C Shelters as per a Development Agreement dated 02.11.2011 and the Respondent had no development rights over the Project. The NCDRC referred to National Company Law Tribunal Judgement in the matter of “Orris Infrastructure Pvt. Ltd. vs. Three C Shelters Private Limited” (IA 2482/ND/2021 & IA/2902/ND/2021) where it was decided that on the strength of collaboration agreement dated 02.11.2011, the status of Three C Shelters is merely that of a ‘contractor’ and not ‘Statutory License Holder’, of Project Greenopolis. Accordingly, the said contract does not vest Three C Shelters Pvt. Ltd. with any right, title and interest in Greenopolis project.

Further NCDRC considered the issue that whether the proceedings under Section 27 of the Consumer Protection Act, 1986 can be initiated against Managing Director/Director of the Judgment Debtor Company. The NCDRC answered this issue with reference to the Judgement of the Hon’ble Supreme Court in ‘Lalit Kumar Jain vs. Union of India & Ors.’ (2021) SCC Online SC 396’, and rejected the objections raised by the Respondent regarding the maintainability of the Complaint against the Managing Director of the Respondent Company.

The Respondent Company contended that insolvency proceedings had been initiated against Three C shelters and Three C Shelters is the owner of Greenopolis project as per Development Agreement dated 02.11.2011. The Respondent pleaded before NCDRC for consideration of the insolvency proceedings against Three C Shelters and requested to consider the reports for the same. The NCDRC refused to so and while doing so relied on the Judgement of the Supreme Court in the matter of ‘Satyawati vs. Rajinder Singh and Another’ (2013) 9 SCC, 491)’, where it was held that “ Looking to the facts of the case and upon hearing the learned counsel, we are of the view that the order passed by the executing court dated 16-3-2009, which has been confirmed by the High Court is not correct for the reason that the executing court ought not to have considered other factors and facts which were not forming part of the judgment and the decree passed in favour of the appellant-plaintiff. Once the decree was made in favour of the appellant-plaintiff, in pursuance of the judgment dated 19-1-1996 delivered by the District Judge, Faridabad, in our opinion, the executing court should not have looked into other reports which had been submitted to it afterwards.”

The NCDRC held that it is settled law that the Executing Court cannot go beyond the decree even if it is erroneous, it is still binding between the Parties. Thus, NCDRC did not consider the reports regarding the fact that Three C Shelters was undergoing insolvency proceedings. Accordingly, the NCDRC allowed the Execution Petition and directed the Respondent to deliver the possession of the flat within 6 months from the date of Order, which is, 16.08.2022 and also to refund the amount to the Complainant.