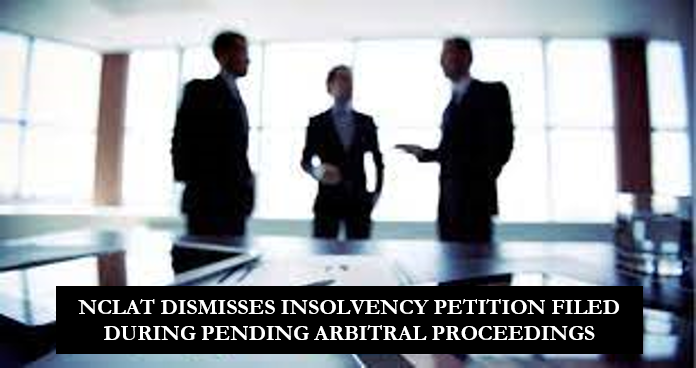 The National Company Law Appellate Tribunal (#NCLAT) has recently passed a Judgment dated 17-08-2021 in Mr. D.K. Mohanty, Managing Director, Orissa Minerals Development Company Ltd vs M/s. Jai Balaji Industries and Anr. and held that proceedings against #arbitralaward pending under Section 34 /37 of the #Arbitration and Conciliation Act 1996 (the Act) establish a ‘pre-existing dispute’ under the Insolvency and Bankruptcy Code 2016 (#IBC) and that in such a case, proceedings cannot be initiated under Section 9 IBC.

In this case, M/s. Orissa Minerals Development Company Ltd. (Corporate Debtor) entered into two Memorandum of Understanding (MoU) dated 13-08-2003 and 11-03-2004 with M/s. Jai Balaji Industries Ltd. (Operational Creditor), whereby, the Corporate Debtor agreed to supply 1 Lakh metric tons of Iron Ore per month and 7 Lakhs metric tons of Iron Ore per month under the MoUs respectively. However, owing to certain disputes, the Operational Creditor initiated arbitration proceedings under the MoUs and two Arbitral Awards dated 15-02-2010 and 22-02-2010 (Arbitral Awards) were passed in favor of the Operational Creditor.

Aggrieved, the Corporate Debtor filed Appeals challenging the said Arbitral Awards under Section 34 of the Act before the Kolkata High Court. But the High Court dismissed the Section 34 Applications, vide Orders dated 27-02-2012 and 29-02-2010.

As the Appeals filed by the Corporate Debtor under Sections 34 and 37 of the Act were dismissed by the Kolkata High Court, the Operational Creditor issued a Demand Notice under Section 8 IBC on 14-02-2020, to which the Corporate Debtor replied stating that they had filed Restoration Application on 17-12-2019, before the High Court, which was eventually restored on 02-03-2020 and that the dismissal was on the ground of default of appearance and not on merits.

Section 8 and 9 of IBC state that in case of a pre-existing dispute, IBC proceedings cannot be initiated. The said provisions have been reproduced below:

(2) The corporate debtor shall, within a period of ten days of the receipt of the demand notice or copy of the invoice mentioned in sub-section (1) bring to the notice of the operational creditor –

(a) existence of a dispute, if any, or record of the pendency of the suit or arbitration proceedings filed before the receipt of such notice or invoice in relation to such dispute…

(1) After the expiry of the period of ten days from the date of delivery of the notice or invoice demanding payment under sub-section (1) of section 8, if the operational creditor does not receive payment from the corporate debtor or notice of the dispute under subsection (2) of section 8, the operational creditor may file an application before the Adjudicating Authority for initiating a corporate insolvency resolution process.

However, the Operational Creditor filed a Petition under Section 9 IBC before the National Company Law Tribunal, Kolkata Bench (NCLT) to initiate corporate insolvency resolution process (CIRP) in respect of the Corporate Debtor. The Operational Creditor also contended that as on the date of issue of Demand Notice dated 14-02-2020, there were no pending arbitration proceedings and that the Appeal got restored only on 02-03-2020.

The NCLT passed an Order dated 30-09-2021, allowing the Section 9 Petition in respect of the Corporate Debtor for a default of Rs. 5,62,01.258/- and thereby, made the following observations:

Aggrieved, the Corporate Debtor filed an Appeal before the NCLAT. The NCLAT made the following observations in this case:

1) That in order to determine the existence of pre-existing dispute, the following criteria has to be satisfied:

i) the existence of the dispute and/or the suit or arbitration proceeding must be pre-existing i.e. it must exist before the receipt of the Demand Notice or invoice, as the case may be

ii) once an Appeal under Section 37 of the A&C Act, 1996, is restored it relates back to the original date of filing.

2) That in this case, the pre-existing dispute had started at the time when arbitration proceedings were initiated by the Operational Creditor itself and has been continuing since then.

3) Further, prior to the issuance of Demand Notice dated 14-02-2020, the Corporate Debtor had filed Restoration Application dated 17-12-2019 with an advance notice to the Operational Creditor, in order to restore the Appeal under Section 37 of the Act before the High Court.

4) Hence, based on the aforesaid observations, the NCLAT held as follows:

a) A pre-existing dispute continues even after the award has been passed, until the final adjudicatory process under Sections 34 / 37 of the Act is complete.

b) Further, in this case, it has been established that the Appeal relates back to the original date of filing i.e. 2012 and therefore, there was a pre-existing dispute prior to the date of issuance of the Demand Notice dated 14-02-2020.

Thus, the NCLAT held that the Operational Debt is a disputed debt and hence, the Appeal filed by the Corporate Debtor before NCLAT has been allowed and the NCLT Order dated 30-09-2021 has been set aside. Further, all orders passed by the NCLT for appointment of interim resolution professional (IRP) and declaration of moratorium, etc have been also set aside.