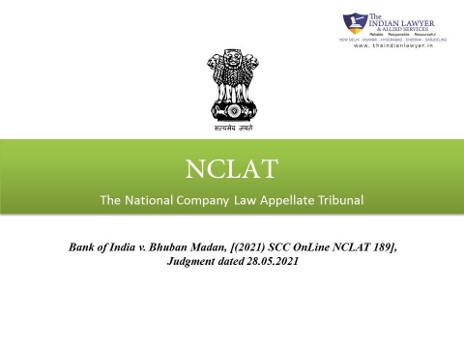 The Hon’ble National Company Law Appellate Tribunal (“#NCLAT”) in the case of Bank of India v. Bhuban Madan, [2021 SCC OnLine NCLAT 189], vide its Judgment dated 28-05-2021, held that the #Banks cannot #freeze #accounts and prohibit the ‘#CorporateDebtor’ from withdrawing the amounts as available on the date of the #moratorium for its day-to-day functioning.

Recently, in this particular case National Company Law Tribunal, Cuttack Bench, Cuttack (“NCLT”) has admitted an Application under Section 7 of the Insolvency and Bankruptcy Code, 2016, (‘IBC’) filed by the Financial Creditors against the Corporate Debtor, vide its Order dated 06-07-2017.

Thereafter, Mr. Bhuvan Madan, the Resolution Professional had filed an Application under Section 14 read with Section 17 and Section 60 (5) of the IBC before the NCLT seeking directions against the Banks and Financial Institutions seeking reversal of amounts received by the Appellant’s Banks during the Corporate Insolvency Resolution Process (“CIRP”) from the current accounts of the Corporate Debtor, on the following grounds:

The NCLT allowed the Application file by the Resolution Professional and directed the Company to be run as a going concern, engaging all Banks where the Corporate Debtor had accounts, to co-operate with the Resolution Professional for the operation of the accounts, vide its Order dated 02-03-2020. It further directed all the Banks to reverse the due amounts as appropriated by them. The NCLT observed that the Banks cannot debit any amounts from the account of the ‘Corporate Debtor Company’ after the order of moratorium, as it amounts to the recovery of the amount.

The Financial Creditor, the Bank of India (“Appellant”) filed an Appeal against the NCLT Order dated 02-03-2020. The Resolution Professional (“Respondent”) contended that during the CIRP of the ‘Corporate Debtor’, the Appellant recovered an amount of Rs. 41.73 Crores in preference over the other Creditors. It was further contended that the action of the Banks of recovering the receivables from the Cash Credit Account towards repayment of working capital limits has resulted in preferential payment in their favor. The ‘Preferential treatment’ in the instant case is not strictly as per what is provided under Section 43 but in terms of giving preference to the Appellants Banks over and above the dues of other Creditors.

The NCLAT while examining the contentions of the Parties observed and held in the following manner:

In view of the implied provision of law and judicial pronouncements, the Appeal preferred by the Appellants was dismissed by the NCLAT and observed that it did not find any illegality or infirmity in the Order dated 02-03-2020 passed by the NCLT directing the Banks and Financial Institutions to reverse the amounts to the account of the Corporate Debtor. The NCLAT also held that the Banks cannot freeze accounts and prohibit the ‘Corporate Debtor’ from withdrawing the amount for its day-to-day functioning.