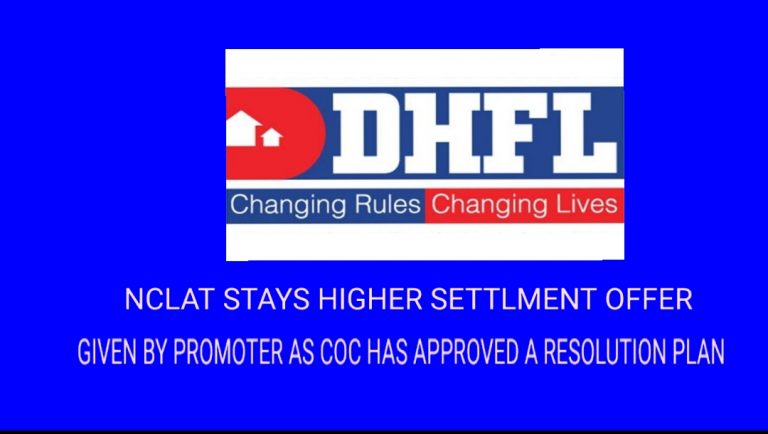 The Hon’ble National Company Law Appellate Tribunal, New Delhi (“#NCLAT”) in the case of Union Bank of India on Behalf of the Committee of Creditors of Dewan Housing Finance Corporation Ltd. versus Kapil Wadhawan & Ors. [CA (AT) Insolvency No. 370/2021], vide its Judgment dated 25-05-2021 passed an interim order staying the operation of the National Company Law Tribunal, Mumbai Bench (“#NCLT”) Order dated 19-05-2021 that directed the Committee of Creditors (“#COC”) to consider a 2nd and higher settlement offer from a #promoter of #DHFL, despite the COC having approved a #ResolutionPlan given by another party.

In 2019, the Dewan Housing Finance Corporation Ltd (“DHFL”) had defaulted on its payment obligations in respect of bank and market borrowings. As a result, the Reserve Bank of India (RBI) filed CP (IB) 4258 of 2019 for initiation of Corporate Insolvency Resolution Process (CIRP), which was admitted by the NCLT vide Order dated 03.12.2019 and appointed Mr. R Subramaniakumar as the Administrator. The COC was appointed and Expression of Interest (EOI) was issued for acceptance of resolution plans from various Resolution Applicants.

The Appellant apprised the Administrator, COC, and RBI regarding the real value of the assets of DHFL and in 2nd Proposal submitted by him assured full principal repayment to all creditors. The Appellant got to know that the proposals received from various Resolution Applicants did not remotely reflect the true value of DHFL and its assets.

The Applicant by his letter dated 29-12-2020, forwarded a further proposal (“2nd Settlement Proposal“) to the Administrator, COC for DHFL and RBI. But no reply was received towards acceptance or rejection of the same.

As a result, the Appellant filed an Application before the NCLT and sought a direction to the RBI, through the agency of Administrator, to place the 2nd Settlement Proposal before the COC for consideration. The COC contended that Section l2A of the Insolvency and Bankruptcy Code, 2016 (‘IBC’) requires that any settlement proposal be placed only by the Applicant who initiated the insolvency process, viz. the RBI failing this, they would not be entitled to consider the proposal. The Administrator, COC, and RBI together also argued that the NCLT has no power or jurisdiction to direct any Applicant to place any settlement proposal for the consideration of the COC.

Referring to the inherent power under Rule 11 of the National Company Law Tribunal Rules, 2016, the NCLT has power to make such order as may be necessary for meeting the ends of justice or to prevent the abuse of the process of the Tribunal.

The NCLT, vide its Order dated 19-05-2021 held and observed that the Settlement Proposals submitted by the Appellant has offered approximately Rs 91,158 Crores which is more than Rs. 54,512 Crores of the next highest bidder who offered Rs. 37,250 Crores. Since this Settlement Proposal is higher by 1.5 times of the value of the highest bidder the same needs due consideration/reconsideration by the Administrator/COC.

The Union of India on behalf of the COC challenged the NCLT Order dated 19-05-2021 before the NCLAT on the ground that original promoter who was ineligible under Section 29A of the IBC has taken an alternate route to enter as a resolution applicant by sending Settlement Proposals which were not in accordance with provisions under Section 12A of IBC with the motive of delaying the CIRP against DHFL.

The NCLAT heard the contentions of the Parties and while considering the facts on record it was observed that the Administrator and COC made a hurried consideration of the 2nd Settlement Proposal. On the other hand, the Appellant raised various legal issues as to how the settlement proposal has been styled as a precursor or pre-stage process of Application under Section 12A of IBC.

The NCLAT observed that the case is at the stage where a Resolution Plan had been approved by the COC before the NCLT. The Bench further referred to the Regulation 30A of CIRP Regulations, which requires reasons to be given for Application under Section 12A of IBC if filed after issue of EOI.

Therefore, in the above circumstances, the NCLAT held that the NCLT must first decide the Application filed by the Administrator under Section 30 read with Section 31 of IBC which was for approval of the Resolution Plan approved by COC. The NCLAT therefore stayed the operation of the NCLT Order dated 19-05-2021.

Aggrieved by the NCLAT Order dated 25-05-2021, the Appellant has approached the Supreme Court seeking a stay on the NCLAT Order, which stayed the NCLT Order dated 19-05-2021. The Petition also sought directions for COC to consider his 2nd Settlement Proposal in view of the fact that the 2nd Proposal was 1.5 times higher in value compared to the approved Resolution Plan and would be in the interest of the Company and its creditors.

Presently, the matter is pending before the Hon’ble Supreme Court of India and will be reported in the Blog once it is decided by the Supreme Court.