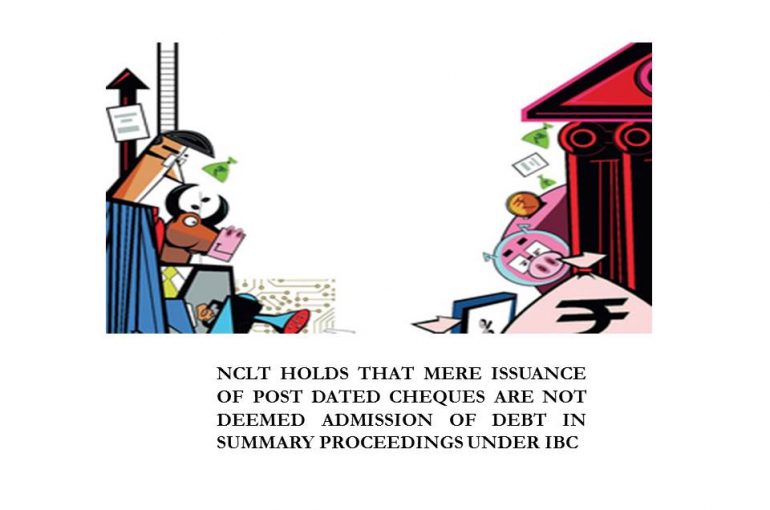 In the present case, N.C. Goel and Maya Goel (Applicants/Financial Creditors) had filed an Application under Section 7 of the Insolvency and Bankruptcy Code, 2016 (Code) r/w Rule 4 of the Insolvency & Bankruptcy (Application to Adjudicating Authority) Rules, 2016 before the NCLT, Allahabad, seeking the initiation of Corporate Insolvency Resolution Process (CIRP) against Piyush Infrastructure India Pvt. Ltd. (Respondent/Corporate Debtor). The Respondent had defaulted in making a payment of an amount of Rs. 12,00,000/- (excluding interest).

However, the Respondent contended that no interest has ever been paid to the Financial Creditor and since no interest was payable, the said transaction could not be considered as a financial debt within the meaning of section 5(8) of the Code. It also claimed that there was no written Agreement between the Parties. They further contended that the transactions pertain to 2012 to 2014. Hence the Application filed by the Financial Creditors was barred by limitation.

In the Rejoinder filed by the Financial Creditor it was argued that the Applicant had already preferred a Complaint under section 138 of Negotiable Instruments Act, 1881, and the same was pending adjudication before the appropriate legal forum. With respect to the contention pertaining to limitation, the Financial Creditor claimed that the cheques were given from January 2018 till December 2018 which were dishonoured. Hence, from the date of dishonour of these cheques, the Application filed under Section 7 was maintainable.

After perusing the facts of the case, the Bench observed that the loan amount was given by the Applicants between the period of 2011 to 2016. However, since there were no documents available, no default could be established. “The date of default can only be calculated when the tenure of the loan is established, or when there is a demand for repayment. In the present case there is nothing to establish this.”

“In summary jurisdiction, without adequate documentation, it is difficult to establish the purpose for which the money was lent and accepted. It is also not possible to establish whether there was any interest required to be paid. The time value of money is an important factor to be considered in order to establish whether this is a financial debt. Ex facie, this appears to be a petition which has been filed for recovery of money and not for resolution of the corporate debtor. The Insolvency & Bankruptcy Code, 2016, should not be allowed to be used as an easy way of recovery of money.”

Further, the Tribunal made an observation that receipt of interest was only evidenced through two letters of the Respondent, thus the claim regarding receipt of interest remain unsubstantiated. Also, the copies of the post-dated cheques issued by the Corporate Debtor for repayment of principal amount have been enclosed. However, it could not be deemed to be an unqualified admission of debt because the presumptions drawn under section 118 and section 139 of the Negotiable Instruments Act, 1881, are rebuttable presumptions.

With these observations, the NCLT dismissed the Application filed by the Financial Creditor. However, liberty was given to them to pursue remedy under any other law.