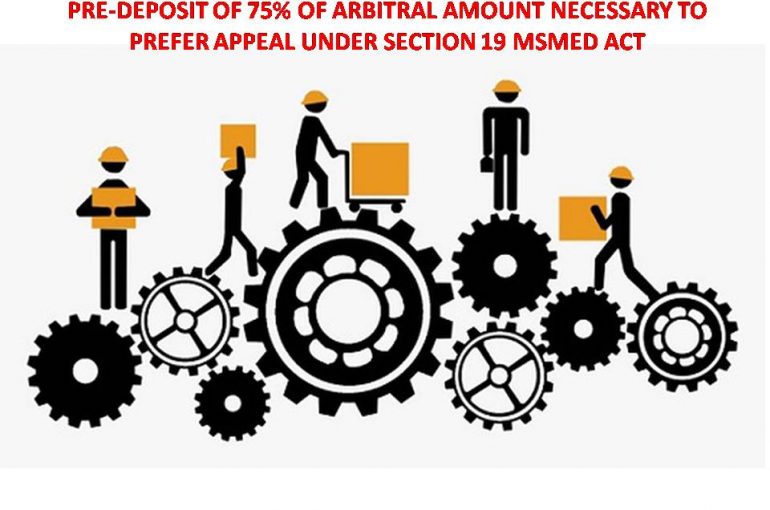 In a recent Civil Appeal, the Supreme Court with corum comprising of Justice M.R Shah and Justice B.V Nagarathna in the matter of ‘M/s Tirupati Steels vs. M/s Shubh Industrial Component and Anr.’ (Civil Appeal No. 2941 of 2022) vide Order dated 19.04.2022 has set aside the Order dated 09.04.2019 (Impugned Order) passed by the Hon’ble High Court of Punjab and Haryana in Commercial Appeal Case No. FAOCOM/4/2019 wherein the High Court had directed the first appellate court to proceed under Section 34 of Arbitration Act, 1996 without making pre-deposit of 75% of the awarded amount .

On the account of failure of conciliation of the dispute, the same was referred to an Arbitrator who was appointed by the MSME Facilitation Council at Chandigarh. The Arbitrator passed an award dated 16.07.2018 in the favour of the Appellant. Thereafter, the Appellant filed an Execution Petition before the District and Session Judge, Faridabad. Subsequently Respondent No.1-Judgment Debtor filed an Application under Section 34 of the Arbitration Act, 1996 for setting aside the Arbitral Award before the Special Commercial Court, Gurugram.

That the Appellant i.e the original Decree Holder, thereafter filed an Application under Section 19 of the MSME Act, 2006, requesting that the Respondent No.1 be directed to deposit 75% of the Arbitral Award (in order to get the appeal admitted). The Special Commercial Court, allowed the Application filed by the Appellant and granted a period of 6 weeks to the Respondent No. 1 to deposit the 75% of the Arbitral Award.

Feeling aggrieved by the Order of Special Commercial Court, the Respondent No.1 filed the Commercial Appeal FAOCOM/4/2019, before the High Court of Punjab and Haryana. By way of Impugned Order, the High Court held that the condition of deposit of 75% of Arbitral Award under Section 19 of MSMED Act, 2006 is directory and not mandatory.

Feeling aggrieved and dissatisfied by the Impugned Order, the Appellant i.e the Decree Holder preferred the present appeal. The Appellant relied on ‘Goodyear (India) Ltd. Vs Norton Intech Rubbers (P) Ltd.’(2012) 6 SCC 345, wherein it is clearly observed by the Apex Court that the condition of pre-deposit of 75% of Arbitral Award is mandatory in nature in order to prefer an appeal before the appellate court. Though it is the discretion of the appellate court to call for the said amount in instalment, if in its opinion it shall cause undue hardship to the person preferring an appeal.

The Apex Court in its observation held that, the Impugned Order passed by the  High Court of permitting the proceedings under Section 34 of the Arbitration Act, 1996, without insistence of making a pre-deposit of 75% of awarded amount, is unsustainable and the same is set aside and quashed.

The Apex Court directed the Respondent No. 1 i.e Judgement Debtor to make a deposit of 75% of the awarded amount before its Application under Section 34 of Arbitration Act, 1996 challenging the award is entertained and considered on merits. The Supreme Court therefore upheld that pre-deposit of 75% of awarded amount is mandatory requirement under the MSME Act.